An online food delivery giant just got a lot bigger.

Just Eat Takeaway's (JTKWY 2.79%) $7.3 billion takeover of Grubhub, which was announced a year ago, finally closed on June 15. Grubhub's investors received 0.671 shares of the new American depositary receipts for each of their original shares, and the merged company will become one of the world's largest third-party food delivery platforms outside of China.

Grubhub's investors might be wondering if they should sell their new shares or put some faith in the new company. Investors who don't already own the stock are also likely wondering if Just Eat Takeaway will fare any better than Grubhub -- which lost nearly 50% of its value over the past three years amid fierce competition from DoorDash (DASH -5.39%) and Uber Technologies' Uber Eats. Let's review the two separate companies, how they'll fare after the merger, and whether or not it's a worthy investment. 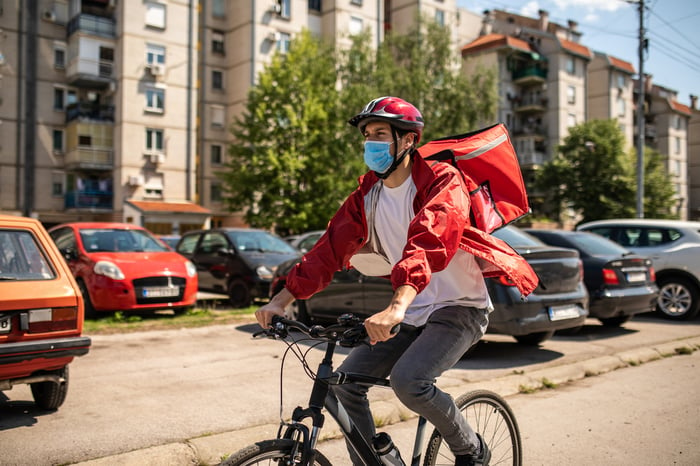 Takeaway.com was founded in the Netherlands in 2000. It subsequently expanded across Europe, Canada, Israel, and Vietnam via acquisitions, then agreed to buy U.K.-based Just Eat in 2019.

That merger, which closed last year, created Just Eat Takeaway. Just two months after the merger was approved, Just Eat placed its bid for Grubhub, one of the three largest delivery platforms in the U.S.

Grubhub was once the market leader, but it had fallen to third place behind DoorDash and Uber Eats when the deal was announced. Uber tried to buy Grubhub shortly before Just Eat stepped in with a higher bid, which caused Uber to buy Postmates instead.

How fast are these two companies growing?

Based on these figures, the combined company could generate 40% to 50% more GMV and revenue than the original Just Eat Takeaway in the first year after the deal closes. It would also be more geographically diversified than DoorDash, which still generates most of its revenue from the U.S., and compete more effectively against Uber Eats internationally.

Bottom-line growth could be messier

Merging the two companies could also cut costs by merging their infrastructure and eliminating redundancies. Economies of scale could then kick in and boost Just Eat's margins and profits.

Just Eat Takeaway clearly benefited from its improved scale, but Grubhub continued to struggle with rising expenses and intense competition. Simply put, the new Just Eat Takeaway's adjusted EBITDA margin should initially contract after it integrates Grubhub, and could remain under pressure as it attempts to keep pace with DoorDash and Uber.

Just Eat was firing on all cylinders before it took over Grubhub. In the first quarter of 2021, its GMV surged 89% year over year to 4.5 billion euros ($5.5 billion), with the U.K., Germany, and Netherlands markets leading the charge. Its orders accelerated year over year for the fourth straight quarter.

But both companies could face slower growth this year after the pandemic passes. Analysts had expected Just Eat Takeaway's revenue to rise 51% this year (without accounting for Grubhub) but increase just 23% in fiscal 2022. Integrating Grubhub's slower-growth business will likely throttle Just Eat Takeaway's top- and bottom-line growth after it laps the merger.

The combined company should have a comparable price-to-sales ratio, which makes it much cheaper than DoorDash, which still trades at 12 times this year's sales after tumbling nearly 40% from its 52-week high. Therefore, if Just Eat Takeaway continues expanding globally and turns Grubhub into a market leader again, it could be deeply undervalued relative to its long-term growth potential.

I own some shares of Grubhub, and I'm willing to give this new company a chance to grow. It's also still a decent investment for investors who are interested in the food delivery market but aren't willing to pay a premium for DoorDash.

Why Just Eat Takeaway.com Defied the Tech Sell-Off This Week