Please ensure Javascript is enabled for purposes of website accessibility
Log In Help Join The Motley Fool
Free Article Join Over 1 Million Premium Members And Get More In-Depth Stock Guidance and Research
By Leo Sun - Jun 16, 2021 at 9:00AM

The "little game engine that could" still has a lot to prove.

Roblox (RBLX -3.16%) has attracted a stampede of bulls since its direct listing in March. The gaming company's stock opened at $64.50 on its first trading day, well above its reference price of $45, and subsequently advanced to the low $90s -- even as many high-growth stocks lost their momentum.

Roblox impressed investors with its unique business model, robust growth rates, and lack of meaningful competitors -- but will its stock continue climbing over the next five years? Let's delve deeper into Roblox's strengths, weaknesses, and valuations to find out. 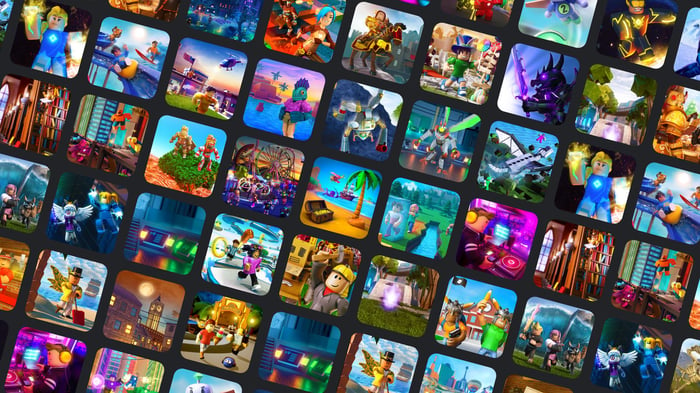 A self-sufficient gaming platform for tweens

Roblox lets people create video games with a simple block-based system. The simplicity of its platform, which doesn't require any coding experience, drives its growth among tween users. More than half of its daily active users (DAUs) are currently under the age of 13.

Roblox's creators can share their games with other users, promote them on streaming platforms like Amazon's Twitch, and monetize them with in-game features or cosmetic upgrades for avatars. Roblox enables these transactions with an in-game currency called Robux. Players buy Robux to pay creators, who can then covert the currency back to U.S. dollars at a set exchange rate.

This self-sufficient cycle differentiates Roblox from professional game development engines like Unity Software, and shares more qualities with Microsoft's Minecraft. The bulls claim this virtuous cycle will enable Roblox to keep growing, but the bears believe it's a fad that is overly dependent tween users.

A look back at Roblox's growth rates

Its growth significantly accelerated throughout the pandemic as more students stayed at home to attend online classes. That acceleration is clearly reflected in its revenue growth.

How much could Roblox grow over the next five years?

Analysts expect Roblox's revenue to rise another 186% to $2.65 billion for the full year. But for fiscal 2022, they expect its revenue to rise just 19% to $3.14 billion as the pandemic ends and it faces tough year-over-year comparisons.

Roblox's net losses are still widening as its cloud infrastructure costs rise. It also paid out over a third of its revenue as "developer exchange fees," or the conversion of Robux back to U.S. dollars, last year.

Wall Street expects Roblox to turn profitable this year as it gradually narrows its losses, then grow its earnings 3% in fiscal 2022.

But that outlook could still be too optimistic, since it could be tough for Roblox to reduce the exchange rate for its developer exchange fees without alienating developers. Its recent introduction of premium subscriptions for players, which enable them to buy cheaper Robux, could exacerbate that pressure.

Based on those rosy projections, Roblox's stock trades at 115 times forward earnings and 20 times this year's sales. Those frothy valuations suggest there's too much growth baked into its stock price.

Roblox believes it can keep growing by gaining more overseas users (outside the U.S. and Canada), who accounted for 70% of its DAUs and 32% of its revenue in the first quarter of 2021. One of the most promising markets is China, where it's partnered with Tencent Holdings, the world's largest video game publisher.

It could also launch new features to bolster its appeal with older gamers and developers, and its transition toward subscription services could generate more stable recurring revenue and lock in more users. It could also strike more favorable cloud infrastructure deals to reduce its operating expenses.

However, Roblox's overwhelming dependence on tween users is still risky. It must constantly refine its safety measures to protect those users from online predators, and some of those players might eventually move on to other games as they grow older. Its content creators could also graduate to more complex game engines like Unity, or simply quit if Roblox reduces Robux's real-world value.

Where will Roblox be in five years?

Roblox is still growing rapidly, but we should be skeptical of analysts' forecasts -- it's too early to tell if its pandemic-induced growth spurt is sustainable or if it can rein in its high operating expenses.

I believe Roblox is a promising company, but its stock looks overvalued. Therefore, the stock might climb higher over the next five years, but I don't expect it to generate multibagger gains anytime soon.

Roblox Is Burning Cash: What Should a Long-Term Investor Do?