Please ensure Javascript is enabled for purposes of website accessibility
Log In Help Join The Motley Fool
Free Article Join Over 1 Million Premium Members And Get More In-Depth Stock Guidance and Research
By Jason Hawthorne - Jun 17, 2021 at 8:10AM

Republicans and Democrats want to keep the changes that increased access to telehealth for tens of millions of Americans.

Agreement between Republicans and Democrats is rare these days. However, one issue they seem to see eye to eye on is telehealth.

The pandemic prompted the Department of Health and Human Services (HHS) to make several changes during the pandemic to increase access to virtual care for those covered by Medicare, and many want to make those changes permanent. More than 50 senators -- about half Republican and half Democrat -- have introduced the Connect For Health Act to do just that.

That's good news for telehealth providers Teladoc Health (TDOC -8.87%) and American Well (AMWL -9.96%) -- also known as Amwell. The pair has seen spiking demand over the last 18 months, but that hasn't necessarily translated to gains in the stock price. Congress' move to entrench telehealth as a viable alternative could help change that. 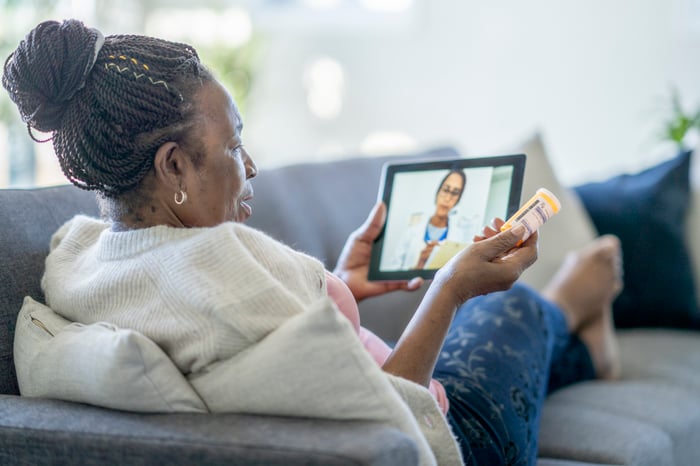 The bill would remove the geographic restrictions that forced many people -- especially in rural areas -- to go to a healthcare setting to participate in a telehealth call. If the legislation passes, Teladoc and Amwell should see much of the excess demand from the pandemic remain. That new baseline could alleviate some of Wall Street's concern about volume as things get back to normal in the U.S.

The best-known virtual care provider was in the right place at the right time in 2020. The company grew revenue 145% compared to 2019.

Some of that was thanks to the acquisition of Livongo Health, a chronic-condition management company that had its own virtual-care expertise. It followed last year's growth with 151% revenue growth in the first quarter of 2021. Despite that, the stock sits nearly 50% from its high.

Last year's policies that increased access to virtual care had a profound impact. CEO Jason Gorevic pointed to about half a million new Medicare Advantage members that the company picked up in the first quarter of 2020, thanks to the changes.

But don't take the company's word for it. A July 2020 report from HHS highlighted the jump in Medicare services accessed via telehealth. The percent of fee-for-service claims as a percentage of all claims rose from 0.1% in February 2020 to 44% in April.

Although it didn't contribute a meaningful portion of Livongo's revenue, the pandemic has placed more importance on the service. Here's one data point: Insurer Cigna said that virtual care made up about 1% of behavioral-health sessions prior to 2020. That number has grown to about 25% as of May. In fact, more than 60% of behavioral-health patients report having at least one virtual session.

If Congress agrees that virtual care is a priority and is able to solidify increased access to Medicare patients, insurers will follow suit. For Teladoc, that could mean that the elevated run rate due to the pandemic should be the new normal. Removing that uncertainty should be good for patients and shareholders.

A month after Teladoc announced its acquisition of Livongo, Amwell went public, backed by $100 million from Alphabet's Google Cloud business. It ended its abbreviated first year as a public company with 65% revenue growth and 950% more providers on its network, compared to the year before.

However, in the company's first-quarter 2021, revenue was only up 7% year over year and its stock is now more than 40% below where it closed its first day of trading. Despite the struggles, the move by Congress offers a silver lining.

If the expansion of telehealth for Medicare is made permanent, it moves the industry further toward the future that the company is betting on. Amwell is developing a platform called Converge, which is designed to incorporate all of a client's subscription services and serve as a platform for third parties to develop apps. These apps offer a potential new revenue stream for the company. Their success will be much more likely if access to telehealth covers more patients and more steps in their journey through each healthcare episode.

Like Teladoc, Amwell is rolling out its own virtual primary-care offering. The company is also seeing a large uptick in virtual visits for behavioral health, as well as a higher mix of specialty visits. Management hasn't broken out the impact of the expanded coverage for Medicare, but it repeatedly mentions the program as both a risk and growth opportunity in its annual report.

A bill like Connect for Health would signal to the industry at large that the trend toward telemedicine is accelerating. It would also validate the company's heavy investments in a virtual-care platform, which would be cheered by shareholders and likely rewarded by Wall Street.