Please ensure Javascript is enabled for purposes of website accessibility
Log In Help Join The Motley Fool
Free Article Join Over 1 Million Premium Members And Get More In-Depth Stock Guidance and Research
By Bradley Freeman - Updated Jun 18, 2021 at 11:18AM

Why this company is a long-term winner.

The consumer loan industry is somewhat antiquated, to put it kindly. Just 48% of Americans have access to prime credit -- yet 80% have never defaulted. Why the imbalance? Traditional consumer credit metrics fail to appropriately assess risk for people with limited or no credit history, causing millions of worthy borrowers to fall through the cracks.

Upstart Holdings (UPST -4.83%) is a newly public consumer loan company attempting to broaden access to capital and fix this systemic issue. Here's what it does, how things are working, and why I think it's a buy. 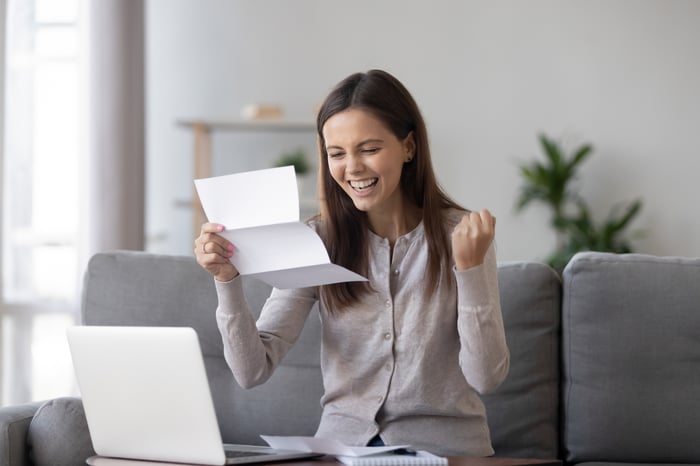 Upstart is a true banking partner. Instead of funding loans itself, Upstart builds loan products for banks and offers quotes within its own site on behalf of banks. Upstart is not attempting to replace legacy banks and creditors, but instead trying to uplift these entities via larger, higher-quality loan operations.

Specifically, Upstart funds just 2% of the loans it sources with its own balance sheet, with the other 98% being funded by banking partners, as well as the pooling and selling of these loans to other institutions. Upstart collects fees per loan sourced, meaning it can be seen as an ally for banks rather than an adversary.

Why is that important? Upstart is still a relatively new company and therefore cannot match the sheer quantity of data that century-old banks can access. Therefore, Upstart's supporting role makes it easier for banks to decide to share the keys to their data kingdoms, and that is where Upstart realizes its edge.

Upstart's risk algorithms can analyze over 1,600 unique data points on a consumer (vs. 22 in 2014), while banks typically leverage 8 to 15 data points over more time. As a general rule, the less cookie-cutter the risk quantification, the more accurate it will be.

Upstart can take into account things like education, cost of living, and so much more because it's using machines rather than people. Simply put, artificial intelligence can digest and scale far more information than we can, and do so more quickly. Perhaps that's why Upstart has expanded from 10 banking partners to 15 since going public in 2020, as well as recently becoming a preferred partner for the National Association of Federally Insured Credit Unions (NAFCU).

It's one thing to talk about data, algorithms, and machine learning advantages, but it's another thing to translate that edge to performance. Upstart is doing just that.

According to the Consumer Financial Protection Bureau (CFPB), the company is able to drive a 16% lower annual percentage rate (APR) vs. the average. Beyond that, Upstart delivers a 27% spike in approval rates for banks while, importantly, holding loss rates constant, also according to CFPB. Upstart isn't just talking a big game, it's delivering.

These leads give Upstart its core value proposition, and maintaining both will be vital to the success of this investment. Along those lines, CEO and founder Dave Girouard told investors in the last earnings call that Upstart's industry leads in APR, approval, and default continued to grow thanks to an update to the company's algorithm blend. He did not specify the exact boost.

Finally, the company also updated its user interface to lower user friction and boost conversion rates. Conversion rate represents the number of loans Upstart sources divided by the number it quotes. As a result, conversion rose from 14.1% to 22% year over year, and is an explicit sign to the company's leadership to spend more aggressively on growth.

How it's going and where we go from here

The company's most recent quarter was remarkable. Revenue soared 90% year over year, with the company raising its 2021 sales guidance by a hefty 20%. Its contribution margin (which represents revenue from fees minus borrower acquisition, verification and servicing costs) spiked from 38% to 48% year over year. Impressively, the company already has a positive net income margin of 8.3%. And these results came despite loan demand taking a hit from government stimulus, meaning there are even more tailwinds ahead.

At Friday's prices, Upstart trades for 14 times sales for the next 12 months and 210 times forward-looking earnings -- not ridiculous when looking at other hyper-growth names, but not cheap, either. In my view, the execution warrants the valuation, but that is a decision you must make for yourself.

Upstart is a winner

The company is poised to dominate going forward, and I think investors should take a serious look.