Please ensure Javascript is enabled for purposes of website accessibility
Log In Help Join The Motley Fool
Free Article Join Over 1 Million Premium Members And Get More In-Depth Stock Guidance and Research
By Billy Duberstein - Jun 20, 2021 at 6:54AM

Didi Chuxing filed paperwork ahead of a potential initial public offering in July.

The dominant ride-hailing service in China, Didi Chuxing, recently filed paperwork to go public on U.S. exchanges. It filed an F-1 to list American Depository Shares either on the NYSE (a subsidiary of Intercontinental Exchange) or the Nasdaq, likely some time next month.

Uber (UBER 0.06%) and Lyft have both had somewhat lackluster results since going public, with Uber roughly flat and Lyft down about 25% since their respective IPOs (initial public offerings). Of course, they both had to endure COVID-19 during that time.

Didi also saw a slowdown in results last year, but traffic has been rebounding quickly as China recovers from COVID, so Didi is looking to raise money on optimism over reopening. There are a few distinguishing characteristics that could make Didi a more compelling investment than either Uber or Lyft, but there are also some added risks. Does the opportunity outweigh the potential pitfalls? 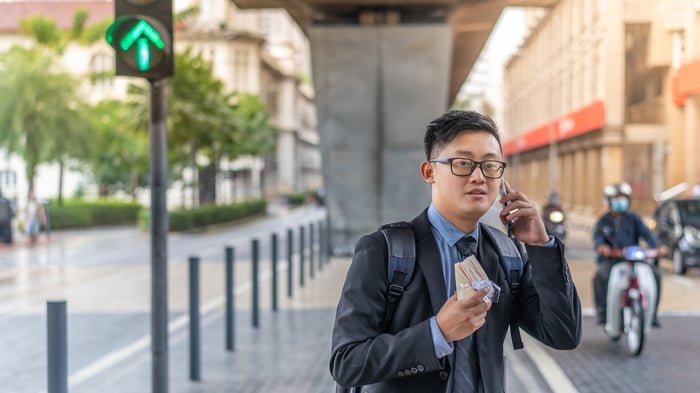 Didi has a lot of good things going for it

Some of the positives around Didi have to do with its entrenched position in China, where it had over 80% of the country's shared-mobility market in 2020. With that leading position, Didi could be a big beneficiary of the rise of the Chinese middle class. China's shared-mobility market is forecast to grow 270% over just the next five years, from 233 billion yuan (also known as renminbi) today to RMB 862 billion in 2025, for an average annual growth rate of 29.9%. That's a higher average growth-rate forecast than for the global shared-mobility market.

Second, shared mobility is a more affordable option for people in China, especially as the population enters the middle class and flocks to more densely populated cities. According to China Insights Industry Consultancy (CIC), the average cost of shared-mobility services is 2.9 yuan per kilometer in China, versus 4.1 yuan per kilometer for private car ownership. That's in contrast to the U.S., where it's estimated that shared mobility is about 2.2 times more expensive than private car ownership, on average.

Unlike Uber, Didi doesn't offer food delivery in China (though it does in international markets). However, also unlike Uber, Didi is developing some innovative services in auto servicing, electric vehicles, and autonomous driving technology. In 2018, the company launched auto solutions, leveraging Didi's size to obtain discounts on leases, fuel prices, and repairs for its drivers, further lowering the cost of shared mobility.

Didi has also built out the largest network of electric vehicle charging stations in China, with about 30% of the market, according to the company. U.S. EV charging companies have seen a surge in interest this year with the new administration, so this could be another valuable ancillary service. Furthering its electric-vehicle goals, back in November, Didi even introduced its own EV built specifically for ride-hailing -- the D1 -- which it developed with an auto-manufacturer partner.

Maintenance, EVs, and autonomous initiatives are grouped in with Didi's bike-sharing service in a category called "other initiatives" which grew 19% last year, even as the core China mobility segment fell. Other initiatives almost tripled in the first quarter of this year, although it was an easy comparison to the pandemic-hit first quarter of 2020, and that segment now makes up a more significant 5% of total company revenue.

But familiar risks remain for Didi, as for all ride-hailing services

For investors who have studied Uber and Lyft, Didi also comes with some familiar drawbacks, including the fact that it's still losing lots of money. Yes, the company does claim it made a modest net income last quarter, but that was entirely attributed to investment gains it recorded by deconsolidating a subsidiary.

In reality, despite more than doubling revenue in the most recent quarter, Didi's operating loss also doubled, to just over $1 billion in Q1. While bulls would say a lot of this loss was due to greatly increased sales and marketing expenses, which increased 189%, bears might say that this could be a sign of intensifying competition.

Leading food-delivery service Meituan (OTC: MPNGF) started its own ride-hailing service a few years ago, and is an aggressive competitor. In addition, newer, smaller competitors have also sprung up in more local areas. Some caught on after 2018, when Didi drivers committed two homicides of passengers using its Hitch carpooling app, leading to boycotts. In 2019, even before COVID, growth slowed for Didi and ride-hailing in general, likely in response to these incidents.

Finally, Didi also has to contend with the labor issues that continue to hound Uber and Lyft. Like the other two, Didi classifies its drivers as independent contractors, but it's recently come under pressure from Chinese authorities about its driver pay. While the company has vowed to improve driver pay, a new antitrust investigation into Didi is still in its early stages; that could come with a potential fine down the road, depending on what regulators find.

And of course, Didi also comes with the additional risk of being a Chinese stock. The U.S. government has banned American investors from owning stocks of any companies tied to China's military, and Chinese companies will be subject to more disclosure and transparency rules by U.S. auditors and regulators. While Didi is a consumer-facing company, the ongoing tension between the two nations is a risk to note.

According to the Wall Street Journal, Didi could come to market somewhere in the range of a $70 billion valuation, a bit less than Uber's current $92 billion market cap. It's a bit difficult to compare the two, since they operate in slightly different geographies and offer different products.

The constant is that both are burning lots of cash in an effort to gain scale and market power. But I'm still a bit unsure how all these ride-hailing platforms will eventually make real profits, especially with regulators watching these companies closely. It's quite possible profitability may only come with breakthroughs in autonomous driving. It's nice that Didi is still aiming for the autonomous-technology market, but that payoff is highly uncertain.

Given the risks, I'd probably stay on the sidelines for now, and watch how the stock moves -- and more importantly, how the company executes on growth and autonomy initiatives.