Please ensure Javascript is enabled for purposes of website accessibility
Log In Help Join The Motley Fool
Free Article Join Over 1 Million Premium Members And Get More In-Depth Stock Guidance and Research
By Jason Hawthorne - Jun 23, 2021 at 6:15AM

It might make a great investment, but it's hard to imagine a trillion-dollar scenario in the next decade.

Capturing life-changing gains takes time. But investors have different definitions of what it means to hold a stock for the long term. Data shows the average holding period was just five and half months as of last summer. The unusual situation last year propelled several stocks to incredible gains in the span of only a few months.

With the pandemic now smoldering in the U.S., many investors might be asking themselves if it's time to sell Moderna (MRNA -5.93%). It pulled off a remarkable feat in 2020, but the stock is up 1,000% since the beginning of last year. It will take an impressive second act to produce big gains from here.

Whatever those gains are, they will be a function of the diseases it targets, its success in developing new treatments, and how the market values its potential. 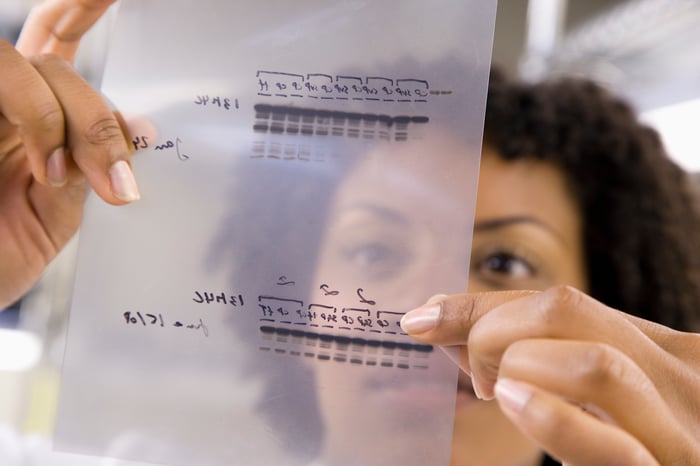 Almost any disease imaginable could be fought with messenger RNA (mRnA). Using mRNA to program which proteins a cell makes essentially turns the human body into a medicine factory. In the case of the SARS-CoV-2 virus (the one that causes COVID-19), Moderna's vaccine triggers production of the spike protein associated with the virus. After seeing it and marshaling a defense, the body is typically able to fight it off in future encounters -- at least for a while.

The Moderna COVID vaccine is one of many drugs in the company's pipeline. It is also exploring cancer therapies, cardiovascular blockages, and creating proteins inside organs where they are missing or defective. All in all, Moderna is currently developing 25 drug candidates.

The approach could allow it to expand its portfolio quickly each time it successfully delivers instructions to a type of cell. An example is its partnership with Vertex Pharmaceuticals. The companies are conducting early-stage research to fight cystic fibrosis. If it can get lung cells to produce a desired protein, it opens the door to other lung diseases. Like a computer running code, if the cell processes these instructions, it will process other instructions written in the same mRNA programming language.

That makes the addressable market for Moderna hard to calculate -- or really to even comprehend. For context, nearly $1.3 trillion was spent on medicines in the U.S. in 2020. Annual sales for drugs targeting the diseases listed in the company's pipeline surpass $250 billion.

The bridge to a trillion

Obviously, not all of those drugs will succeed. And even the ones that do will share the market with other drugmakers, probably even other mRNA companies. But it's not a stretch to think Moderna could parlay the cash from ongoing COVID vaccinations into several other blockbusters. And those blockbusters could be worth a lot.

Using cancer drugs as an example, Merck's Keytruda brought in $14.4 billion in sales last year while Bristol Myers Squibb's Revlimid generated $12.1 billion. Humira, AbbVie's arthritis drug, cleared almost $20 billion. In all, there were nearly 40 drugs that generated more than $2 billion in 2020 revenue. That's a lot of opportunity for a company with a disruptive approach.

For his part, CEO Stephane Bancel has said he is most excited about the respiratory combination vaccines that the company is developing. That would be a prophylactic combining protection from influenza, COVID, and respiratory syncytial virus (RSV).

Any prediction about 2030 is a guess, but projected market sizes for Moderna's most promising (and lucrative) areas of focus can inform it. Here they are, for the four areas where Moderna is likely to develop a therapy over the next decade.

Giving the company credit for retaining a meaningful 20% of the combined respiratory vaccine market -- and claiming the same in personalized cancer -- would yield about $8 billion in revenue in 2030. With no current CMV vaccine, we'll assume Moderna owns that opportunity to the tune of $3 billion per year. Add in one blockbuster solid-tumor drug generating $3 billion, and the company's annual revenue could be $14 billion.

Other biotech companies like Vertex, Regeneron, and Alexion all trade between six and eight times sales. Applying that range of multiples to the above scenario would only make Moderna an $84 billion to $112 billion company. For context, Moderna trades for about 5.4 times the revenue expected over the next year, and it has an $85 billion market capitalization.

That makes it clear that a lot has to go right for Moderna to reach a $1 trillion valuation by 2030. If it does, it would represent a more than 30% compound annual return from today. Those are gains any investor would be thrilled with. Unfortunately, even the rosiest scenario wouldn't get the company to that size.

First, assume the pricing of a combination respiratory vaccine is much higher than the current flu vaccine. That could increase the overall opportunity. If Moderna's jab took a large share, it might generate $20 billion in annual sales.

In the second rosy assumption, personalized vaccines become a widely used approach for fighting cancer. Moderna again takes significant share to the tune of $10 billion in revenue per year.

Lastly, the company is able to leverage what it learns in personalized cancer vaccines to develop several off-the-shelf gene therapies for solid tumors. If it develops a gene-based offering for each of the most prevalent diseases -- breast, lung, prostate, and colon cancer -- it could net another $20 billion per year. Recognizing the power of the mRNA platform, the market values the company at a premium to other biotechs, 10 times sales.

With all of that in its favor, Moderna would still only be a $500 billion company in 2030. Any investor would jump at that 22% compound annual return, but it isn't $1 trillion.

That doesn't mean it won't have that valuation one day. It just means that it will likely need the market to give it a lot of credit and an extremely high valuation to get there by the end of the decade.