Please ensure Javascript is enabled for purposes of website accessibility
Log In Help Join The Motley Fool
Free Article Join Over 1 Million Premium Members And Get More In-Depth Stock Guidance and Research
By James Brumley - Jun 27, 2021 at 8:02AM

Investing doesn't need to be complicated. In fact, simpler is probably better for your bottom line.

Do you want to retire rich, but don't want to make doing so a complicated affair? The two goals seem mutually exclusive. That is to say, if you want to build a million-dollar nest egg on average earnings, it's going to require a lot of complex investing strategies, and plenty of effort. That's how the proverbial "big guys" do it, right? If it's simple, it's got to be subpar.

Except that's not actually the case. When it comes to building a small fortune from just what's left over after paying all your monthly bills, simpler probably is better in terms of producing top returns. And it doesn't get any easier than just buying and holding the S&P 500 Index (^GSPC -0.16%), or an investable equivalent like the SPDR S&P 500 ETF Trust (SPY -0.17%).

Start by playing the odds

The exact figure has never been verified because it's impossible to track. But it's been estimated by plenty of market insiders that at least 80% of day traders end up losing money, and quickly. The actual number might be even higher. 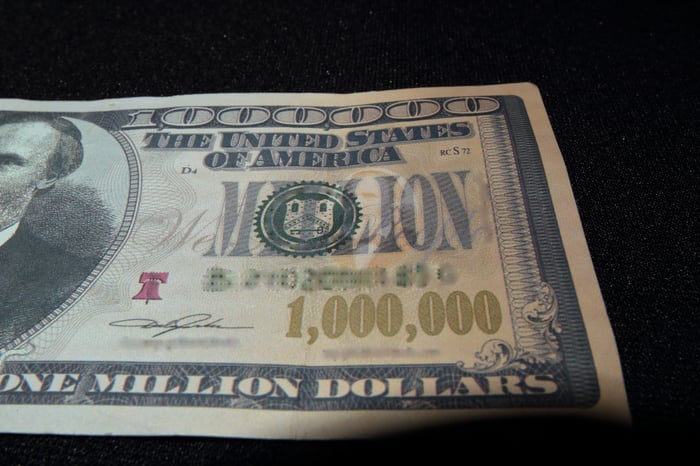 $1 million bills are all fake, but the financial security from being a millionaire is very real. Image source: Getty Images.

Granted, that's a relatively small subset of the world's investors. The buy-and-hold crowd knows that trying to capitalize on daily or even weekly volatility is a sucker's game, meant to enrich brokerage firms rather than their retail customers.

The thing is, it's not as if the professionals are faring much better with their longer-term stock-picking tactics. In its most recent review of the data, Standard & Poor's found that over the course of the past 20 years, roughly nine out of ten mutual funds focused on U.S. stocks underperformed the S&P 500 index.

International funds and small-cap funds fared slightly better, but only slightly. Granted, these folks aren't losing money. They're just not keeping pace with the market. You still would have been better served buying an international index or small-cap index fund, though.

And if you're thinking you'll just delegate your gains-making duties to hedge funds, think again. Despite the hype (often self-congratulatory) and occasional stroke of luck, as a whole they don't do significantly better than traditional mutual funds. You'd have to pick the right one at the right time, and cash out at the right time, too. That isn't easy.

Now embrace the bigger message: Picking stocks that consistently outperform the broad market is just hard to do.

Coming up with answer requires making some assumptions, but none of our assumptions are out of line or out of the ordinary.

For our hypothetical scenario, let's assume a 25-year-old investor intends to work for 40 years, retiring at 65. Let's also assume this individual socks away $500 per month (ideally in a tax-deferred retirement account) every month in that 40-year career. Sure, this might be tough at first, but as this person ages, pay raises make this monthly contribution easier. Lastly, let's assume the S&P 500 continues driving an average gain of around 10% per year, knowing that some years will be better than others. Given these parameters, even starting without any up-front capital, this individual should end this 40-year time span with around $2 million.

In the first of these two scenarios, using the same parameters as above except for the number of years that you contribute $500 a month, you'll still end that 30-year span with nearly $600,000.

In the second scenario, you'll wind up with roughly $1 million contributing $250 a month for 40 years.

Or, if you only wanted to work for 30 years and could only contribute $250 per month to the effort, you'd still end that three-decade stretch with around $300,000. Not too shabby. Most people will start their retirement with much, much less.

Doing the simple can be difficult

Some are surprised to learn they can become millionaires even with average incomes and small contributions, but they just need to clear the mental hurdle that prevents a lot of people from even trying in the first place. Perhaps even more surprising is that it can be done with the simplest and most accessible of investing instruments: S&P 500-based funds.

That said, don't confuse simple with easy. It's simple to regularly buy into an index fund or exchange-traded fund. It's challenging, however, to do so faithfully when money gets tight or it feels like stocks might never recover from a bear market. That's when discipline and consistency matter the most.

Oh, and even if you don't take the index-fund route and opt to pick your own stocks to grow your wealth, that's OK, too. Even if the 25-year-old discussed above only earns an average of 8% per year by trading individual stocks, that 40-year stretch will result in a nest egg worth about $1 million. Doing something is still better than nothing!