A customer favorite returned to the public markets on Thursday.

The bull market in stocks has prompted many companies to ponder initial public offerings. Plenty of those companies have never before had their shares listed on stock exchanges, but as investors were reminded on Thursday, the list of recent IPOs also includes companies that used to be publicly traded but had gone private before deciding to return to exchanges.

One of the more interesting IPOs the market has seen lately happened on Thursday. Despite some fears that the reception for this restaurant giant might not be as warm as its baked goods, in the end, things worked out pretty well. Below, we'll talk more about what happened to this IPO stock and what it means for the future.

How stocks fared on Thursday

Krispy Kreme is back!

The Krispy Kreme IPO process involved an above-average amount of drama. The doughnut maker had initially hoped to price its offering between $21 and $24. But the company's underwriters weren't able to drum up enough investor interest in that range. As a result, Krispy Kreme ended up cutting the IPO price to $17 per share, selling a bit over 29 million shares to raise roughly $500 million in the offering. 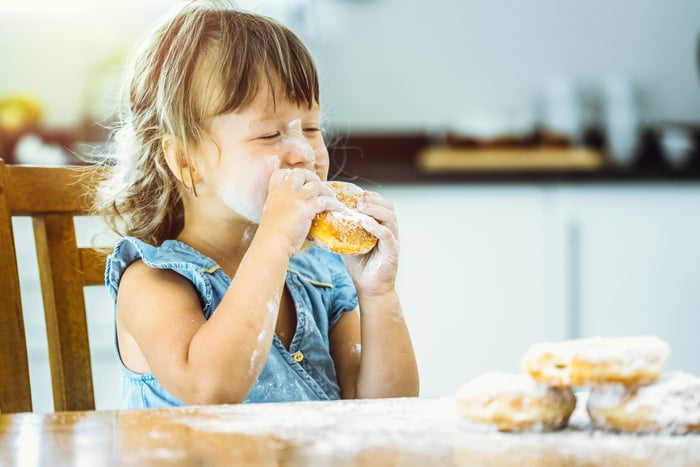 The start of public trading was even more difficult for Krispy Kreme. The stock didn't trade until nearly 1 p.m. EDT, and its opening price of $16.30 was below the IPO price. But it didn't take long for some excitement to build about the restaurant chain, and the stock pushed above the $17 mark just minutes after it began to trade on its way to a solid first-day result.

A nice win for private equity

When companies that went private return to the markets through an IPO, the first question investors should ask is how the private equity buyer fared. Europe's JAB Holding purchased Krispy Kreme back in 2016 for $1.35 billion, and even the somewhat disappointing IPO price valued the company at around $2.8 billion -- double what JAB paid for it.

To be clear, though, JAB hasn't come close to exiting its position in Krispy Kreme entirely. The IPO involved only a relatively small percentage of Krispy Kreme's outstanding shares. JAB will retain roughly three-quarters to four-fifths of the company's total stock.

It'll be interesting to see how Krispy Kreme fares in the days and weeks to come. The doughnut maker saw its stock soar in the years following its 2000 offering, only to give up much of those gains as hype surrounding its doughnuts started to fade. Investors looking for a sweet deal will have to look forward to hearing Krispy Kreme's first quarterly report on how its business is performing.

Even a Falling Nasdaq Couldn't Stop These 2 Stocks Tuesday