Please ensure Javascript is enabled for purposes of website accessibility
Log In Help Join The Motley Fool
Free Article Join Over 1 Million Premium Members And Get More In-Depth Stock Guidance and Research
By Dan Caplinger - Updated Jul 7, 2021 at 11:57AM

Wednesday was another turbulent day on Wall Street.

Summer is often a positive time for the stock market, but that's not proving to be the case this week. Wednesday morning brought continued volatility on Wall Street, as investors are trying to work through whether recent inflationary indications will reverse themselves just as quickly as they emerged. As of 11:30 a.m. EDT today, the Dow Jones Industrial Average (^DJI 1.27%) was up 67 points to 34,644. The S&P 500 (^GSPC 1.73%) had moved higher by 5 points to 4,348, but the Nasdaq Composite (^IXIC 2.09%) had fallen 46 points to 14,617.

Many investors look to the Dow as an indicator of the health of the broader stock market. In that context, declines from Boeing (BA 1.26%) and Goldman Sachs (GS 0.61%) stood out in holding back the average from bigger gains. Below, we'll look more closely at what's hurting these companies and whether this could be the beginning of a larger pullback.

Shares of Boeing were down nearly 2% on Wednesday morning. The aerospace giant continues to deal with uncertainty related to the pace of the reopening of the global economy and progress against the pandemic around the world. 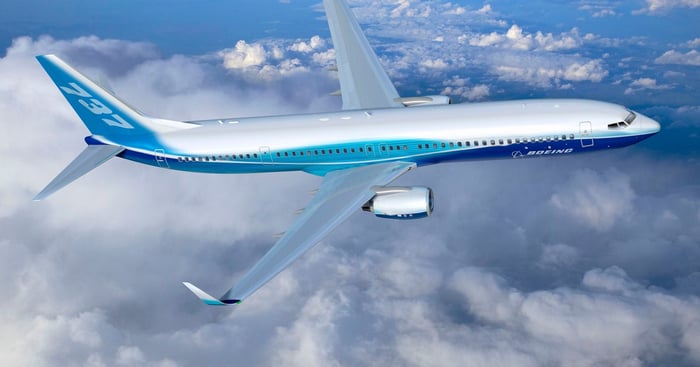 Major international airlines were all broadly lower on Wednesday, with Delta Air Lines (DAL 1.59%), American Airlines Group (AAL 1.73%), and United Airlines Holdings (UAL 1.73%) off between 2% and 3% on the day. Domestically, air travel has rebounded nicely, with traffic through TSA checkpoints topping their 2019 level earlier this month for the first time since the pandemic began.

Yet airlines are still waiting for international routes to return to full capacity, and that could potentially weigh on order activity for Boeing. Industry leaders foresee that travel between the U.S. and the U.K. could reopen in just weeks, and there's also optimism that Canada could reopen its border to vaccinated U.S. residents sooner rather than later.

A lot depends on the speed of vaccine rollouts both in the U.S. and overseas, as well as the potential impact of the Delta variant and other COVID-19 variants. If existing vaccines prove ineffective against future variants, then air travel could be right back at square one -- and that could prove extremely problematic for Boeing and its expectations of a return to normal in the near future.

Elsewhere, shares of Goldman Sachs were down almost 1%. That's not a lot, but given Goldman's high share price and the fact that the Dow is a price-weighted index, the investment bank's decline had a relatively significant downward influence on the Dow overall.

Until last month, Goldman had had an extraordinary year in 2021. Prospects for higher interest rates given the recovering economy were a big positive for the banking industry, especially with the prospects for boosting net interest income by passing through interest rate increases to loan and credit card customers. Goldman isn't the biggest bank on the retail side, but it has worked to make a bigger impression in the space through its Marcus unit.

It's true that Goldman can rely on its leadership position in mergers and acquisitions, initial public offerings, and trading for its own account to generate reliable cash flow and profits. But shareholders are increasingly looking at the retail side of Goldman's business for future growth prospects. Accordingly, when Treasury rates fall to their lowest levels in six months, it weighs on the stock's potential.

Goldman will be a long-term winner, but it's vulnerable to short-term macroeconomic impacts. As long as interest rates go lower, Goldman is likely to have a tough time returning to its all-time highs.