Please ensure Javascript is enabled for purposes of website accessibility
Log In Help Join The Motley Fool
Free Article Join Over 1 Million Premium Members And Get More In-Depth Stock Guidance and Research
By Dan Caplinger - Jul 13, 2021 at 10:19AM

The stock market took a brief hit on a big price rise in June.

The first set of earnings reports from bank stocks came out on Tuesday morning, and investors didn't have a huge reaction to any of what they heard. Nevertheless, it's a reasonable question to ask whether major financial stocks like Goldman Sachs (GS 0.61%) and JPMorgan Chase (JPM 1.66%) can help investors fight against building inflationary pressures and generate gains. If the bull market is to continue, it'll need support from financials and other areas of the market that haven't played as large a leadership role over the past year. 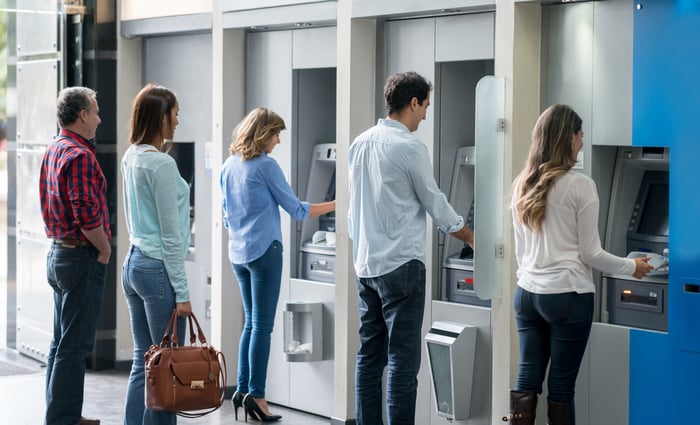 Goldman Sachs shares were down almost 2% on Tuesday morning. The investment-banking giant reported solid second-quarter financial results, but investors didn't see enough to justify further stock-price gains after a significant advance over the past week.

Net revenue at Goldman was up 16% year over year, with gains concentrated in the company's investment banking, asset management, and consumer and wealth-management segments. Only the global-markets segment showed weaker results, having followed an especially strong period for the fixed income, currency, and commodities arena in the second quarter of 2020. Assets under supervision climbed above the $2.3 trillion mark.

Net income rocketed higher for Goldman Sachs. Earnings of $15.02 per share compared with just $0.53 per share a year ago, and the figure crushed the $10.23 per share consensus forecast among those following the stock.

Goldman shared its success with shareholders by boosting its quarterly dividend by 60%, setting the new payout at $2 per share. Even with that generous move, the increase will only take Goldman's dividend yield up to about 2.1%.

Meanwhile, shares of JPMorgan Chase saw similar declines of between 1.5% and 2%. The bank's second-quarter report included plenty of good news, but again, the disconnect between higher inflation and lower yields on Treasuries weighed on investor sentiment.

JPMorgan's headline numbers were mixed. The bank's managed-revenue figure was down $2.4 billion from year-ago levels, coming in at $31.4 billion. However, net income jumped more than 60% to $11.9 billion, and that produced earnings of $3.78 per share. That number was well ahead of the $2.40 per share JPMorgan earned in the second quarter of 2020 and dramatically exceeded expectations among those following the stock.

JPMorgan's bottom line benefited from a $3 billion release of loan-loss reserves. Revenue from consumer and community banking held up well, as did commercial banking and asset and wealth management. However, a sizable slowdown in activity in JPMorgan's corporate and investment banking unit weighed on results.

High expectations for bank stocks could explain the drop in their stocks Tuesday morning despite solid results. Yet the bigger worry seems to be that the yield curve isn't reflecting any response to rising inflation, and that could weigh on the ability of Goldman, JPMorgan, and others to boost net interest income to produce long-awaited profit growth.

Unless conditions in the bond market change, it'll prove difficult for bank stocks to help investors fight against inflation.