Please ensure Javascript is enabled for purposes of website accessibility
Log In Help Join The Motley Fool
Free Article Join Over 1 Million Premium Members And Get More In-Depth Stock Guidance and Research
By Howard Smith - Jul 13, 2021 at 9:33AM

Volatility in the electric vehicle stock carried into 2021 from last year.

Shares of electric vehicle (EV) start-up Nikola (NKLA 2.09%) had a roller coaster year in 2020, and have only settled down somewhat in the first half of 2021. Through June 30, shares of Nikola were up 18.3% for the year, according to data provided by S&P Global Market Intelligence. But to get to that point, shareholders endured a 65% drop along the way.

That drop coincided with a rotation away from growth and speculative stocks over the first few months of the year. It also reflected a lack of confidence in Nikola that carried over from last year when questions arose around the validity of the company's plans and progress. But over the most recent several months, the company has updated investors with progress on its first batch of Tre battery-electric trucks, plans to develop hydrogen fueling infrastructure, and a letter of intent to purchase its trucks from a California port trucking company. 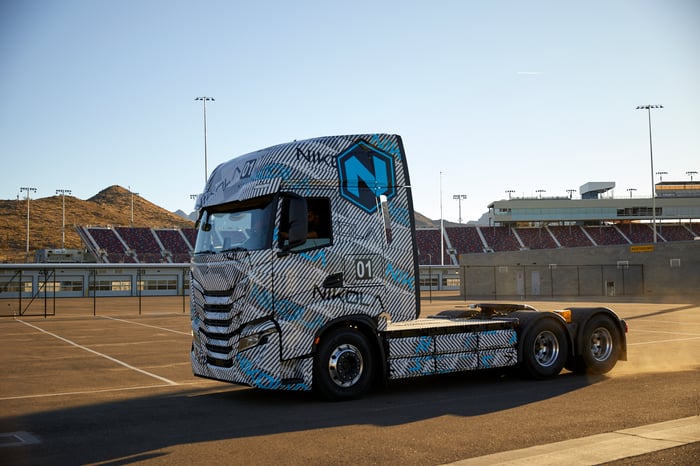 As construction progresses on Nikola's manufacturing facility in Arizona, its first two batches of trucks were produced at a partner's plant in Germany. Those Tre battery-electric trucks were shipped to the U.S. for testing and commissioning activities. The company said in its first-quarter financial update that it expected technicians in Germany to shift to Arizona by the end of June to begin building battery-electric as well as hydrogen fuel cell electric trucks there. Investors should get a new update during Nikola's second-quarter financial report planned for Aug. 3.

Along with progress on manufacturing its first trucks, Nikola has also announced a collaboration with TravelCenters of America (TA -0.07%) with initial plans to build hydrogen fueling stations at two of the companies existing travel centers for heavy truck traffic. Nikola also has announced a signed letter of intent from a Southern California port trucking company to purchase 100 of both its battery and fuel cell trucks.

Most recently in June, Nikola said it is investing $50 million in Wabash Valley Resources, a clean hydrogen project under development in the Midwest. Nikola will hold a 20% equity interest in the project. Once completed, the facility will produce hydrogen for transportation fuel, and will generate electricity using solid waste byproducts from oil refining and biomass fuel. Nikola said it will use the hydrogen fuel to support commercial trucking for its hydrogen fuel cell vehicles in the area.

All told, incremental progress by the company has investors anticipating some of the potential they saw when the stock spiked to much higher levels last year and in early 2021. The 18% gain in the first half of 2021 has the company valued at about $3.8 billion. That still reflects a lot of speculation to justify its market cap once it begins actually bringing in revenue.