After starting the year at a sizzling pace, bank stocks have cooled off recently. Since the KBW Nasdaq Bank Index peaked June 1 -- up 38% since the end of 2020 -- it's fallen roughly 10%.

It's not exactly banks' fault. They've been reporting much-improved earnings this year, led by strong credit quality and large releases of capital previously set aside for potential loan losses back into earnings. While loan growth has not materialized yet, spending levels have rebounded and outpaced 2019 levels.

One main culprit behind the slowdown has been the inexplicable plunge of the yield on the 10-year Treasury note, which has been causing havoc in the broader markets as well. Here's why bank stocks are going to need some help from the 10-year note if they want to continue their first-half success in the second half of the year. 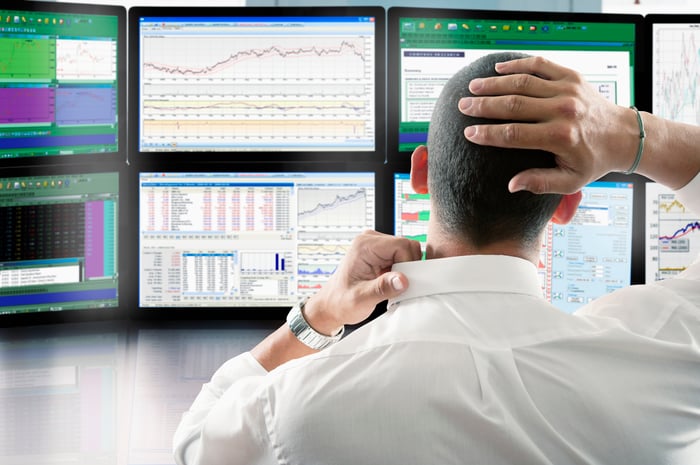 The 10-year's effect on bank stocks

The 10-year Treasury note is a bond issued by the U.S. government that matures in 10 years. By investing in it, you are essentially lending the government money and getting paid back with interest. Because Treasury bills are backed by the government, they are considered incredibly safe, and the interest paid on them is minimal, with longer-term Treasury notes paying out higher rates than shorter-term notes.

The 10-year Treasury yield is a very important economic indicator. That's partly because it's influenced by market sentiment and beliefs about the direction of the economy, but also because it serves as a proxy for mortgage rates and heavily influences which direction bank stocks will move in. While shorter-term rates like the federal funds rate are controlled by the Federal Reserve and are less sensitive, the 10-year yield can move higher on its own when the market is expecting improved economic growth, inflation, or future rate hikes by the Fed. 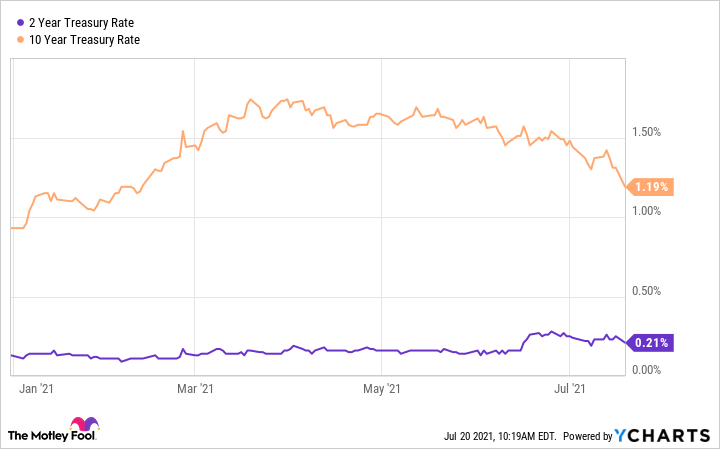 As you can see in the chart above, the yield curve steepened earlier this year as the two-year yield stayed put, while the 10-year yield rose to a high of roughly 1.75% at one point. During this time, bank stocks flourished. This makes sense if you think about it, because when the 10-year yield is higher, new mortgage loans get originated with higher interest rates. Other longer-term yields -- like that of the five-year Treasury note, a benchmark for a lot of commercial lending -- also can move up with the 10-year yield, affecting other loan interest rates. And banks invest directly in 10-year Treasury bills with excess liquidity, so they will also see higher profits in their securities folders when the 10-year yield is higher.

The 10-year is confusing markets

But obviously, the 10-year Treasury yield has retreated and recently was around 1.23%, erasing a lot of progress that had been made earlier this year and likely resulting in some of the slowdown in bank stocks.

The decline in the 10-year Treasury yield does not make a whole lot of sense right now and has baffled markets for the most part. Treasury yields are influenced by several factors or expectations, including the current state of the economy, demand for lower-risk returns, supply and demand of Treasury bills, monetary policy, and inflation expectations. While there are a lot of factors, the 10-year yield has gone lower even as inflation ramps up. While some, like the Fed, have argued that inflation could be transitory, the consumer price index jumped 0.9% in June from May and is up 5.4% year over year. That's the biggest surge since 2008. Consumer prices are a big indicator of inflation, and inflation usually leads to rate hikes. Anticipated rate hikes should push the 10-year yield up, not down.

All of this should support a rising 10-year Treasury yield. But the declining 10-year yield could indicate the belief by the market that economic growth will stall or come up short of expectations.

Needing help from the 10-year yield

Banks are going to need the 10-year yield to reverse course and start heading north again if they want the interest they make on loans and securities to move higher and help profits. Earlier this year, many experts and economists expected the 10-year yield to hit 2% by the end of 2021. There's a long way to go if that's going to happen. I believe that the 10-year Treasury is at or near its bottom and should soon start going up again, but given the unpredictability since the start of the pandemic, it's really hard to rule anything out. If the 10-year yield starts to reverse course and there is some loan growth in the back half of the year, bank stocks should have a nice finish to what has still been a strong year so far.