Chinese stocks got slammed in today's trading session. The country's government confirmed that it would be implementing stricter regulations for private tutoring companies, and the news prompted steep sell-offs for a wide range of technology-adjacent stocks. 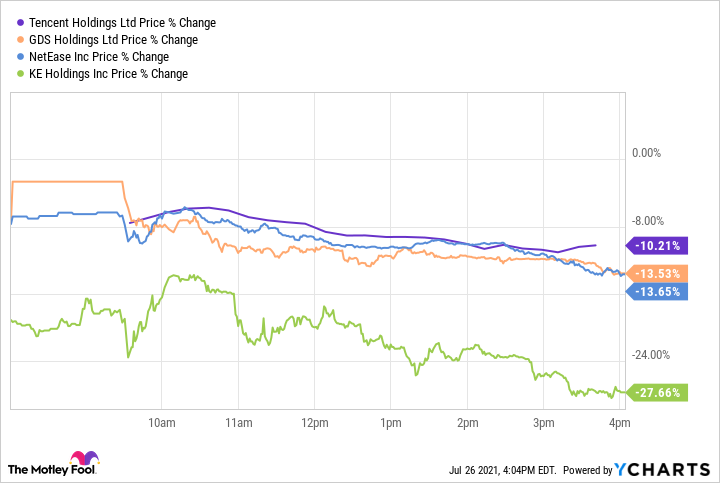 While the big regulatory news centered around China's after-school tutoring space, the market read much deeper into the industry-specific development, and investors sold out of stocks without any immediate exposure to tutoring. It will take some time to assess the implications of regulatory shifts for the multitude of individual companies, but the general concerns do not appear to be unwarranted.

It's been a challenging month for investors with significant exposure to Chinese stocks. The latest round of sell-offs and news that the country will impose tighter standards on for-profit tutoring companies exist in the context of broader crackdowns on publicly-traded companies. The Chinese government has raised concerns that publicly-traded companies listed on U.S.-based exchanges may be forced to share sensitive information, and the scope of companies effected by new regulatory standards will likely continue to expand.

Many Chinese companies trade at substantial discounts relative to what comparable U.S.-based businesses are valued at, but that doesn't necessarily mean that investors should go on a shopping spree. While I approached the recent sell-off as an opportunity to add to positions in some Chinese companies in my portfolio, it's also clear that the regulatory issues present risks that make it much more difficult to chart future performance. China's fast-growing economy and population of more than 1.4 billion people make it an attractive growth market, but investors should approach Chinese stocks with the understanding that political and regulatory developments could play an outsize role in shaping performance.