It wasn't long ago that the U.S. government appeared to be butting heads with top COVID-19 vaccine makers over the need for booster doses. On July 8, the Centers for Disease Control & Prevention (CDC) and the U.S. Food and Drug Administration (FDA) issued a joint statement about booster doses. That statement seemed to slap down Pfizer (NYSE:PFE) and Moderna (NASDAQ:MRNA), both of which had publicly voiced views that booster shots would probably be needed.

Neither the CDC nor the FDA has changed their official stances on booster doses. But now, it looks like Pfizer and Moderna might have been right all along. Here are three big hints that COVID vaccine booster doses are on the way -- at least for some people. 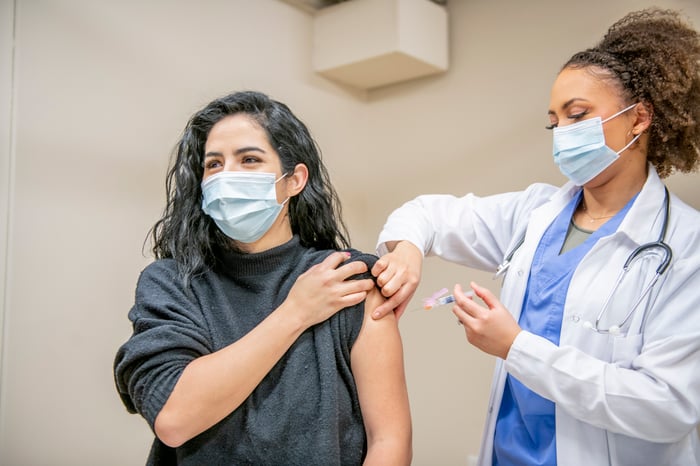 Dr. Anthony Fauci is well known to most Americans by now. He's director of the U.S. National Institute of Allergy and Infectious Diseases and serves as the chief medical advisor to President Biden.

On Sunday, Fauci stated in an interview with CNN that a third COVID-19 booster dose "might likely happen." He indicated that immunocompromised individuals would be most likely to receive a booster.

Fauci doesn't make the decision about boosters himself. However, he's heavily involved with the ongoing discussions about matters related to the COVID-19 pandemic. It's a pretty good bet that his view reflects a growing consensus among federal healthcare experts.

Last week, the CDC's Advisory Committee on Immunization Practices (ACIP) met to discuss booster doses. The committee didn't make an official recommendation to the CDC. However, its members seemed to be largely supportive of allowing immunocompromised individuals to receive a third booster dose if recommended by their doctors.

Israel was the first to begin giving third booster doses of the Pfizer-BioNTech vaccine to some immunocompromised individuals earlier this month. The country is also now evaluating the possibility of giving a third shot to individuals over age 60 in hopes of preventing another wave of lockdowns.

France quickly followed suit. On July 12, President Emmanuel Macron announced that booster doses would be administered to older individuals and immunocompromised individuals as well as hospital staff over age 50 who work with patients most vulnerable to COVID-19.

The U.S. doesn't have to follow in the footsteps of what other countries do in their fight against COVID-19. However, there's no question that federal healthcare officials here pay attention to what other nations are doing.

Last week, Pfizer and BioNTech announced that the U.S. government was purchasing another 200 million doses of their COVID-19 vaccine. Why could this be a hint that booster doses are on the way? Follow the numbers.

Prior to this latest deal, the U.S. had already secured supply deals with Pfizer-BioNTech, Moderna, and Johnson & Johnson for enough doses to fully vaccinate 600 million individuals. The entire U.S. population, including children, totals around 333 million.

Why would Uncle Sam need even more doses of the Pfizer-BioNTech vaccine? The most likely reason: booster doses.

What it could mean for vaccine stocks

Vaccine stocks obviously benefit when more doses are sold. However, don't necessarily expect the shares of Pfizer, Moderna, or any of the other leading vaccine makers to skyrocket if the U.S. officially decides to give third booster shots.

For one thing, it's most likely that the booster doses would only be authorized (at least initially) for immunocompromised individuals. More importantly, though, as we've already seen, the U.S. already has enough vaccine doses ordered that it probably won't need too many more -- at least not in the near future.