A clinical-trial flop for Annovis Bio is reminding investors that developing new drugs for Alzheimer's disease is an extremely risky business.

Shares of Annovis Bio (ANVS -2.40%) are getting hammered in response to disappointing data for the company's Alzheimer's disease candidate. The biotech stock was down 59.4% at 2:45 p.m. EDT.

Annovis Bio's losses have spread to other clinical-stage biotech companies with Alzheimer's disease programs of their own. Shares of Anavex Life Sciences (AVXL -7.80%) and Cassava Sciences (SAVA -2.09%) were down 14.3% and 20.3%, respectively.

Leading up to yesterday's presentation at the Alzheimer's Association International Conference (AAIC), Annovis Bio tried to convince investors its new drug candidate for Alzheimer's disease and Parkinson's disease could be more effective at improving cognition than Aduhelm from Biogen. Annovis Bio stock imploded today because data from 14 Alzheimer's disease patients wasn't nearly sufficient to make such a claim. 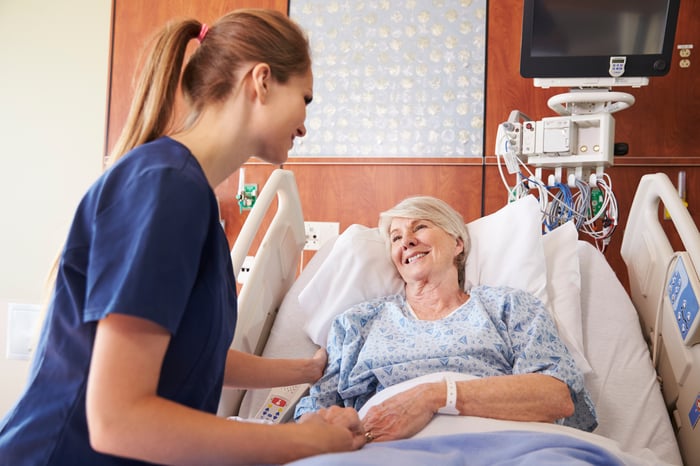 After 25 days of treatment, cognition scores, as measured by the ADAS-Cog11 test, improved by 30%, compared to these patients' baseline scores. As is often the case in neuroscience studies, the placebo group also improved. This resulted in a difference between patients who received Phosiphen and the placebo group that wasn't statistically significant.

Cognitive abilities, as measured by the mini-mental state examination (MMSE) after 25 days, were more discouraging. Parkinson's disease patients treated with Posiphen showed no improvement, while the placebo group improved slightly. Both groups of Alzheimer's disease patients showed some improvement on the MMSE, but the placebo group improved slightly more than those given Posiphen.

Alzheimer's disease and Parkinson's disease progress too slowly to expect measurable cognitive improvements in just 25 days, but that didn't stop Annovis from trying. Today's flop was a harsh reminder that Anavex Life Sciences has been testing its lead candidate, blarcamesine, in different forms of dementia for over a decade, and the company still hasn't shown evidence that it significantly reduces cognitive decline for Alzheimer's disease patients, compared to a placebo.

In June, Cassava Sciences told investors its lead candidate simufilam improved ADAS-Cog11 scores by just 18%, compared to baseline after nine months of treatment. Since this was an open-label study, we can't say it wouldn't have been significantly better than a placebo group.

Annovis Bio's results today probably wouldn't have caught any investors off guard if they had done some homework. The company in-licensed Posiphen all the way back in 2008, so it's already had plenty of time to shine in an early-stage dementia study.

As you can imagine, Annovis Bio isn't throwing in the towel on Posiphen just yet. The company has finished treating 40 Parkinson's disease patients and should be ready to share the results in about two months. Given Posiphen's lack of success so far, its outlook is downright lousy.

When it comes to biotechnology investing, it's important to understand that companies rarely just come out and say something isn't going well. The appearance of foot dragging doesn't necessarily mean a drug is doomed to fail. With failure rates in this industry so high, though, biotechs that appear to be dragging their feet aren't worth the risk.