Please ensure Javascript is enabled for purposes of website accessibility
Log In Help Join The Motley Fool
Free Article Join Over 1 Million Premium Members And Get More In-Depth Stock Guidance and Research
By Jim Halley – Jul 30, 2021 at 7:21AM

For-profit hospital companies are seeing earnings spring back to life this year after getting hit hard by the COVID-19 pandemic.

All of these companies are benefiting from significant tailwinds. Medical procedures that were deferred last year due to the coronavirus pandemic are picking up, along with general patient admissions. On top of that, the U.S. Census Bureau's revised 2020 numbers show that the percentage of the U.S. population 65 and older grew by 34.2% over the past decade, and as that group ages, more medical procedures are likely to follow.

All three companies' management teams have revised annual earnings upward this year, and though their shares have climbed in 2021, all of them still have a trailing-12-month price-to-earnings ratio of less than 20. That's well below the industry average of 44.61, making these three businesses potential bargains. 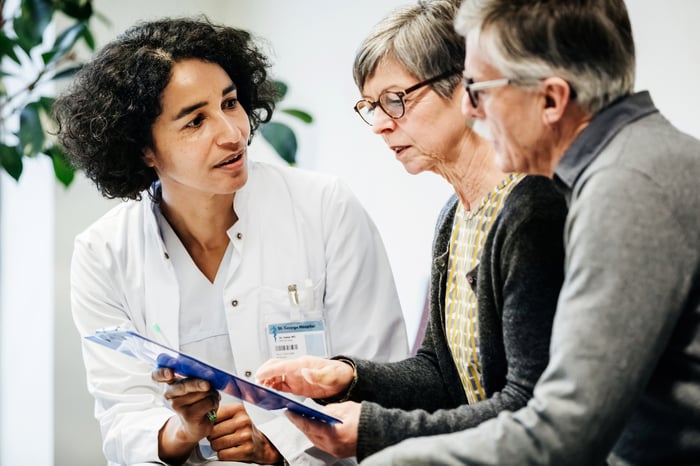 HCA Healthcare is in great shape

HCA Healthcare's shares are up more than 49% this year, but even at its current price, the stock is only trading for about 17 times earnings. The company is the largest non-government operator of acute care hospitals in the U.S., and it has grown revenue every year for more than a decade.

Through the first six months of 2021, HCA reported $28.4 billion in revenue, up 18.7% year over year, and net income of $3.2 billion, up 69% over the same period in 2020. Second-quarter numbers show growth to be accelerating, with reported revenue of $14.44 billion marking a 30.4% rise year over year. Net income was $1.45 billion, compared with $1.08 billion in the same period in 2020. Adjusted EBITDA for the quarter came in at $3.22 billion, an improvement on the $2.67 billion the company reported a year ago; the latter number included $822 million in stimulus money from the government that has since been paid back.

The biggest growth came from an uptick in same-facility outpatient surgeries, which are often elective procedures. They were up 52.5% year over year. The best news is, admissions were up 2.7% even compared with 2019. In the second-quarter report, management revised their 2021 guidance upward, calling for revenue between $57 billion and $58 billion, adjusted EBITDA between $12.1 billion and $12.5 billion, and earnings per diluted share between $16.30 and $17.10.

Universal Health Services is firing on all cylinders

Universal Health Services owns more than 400 hospital facilities, including acute care hospitals, outpatient facilities, and ambulatory care hospitals, but it's mostly focused on its 334 behavioral health facilities. The pandemic hit that business hard because it led to a decline in referrals to Universal facilities from schools, many of which were closed, and from emergency rooms, which saw a drop in non-COVID traffic.

Through six months, the company reported revenue of $6.2 billion, up from $5.6 billion in the same period last year. It also reported net income of $534.3 million, up from $400.9 million year over year. Diluted earnings per share came in at $6.31, a big difference from the $4.60 reported the year before.

Steve Filton, the company's chief financial officer, said in Universal Health Services' second-quarter earnings call that the company saw a big decline in COVID-related patients in the second quarter, with a corresponding increase in non-COVID patients. He said that sent the company's metrics (patient days, emergency room visits, and surgical cases) back to pre-pandemic levels. He added that while the company did see an uptick in COVID-19 patients in June due to the delta variant, the number of elective surgeries hasn't fallen. 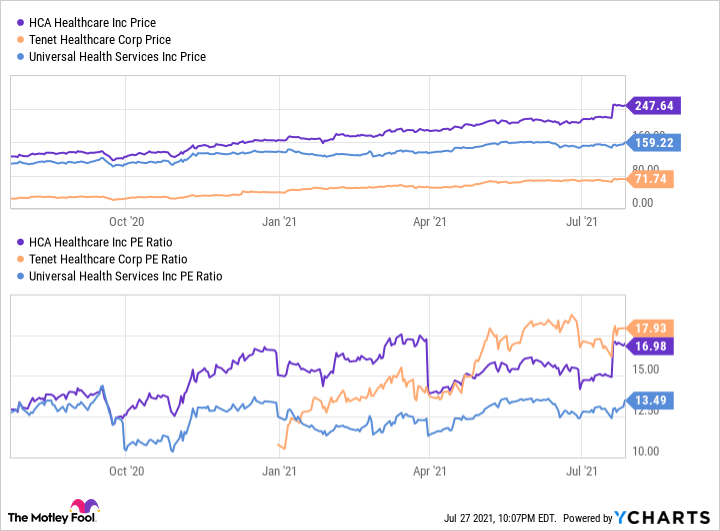 Tenet's shares are up more than 79% for the year, but the stock is still selling for only 17 times earnings, thanks to a strong first half. Through six months, the company posted net income of $216 million, up from $182 million year over year, and it reported revenue of $8 billion, compared with $6.9 billion in the same period in 2020.

The driving force behind all that growth was a 70.6% increase in outpatient visits to Tenet facilities and a 68.2% rise in surgical cases undertaken by United Surgical Partners International, a Tenet subsidiary. Management increased their full-year outlook for net income per diluted share to between $6.25 and $7.17, up from an earlier estimate of $2.98 to $4.69.

One shadow over all three stocks is the concern about rising infection numbers from the COVID-19 delta variant.

However, at this point, it appears that while there's been an uptick in cases, the number of ICU hospitalizations from the variant is relatively low compared with the COVID numbers at this time last year.

Of these three, I'm most excited in the near term about Universal Health Services. While all three stocks have bullish outlooks for the rest of the year, Universal's shares haven't climbed as fast as Tenet's and HCA's, and that provides more opportunity for growth. Looking more long-term, however, HCA Healthcare gets the edge because its vast size gives it more diversification and pricing power. The company managed to grow revenue even when others didn't last year.