Please ensure Javascript is enabled for purposes of website accessibility
Log In Help Join The Motley Fool
Free Article Join Over 1 Million Premium Members And Get More In-Depth Stock Guidance and Research
By Demitri Kalogeropoulos – Aug 3, 2021 at 10:30AM

Investors sold off Boston Beer's (SAM 0.89%) stock last week after the company dramatically lowered its outlook for the fiscal year. Rather than boom over the early summer months, the hard seltzer beverage niche slowed. The Truly brand faced new competition, too, slowing its momentum as the second-best-selling franchise in the industry behind White Claw.

In a conference call with Wall Street analysts, Boston Beer's management team sounded confident about the business despite the disappointing Q2 results. But it warned that the short-term growth picture is unusually cloudy right now. 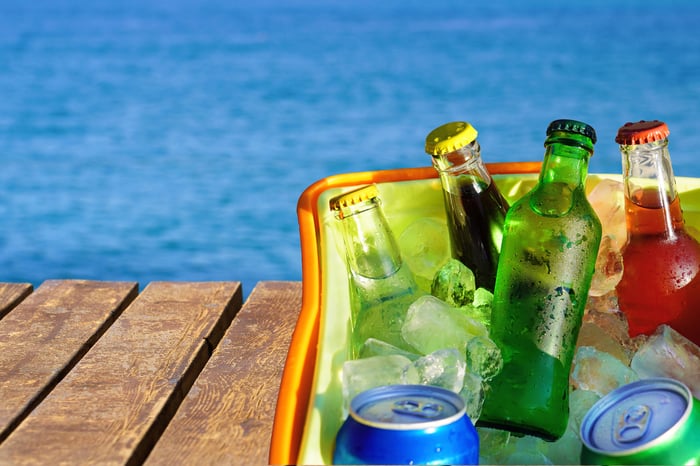 Analysts' questions focused on how management could have whiffed so badly in its estimate of demand for the Truly hard seltzer brand. The company in April predicted soaring sales volumes for the franchise even on top of last year's surge. Instead, growth rates fell to about half of what Boston Beer saw in fiscal Q1.

Truly is still winning market share, meaning management's growth initiatives are working. But the category is running out of new customers to convert.

Boston Beer didn't blame any individual competitor for slowing its momentum. Constellation Brands (NYSE: STZ) is gaining ground with its Corona hard seltzer, but that boost wasn't a major factor behind the Q2 slump.

Instead, it's the cumulative effect of hundreds of new entrants into the category that's hurting Truly. Over 200 hard seltzer brands are available today, up about 50% since last year. There's not much to differentiate most of the products, either. As a result, consumers aren't valuing innovation from leaders like Boston Beer and Constellation Brands as much as they had been. The luster "for some consumers has been lost," Burwick said.

The main reason for Boston Beer's widening outlook is that the hard seltzer niche is at an inflection point. The negative factors described above might contribute to a jarring slowdown, or a softer landing, which won't be clear for a few months. That's why the company predicts sales gains of between 25% and 40%, compared to the 33% increase it has notched over the past six months.

The good news is that these metrics all imply significant market share gains for Truly even though sales and profit growth will be weaker than executives predicted three months ago. The brand grew at roughly double the industry's expansion pace this past quarter, after all, even with the flood of new competition. The stock might underperform anyway this year since Boston Beer's huge 2020 rally hadn't factored in a quick end to the hard seltzer boom.

The company still has one of the best portfolios in the industry, along with a great track record for innovation, which in recent years has spanned craft beers, hard teas and ciders, and hard seltzers. But Wall Street might stay in "show-me" mode with Boston Beer's stock while management works to reestablish faith in its short-term operating forecasts.