These financial powerhouses are taking full advantage of the surging desire among companies to combine and scale up.

Mergers and acquisitions activity has been hot in 2021. According to data from Refinitiv, as reported by Forbes, M&A deals in the first six months of the year totaled $2.82 trillion, a 132% increase from the same period in 2020. 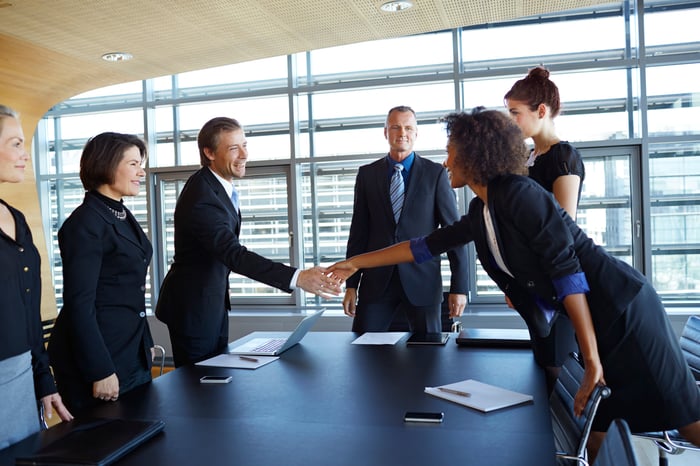 M&A deals are happening at a record pace

According to Refinitiv, global M&A activity in terms of the number of deals also reached a record level in the first half -- 28,175 globally, a 27% year-over-year increase. The even greater rise in their total value has been driven by megadeals -- transactions with values of $5 billion or more. According to PwC, there were 54 megadeals through June 1, equaling the number of megadeals closed during all of 2020.

Analysts say that this unusually high M&A activity can be attributed to a few factors. For one, regulators and central banks have been supporting markets. The Fed's ongoing loose monetary policy that is keeping benchmark interest rates near zero is providing businesses with ultra-low borrowing costs.

Not only that, but private equity firms have for years been sitting on "dry powder" -- cash reserves that they are finally deploying. And even in the wake of the first half's frenzy, those private equity firms were still sitting on nearly $3.3 trillion in dry powder as of June 30. In addition, a shift in consumer preferences has companies looking for ways to digitize their business. And finally, the high level of M&A activity can also be attributed to a changing regulatory landscape. Many companies are looking to make deals prior to the year's end before any changes in capital gains taxes go into effect.

Profiting from the M&A boost

Moelis & Co. is another investment bank that posted stellar results in Q2 -- its top line grew by 126% to $361 million for its second-highest quarterly revenue ever. In the first half of the year, the firm posted revenue of $625 million, up 99% from the first half of last year.

Investors in any of those investment banks will want to pay close attention to a couple of factors that could slow down the deal-making. For one, a hike in benchmark interest rates, whether from the Federal Reserve or European Central Bank, would make financing conditions less favorable, which could lead to a pullback in deal activity.

A tightening of regulatory oversight could also have an impact. In recent months, the Biden administration has increased federal scrutiny on both megamergers and special purpose acquisition companies (SPACs). A megamerger between insurance giants Aon and Willis Tower Watson -- which would have created the world's largest insurance brokerage -- was called off after the Department of Justice sued to block the combination, calling it anticompetitive. The Securities and Exchange Commission has put SPACs on notice, too. SEC Chairman Gary Gensler has said that the agency is devoting significant resources to addressing emerging issues in SPACs. Deal activities involving these "blank check companies" slowed in the second quarter.

However, according to PwC, deal-making activity is still expected to remain elevated for the rest of the year. Goldman Sachs CEO David Solomon noted that the firm's backlog of deals is at a record level, and told investors, "we observed certain secular changes driving strategic activity as our key clients emerge from the pandemic -- the drive for scale, the push to achieve operating efficiency, the shift to a digital economy across a broader industry set."

Moelis & Co. CEO Ken Moelis said, "the pace of our new business activity remains high, and our pipeline is stronger than it has ever been," and also said that he has "never been more optimistic about our business." He went on to say that M&A has entered a secular growth phase as vast amounts of cash flow into private equity and other alternative investments.

M&A activity has been hot this year, and investors should expect investment banks to keep delivering stellar earnings in the coming quarters as they continue to crank out deals.