Technology is changing the way homes are bought and sold, and these two companies are dominating the online real estate industry.

A combination of years of extremely low interest rates and the federal government's pandemic-driven economic stimulus have helped heat the U.S. residential real estate market to a rolling boil.

It's estimated that the U.S. is more than five million homes short of meeting the demand of would-be home buyers, meaning many hopefuls are being priced out of the market.

Lucky for both buyers and sellers, real estate tech companies have in recent years made buying a house cheaper and more convenient. Zillow Group (ZG 0.71%) (Z 0.94%) now purchases homes directly from sellers, sparing them from an otherwise costly and time-consuming sales process. It has also developed tools to help people sell homes with or without traditional agents.

Digital real estate giant Redfin (RDFN 2.00%) recently boasted that it has saved consumers $1 billion in transaction fees to date. It has achieved this by building scale, hiring an army of in-house agents, and charging listing fees of just 1% to 1.5%, compared to the industry standard of 2.5% to 3%.

The case for Zillow Group

Zillow has succeeded in digitizing almost every aspect of the residential real estate market. It has nine core brands under its umbrella, each covering a different piece of the complex industry. 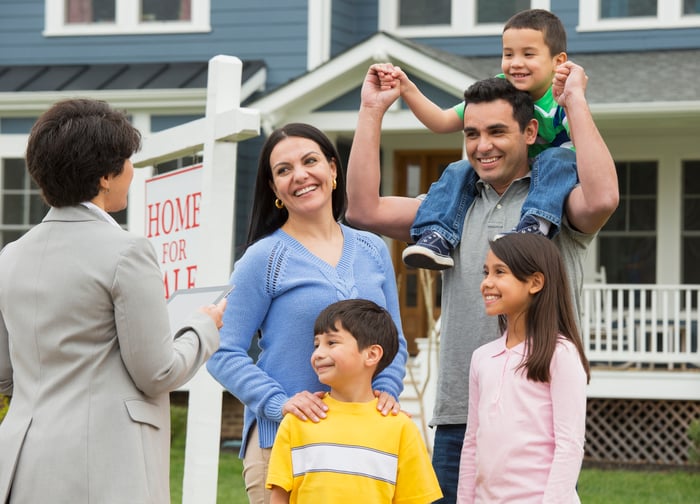 Direct buying is the largest contributor to the top line, making up about 59% of total revenue. When a homeowner is looking for a quick transaction without the hassle of a traditional sale -- which can often take months -- they can simply sell their house directly to Zillow. It's as easy as entering their address on the website and waiting one to three days for an offer. If the seller likes the price the company offers, Zillow makes an all-cash payment once the deal closes.

For sellers who prefer to go the traditional route, Zillow can connect them with a local real estate agent or help them sell their home online without one, meaning the seller would host their own open houses and save on commissions.

While overall revenue growth was incredibly strong, there's even greater underlying strength in specific segments. Premier Agent, which provides tools to real estate agents to help them expand their networks, grew 82% year over year. It accounted for over 26% of total revenues, and highlights Zillow's truly comprehensive solution -- which even captures business from independent operators.

Smaller segments like Zillow Closing Services (which provides title and escrow services) and Zillow Home Loans also grew robustly, up 1,073% and 68% respectively. While they make up just 4.7% of total revenue, they could be important sources of growth going forward.

Zillow is expected to deliver $1.04 in earnings per share for 2021, followed by 38% growth in 2022. At those rates, this stock is an attractive long-term opportunity.

The case for Redfin

Redfin offers sellers a direct-buying service like Zillow's, though it's significantly smaller in size. This company's focus is on the traditional real estate agent model, but with a twist -- enormous scale. Its goal is to run an operation large enough to allow it to sustain cheaper commissions for customers, and use that advantage to take an ever-larger share of the market. In the second quarter, Redfin represented the sellers in 1.18% of all existing home sales by value in the U.S., and more than 48 million people use its app each month on average. The company also completed its acquisition of RentPath in April, making it one of the top online destinations for renting as well as buying.

The company reports revenue in two categories -- services and products. The former covers its brokerage business, reflecting commissions from sales made by Redfin's employed real estate agents and its partner network. Revenue from that segment grew over 111% year over year during the quarter and made up 63% of the top line.

Product revenue is generated through the sale of homes that have been directly purchased by the company. It sold 292 properties in the second quarter at an average sale price of $570,930, and this segment managed to swing its gross margin -- which was negative in the prior-year period -- into positive territory, landing at 2.9%. As it sells more units and builds scale, this metric should improve further.

Analysts expect the company to deliver a loss of $0.69 per share this year, but improvement should come in 2022 as it creeps toward breaking even. With soaring demand for residential real estate and record prices, Redfin's growing share of existing home sales should supercharge its revenue for the rest of the year, and the company might even beat expectations.