Please ensure Javascript is enabled for purposes of website accessibility
Log In Help Join The Motley Fool
Free Article Join Over 1 Million Premium Members And Get More In-Depth Stock Guidance and Research
By Sushree Mohanty – Aug 10, 2021 at 9:59AM

This successful U.S. player is a strong competitor against its Canadian counterparts.

In 2020, Illinois-based multistate operator (MSO) Green Thumb Industries (GTBIF -0.30%) rode the ongoing cannabis boom to a successful and profitable year. This company is rapidly emerging as one of the top contenders in the U.S. marijuana industry, and even amidst a pandemic, it was able to continue expanding.

After a rocking 2020, Green Thumb's market cap is nudging up against that of one of the biggest Canadian players, Canopy Growth -- which boasts an investment from U.S. beverage giant Constellation Brands shoring up its balance sheet. Green Thumb now holds a market cap of $7.1 billion to Canopy's $7.5 billion. Note that Green Thumb is also profitable, while Canopy is not. So far this year, Green Thumb's stock is up 32%, compared to Canopy's fall of 22%. Meanwhile, the industry benchmark, the Horizons Marijuana Life Sciences ETF, has gained 20% over the same period.

After establishing a strong footing in its home state, Green Thumb is looking to spread its roots in some hot new cannabis markets. It is set to report the earnings from its second quarter (ended June 30) tomorrow, Aug. 11. Here's why investors may want to consider getting in now. 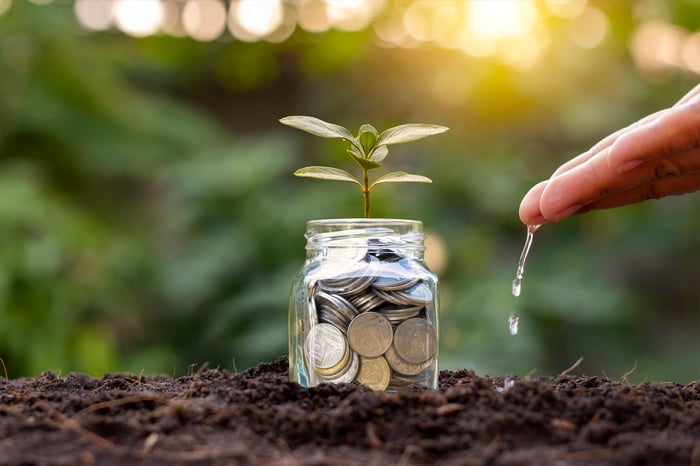 A strong start to 2021, and the full year could turn out even better

The Illinois market alone has already generated $753 million in recreational sales through July, and the state could easily surpass $1 billion in 2021 sales of recreational cannabis alone if this trend continues. Green Thumb operates nine dispensaries in Illinois.

For the first quarter, the company reported  positive earnings before interest, tax, depreciation, and amortization (EBITDA) and marked its third consecutive quarter of profits. Adjusted operating EBITDA climbed to $71 million from $25.5 million in the year-ago period, while net profits came in at $10 million compared with a net loss of $4.2 million in Q1 2020.

Green Thumb knows how to strike while the iron is hot. It recently entered the Virginia cannabis market by acquiring 100% of cannabis grower and producer Dharma Pharmaceuticals. Virginia made recreational cannabis legal in July, but retail sales won't begin until Jan. 1, 2024. This acquisition gave the company access to one of five vertical licenses in the state, which includes an operating production facility and a retail store.

The company is also set to take advantage of hot markets in New York and New Jersey, both of which recently legalized recreational marijuana this year. The company has two dispensaries in New Jersey and plans to open another in the coming months. It also operates a medical dispensary in New York and is turning a former federal prison in New York into a cannabis facility.

Note that Green Thumb's Q1 performance was from its 56 operating dispensaries in 12 U.S. states. There has been much expansion since; on Aug. 2, the company opened its second store in Virginia. The company also acquired two vertically integrated cannabis businesses in Rhode Island. These include an operating production facility and an open retail location and give it access to one of only three vertical licenses in the state. Developments are ongoing in the state to legalize recreational marijuana.

Because of this rapid expansion, Wall Street analysts are expecting another profitable quarter. According to estimates, Green Thumb could report a revenue jump of 72% year over year to $205 million. For full-year 2021, analysts expect revenue of about $874 million, further rising to $1.1 billion in 2022. Analysts also expect a net profit per share of $0.07 in Q2, compared with a loss of $0.06 per share in the year-ago period. The profit could rise to $0.37 per share for all of 2021, climbing up to $0.68 per share in 2022.

More upside to this pot stock

Green Thumb ended its Q1 with cash and cash equivalents of $275.9 million and total debt outstanding of $100.1 million. The company is in a good financial position to fund its expansion this year. We will know more of its current cash position when it reports its Q2 results. Besides looking at its revenue and profits in those results, investors should also note whether it managed to reduce its long-term operating lease liabilities, which stood at $150 million in Q1. Because cannabis companies are prohibited under federal law from owning bigger production facilities and dispensaries, they tend to rent their space, with the accompanying financial obligations that entails. If its rent bill gets too big, this could affect the company's operations and take a toll on its balance sheet.

The average price target for Green Thumb is $46.40, representing a 44% upside in the next 12 months, which I think is possible. Imagine the hold the company could have on the U.S. cannabis industry if and when it decides to deploy its 111 legal licenses and counting. According to cannabis research firm Headset, legal U.S. marijuana sales could cross $30 billion in 2022.

Its rapid expansion plans, smart acquisitions, stable balance sheet, growing revenue, and continued profits assure me that Green Thumb is set for another record quarter and a fruitful future. Investors who want to take advantage of the marijuana boom should consider putting their money in this evolving pot stock.