The bank has done well during the pandemic and in recent years to improve its operations, but there are still areas that need work.

For the past decade, Regions Financial (RF 0.57%), with $155 billion in assets, has been a pretty mediocre regional bank that hasn't given shareholders much to cheer about. But like many banks, Regions shares got a boost during the pandemic and now trade at roughly 170% of tangible book value. This figure, which is a bank's equity minus its goodwill and other intangible assets, tells you what a bank would be worth if it were to be immediately liquidated.

That's toward the higher end of where Regions has traded during the past decade and is especially good for the bank in this environment of low interest rates. While management has made a lot of good moves in recent years, there are still some changes left to be made. Let's take a look at some of the good work the bank has done as well as some improvements it can still make. 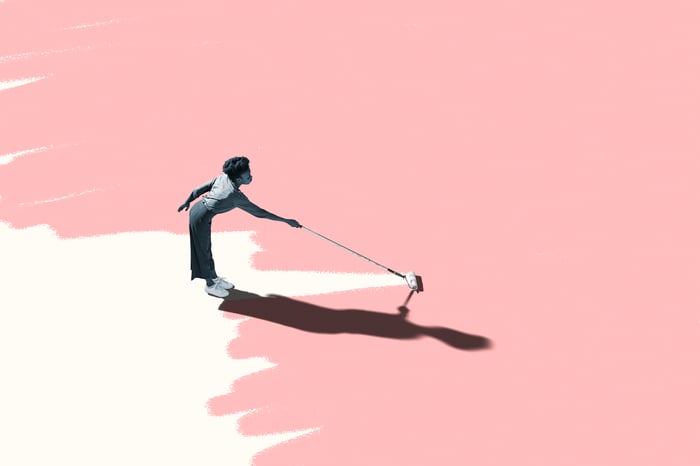 Most banks saw deposits balloon during the pandemic as high savings rates, stimulus payments, and actions from the Federal Reserve and federal government sent trillions of dollars flooding into the banking system.

But Regions has done a better job than its peers of bringing in cheap and so-called sticky deposits, which is one of the top characteristics bank investors look for. Total deposits at Regions surpassed $131 billion at the end of the second quarter, up from less than $100 billion heading into 2020 before the pandemic.

And most of these deposits are noninterest-bearing (NIB), meaning the bank pays no interest on them. NIB deposits at the end of June were almost $56.5 billion, up from just $34 billion at the end of 2019. NIB deposits at Regions now make up nearly 43% of total deposits, which is very strong for a large regional bank. Management also said on its latest earnings call that it believes the bank will be able to retain 20% to 30% of pandemic-related deposit increases once liquidity conditions begin to normalize.

Regions also preserved credit quality during the pandemic and is seeing both its loss-coverage ratio and its loan-loss rates come down as the economic outlook brightens. Management also put the balance sheet to good use, preserving profits throughout the low-rate environment for much of the past year. The bank also continues to enhance its digital banking capabilities.

Despite the good work around deposits and other fundamentals, I still see Regions' lending operations as unproven. Average loan balances between the end of 2016 and the end of the second quarter of this year have grown only 4%.

As it has for many banks, the pandemic has caused most loan balances to decline. Loan growth at Regions before the pandemic wasn't very good, and it's not as if Regions had groundbreaking profitability either. The bank's loan-to-deposit ratio sits at just 64% now, meaning that only about two-thirds of the bank's deposits have been used to make loans. It's not uncommon to see low loan-to-deposit ratios at banks right now, with loan growth pretty much stagnant so far this year, but management does seem optimistic about loan growth for the rest of the year.

I've also wondered why a large regional bank in some very attractive banking markets in the South has struggled for so many years to find loan growth.

The bank recently acquired home-improvement lender EnerBank USA, which finances projects such as pools, solar equipment, roofing and siding, windows and doors, and HVAC (heating, ventilation, and air conditioning). EnerBank comes with $3 billion of high-quality loans that will produce good margins for Regions once the bank applies its lower-cost deposits to the business.

EnerBank also brings along a lot of new potential customers already in Regions' footprint with whom the bank can hopefully create deeper banking relationships. The deal should help soak up some of the excess liquidity on Regions' balance sheet, but the bank also paid a steep price -- equivalent to 300% of EnerBank's tangible book value, so investors will want to see this one work out.

Lastly, I would like to see the bank lean less on overdraft fees, in which banks charge customers fees when they make transactions that exceed the amount of money in their accounts or when a customer's check or electronic transaction is rejected. Among larger banks, Regions is one of the most reliant on the practice. According to the Center for Responsible Lending, overdraft and insufficient-funds fees totaled $373 million in 2019, which equated to more than half of Regions' income from service charges on deposits that year. And service charges on deposits are consistently Regions' largest source of fee income every year.

Management says it has reduced overdraft fees by about 40% during the last decade,but there is simply too much political opposition to the practice right now. Many regional banks are reducing their reliance on the charges, and the longer Regions holds on, the bigger the risk that politicians will move to eliminate or significantly reduce overdraft fees across the industry. Either way, the bank will eventually need to lower its reliance on overdraft fees and increase other sources of fee income.

There has been a lot to applaud in recent years, but I'll be watching several things before really feeling comfortable about Regions.

The good news is that all of these things are certainly achievable.