With excellent prospects, these three companies are built to last and today's prices are attractive.

Although vaccine companies have been grabbing most of the headlines, the healthcare industry extends far beyond this relatively small group. The sector includes medical device makers, diagnostics-focused companies, and, of course, drugmakers. And that's just the tip of the iceberg.

Keeping tabs on this industry for potential investment opportunities can be overwhelming. To help investors focus, I present to you three top healthcare stocks -- one in each of the aforementioned fields -- that are worth buying in August: Medtronic (MDT 0.47%), Exact Sciences (EXAS 0.78%), and Bristol Myers Squibb (BMY 0.31%).

Medtronic is one of the largest medical device specialists. It develops and sells devices in various categories, including diabetes care, cardiovascular diseases, neuroscience, and medical surgical. Whereas many medical device makers focus their attention primarily (or exclusively) on one or two areas, Medtronic's business is more diversified. 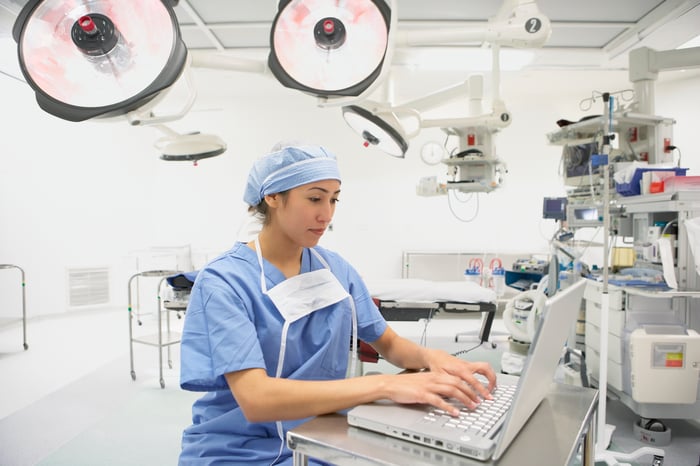 For the fourth quarter of its fiscal 2021, which ended April 30, all four of the company's segments saw strong double-digit percentage sales increases. Neuroscience posted the most impressive growth with a 54% year-over-year revenue jump to $2.3 billion. This performance was due in part to Medtronic's recovery from the pandemic.

During the pandemic, the volume of elective surgeries decreased, harming the company's business. Now, with things slowly getting back to normal, Medtronic's business is on the mend. And the company is well-positioned to continue performing in the long run. Medtronic spends a lot of money on research and development to continue adding new products to its portfolio.

One of the company's more promising new devices is the Hugo robotic-assisted surgery (RAS) system. While it has yet to earn approval in the U.S., the device has already been used by surgeons in several countries in Latin America. Medtronic plans to collect data from these procedures to help with its regulatory submissions around the world.

The RAS market is poised to grow rapidly in the coming years and Medtronic is sure to benefit from this opportunity. Lastly, Medtronic is a Dividend Aristocrat, yielding 1.82% vs. the S&P 500's 1.32% yield. This makes it a good option for income-oriented investors. For these reasons, Medtronic is an excellent buy-and-hold option.

Exact Sciences develops diagnostic tests for the early detection of cancer. It is hard to overstate how important it is to catch this deadly disease as early as possible -- the survival of patients often depends on it. Exact Sciences' flagship product is Cologuard, a non-invasive test for colon cancer.

Colon cancer causes 53,000 annual deaths in the U.S., second only to lung cancer. For adults 45 and older who are at average risk of developing colon cancer -- that is, those without a family history of the disease or a hereditary factor -- regular screening is highly recommended. That's why Exact Sciences' opportunity in this market is vast -- $18 billion according to the company's estimates. Even just doubling its current sales in this market would still be only a small fraction of that amount.

In the second quarter, ended June 30, Exact Sciences' total revenue jumped 62% year over year to $434.8 million. The company's screening revenue (generated primarily through the sale of Cologuard) skyrocketed 101% to $263.9 million. Cologuard registered its highest-ever number of people tested during the second quarter.

And this product still has considerable room to grow given its estimated multibillion-dollar opportunity. But Exact Sciences' prospects aren't dependent only on Cologuard. The company's portfolio includes the Oncotype Dx tests, which predict the probability of recurrence in patients with breast and colon cancer. These tests also help predict whether patients will benefit from chemotherapy.

Last year, Exact Sciences announced it would acquire a cancer-screening specialist named Thrive Earlier Detection. The cash-and-stock transaction, valued at $2.15 billion, closed in January. As a result, Exact Sciences added CancerSEEK, a test being developed for early detection of multiple cancers -- and a possible $25 billion market.

Given the company's expected revenue of about $1.7 billion for fiscal year 2021, even a small fraction (say, 10%) of this multi-cancer screening market could meaningfully contribute to its top line. And that could help the diagnostics specialist to beat the market long term.

Pharma giant Bristol Myers Squibb has a lot to offer investors. First, the drugmaker boasts a rich pipeline that includes at least seven blockbuster products. The best-selling of the bunch is cancer medicine Revlimid. That drug's sales for the second quarter, ended June 30, jumped 11% year over year to $3.2 billion.

Sales of anticoagulant Eliquisplus its cancer drugs Pomalyst and Opdivo all performed strongly in Q2. Opdivo's revenue had actually been declining in recent quarters due to biosimilar competition. But thanks to label expansions, the cancer drug's sales are growing again and it is also being evaluated in more than a dozen clinical trials for several forms of cancer.

Overall, Bristol Myers' pipeline includes more than 50 clinical compounds, and the company routinely records regulatory wins. During the first six months of the year, for example, the drugmaker received 13 approvals for new products or new indications on existing ones. Add that to the company's current lineup, which includes at least seven drugs with growing sales, and it is clear that investors could expect solid revenue and earnings growth from the pharma giant.

This growth should help the company maintain its dividend which offers a yield of 2.85% vs. 1.32% for the S&P 500. Bristol Myers' 36.31% cash payout ratio indicates that it is more than capable of sustaining dividend increases, making it an excellent option for dividend-seeking investors.

It's worth noting that Bristol Myers' shares gained just 8.7% in the past year, compared to gains of 32.7% for the S&P 500. This could at least be partly due to investor concerns about any headwinds because of the pandemic or potential legislation affecting drug pricing. However, I believe this pharma stock is a bargain at current levels, but it may not remain so for too long.