Please ensure Javascript is enabled for purposes of website accessibility
Log In Help Join The Motley Fool
Free Article Join Over 1 Million Premium Members And Get More In-Depth Stock Guidance and Research
By Anders Bylund – Aug 21, 2021 at 8:23AM

The streaming service now supports an upgraded audio experience involving Apple devices. Is it really a game-changing move, though?

Shares of Netflix (NFLX -2.04%) closed Thursday's trading session 4.2% higher, reaching a peak gain of 5.1% earlier in the day. This market reaction added nearly $12 billion to the video-streaming veteran's market cap. Netflix had exactly one piece of market-moving news on the table that day.

The news involved a new feature for some Netflix subscribers who access the service through certain Apple (AAPL -1.96%) devices. Maybe Netflix traders saw the Cupertino logo and connected it to the idea of "big money," but I'm afraid it was an overreaction. Here's why. 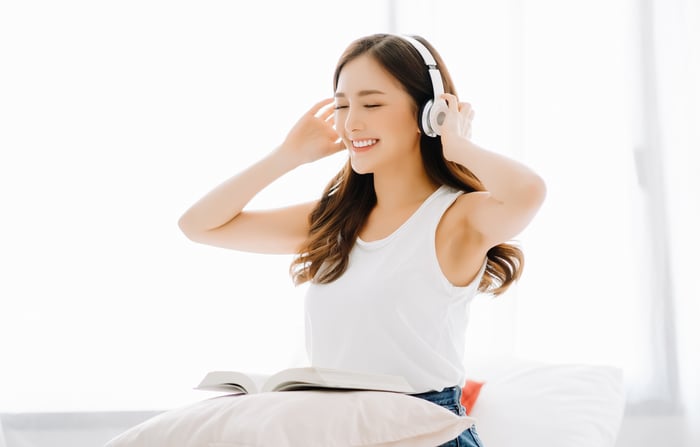 A group of deeply engaged Netflix users realized that some of its titles now support Apple's Spatial Audio technology. This feature relies on the motion-sensing accelerometers in the high-end AirPods Pro earbuds and AirPods Max headphones to deliver an ultra-immersive media experience. Working as an extension of the popular Dolby Atmos system from Dolby Labs (DLB 1.08%), the Spatial Audio platform lets the user travel around the sonic space of a supported media experience.

For example, turning your head while wearing headphones usually doesn't change anything in the viewing or listening experience, even if your gear supports Dolby Atmos. With Spatial Audio, turning your head or walking away from the iPad or iPhone that is playing your media will make it sound like you weren't wearing headphones at all. The idea is to make the listening experience more akin to having a set of live speakers but with all the audio clarity, privacy, and convenience of using high-end personal audio equipment.

Apple is broadly rolling out this feature to recent-model iPhones and iPads after its introduction in May. The company sees Spatial Audio as a unique selling point for the pricey AirPods Pro and Max hardware. The Pro buds will set you back $249 and the Max headset costs $549 in the Apple store today.

Why this feature shouldn't lift Netflix's stock by $12 billion

I would wholeheartedly support Netflix making a move of this caliber if the price boost were based on a new feature for the untold millions of iPhone and iPad users as a whole. But this discovery concerns a much smaller cohort of deep-pocketed fans of Apple's best audio equipment.

Furthermore, the head-tracking functions of Spatial Audio are kind of cool but not exactly a game-changing experience. True audiophiles who insist on a genuine sonic space could always sit down with their finely tuned home theater systems, where the head-tracking audio idea comes naturally.

So we're talking about a small improvement to the Netflix viewing experience for a limited subset of Apple users, and it will take time to roll out full Spatial Audio support to the service's films and shows.

All of this might add up to a significant money-making opportunity for Apple, which now can market its lavish headsets and earbuds with the understanding that they offer Spatial Audio support on the world's most popular video-streaming service. But for Netflix, it's just another minor feather in the hat that is unlikely to unlock any additional revenue streams or additional subscriber sign-ups.

All things considered, Apple might have deserved a $12 billion market-value boost from this move. That works out to an increase of approximately 0.5%, which just gets lost in the ordinary noise of daily market moves anyhow. It's worth a lot less than that for Netflix, so Thursday's jump was dramatically overdone.

Netflix is still a strong buy

Mind you, I generally don't mind seeing Netflix shares make large moves to the upside. It is one of my favorite stocks, the largest holding in my personal real-world portfolio, and a fantastic buy for the long haul. Unrealistic market reactions to minor news items -- like this one -- will soon be swept under Wall Street's proverbial rug.