The iPhone maker is expanding its much-loved AirPods lineup.

Apple ( AAPL 3.16% ) announced on Tuesday the debut of AirPods Max, the latest model to join its AirPods family of devices. Unlike the wireless earbuds that have been such a hit with users, the AirPods Max marks the first over-the-ear wireless headphones in the lineup.

The AirPods Max features active noise cancellation using an outward-facing microphone that detects exterior sounds and counters them with "anti-noise," blocking the sound before the wearer hears it. Users can also switch to transparency mode, which allows external sounds in, letting wearers hear what's going on around them. The AirPods Max will be available to order beginning today for $549 and will begin shipping on Tuesday, Dec. 15. 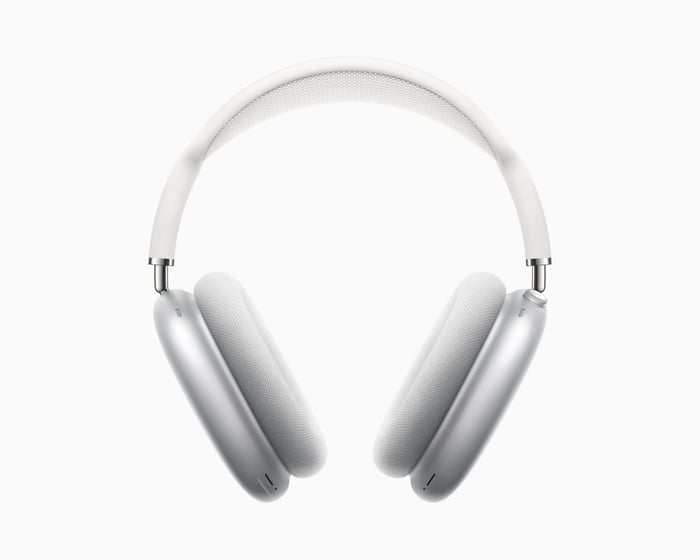 The high-end headphones also offer "Hey Siri" voice commands and will allow easy pairing with iPhones running iOS 14.3 or later versions. Other key features include the ability to switch seamlessly between multiple Apple devices, including the iPad and Mac. Audio sharing lets users share an audio stream on two sets of AirPods using the iPhone, iPad, iPod touch, or Apple TV as a source.

The AirPods Max boasts up to 20 hours of battery life and will be available in five colors: space gray, silver, sky blue, green, and pink. Another interesting feature is that the headphones use optical and position sensors to automatically detect when they are on the user's head, and will pause when removed or when the wearer lifts the earphone away from the ear.

The wearables market has become the next big growth area for the iPhone maker, outside of its services business. The wearables, home, and accessories segment had a record-setting fiscal fourth quarter for Apple, generating revenue of $7.9 billion, up 21% year over year. The business represented more than 11% of Apple's total revenue for the trailing-12-month period.