Hint: It's not the anticipated FDA approval of Pfizer and BioNTech's COVID vaccine.

While Pfizer (PFE -2.01%) and BioNTech's jointly developed COVID vaccine has been a huge boon to the two companies, it's important to make clear that Pfizer's vaccine business runs deeper than simply its COVID offering. As a case in point, the U.S. Food and Drug Administration (FDA) recently approved Pfizer's vaccine Ticovac, for tick-borne encephalitis (TBE), to be used for active immunization to prevent TBE in U.S. patients one year of age and older.

Ticovac is the first vaccine approved for TBE in the U.S. -- a distinct advantage for the company. Let's take a look at what led the FDA to approve the vaccine, why this is a significant development, and what impact it could have on Pfizer and its investors going forward. 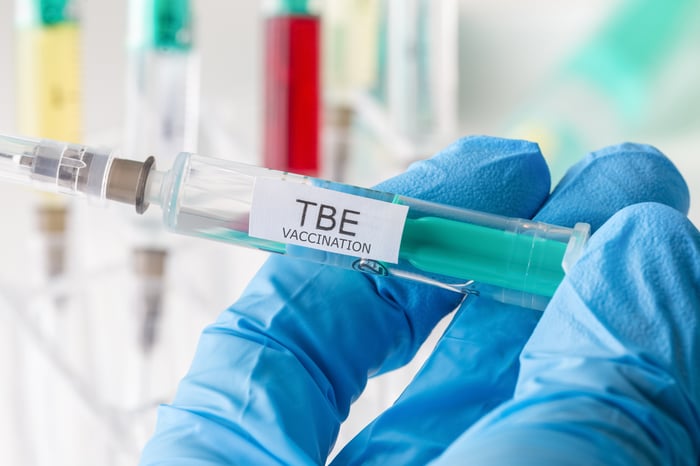 Efficacy against a rare but devastating viral infection

Before we dive into why the FDA approved Pfizer's Ticovac for TBE, some context would be helpful.

According to Pfizer, "TBE is a viral infection of the brain and spine, transmitted to humans through the bite of an infected tick." The condition has been identified in over 35 European and Asian countries to date. Depending on the subtype, the fatality rate ranges from under 2% to upwards of 40%.

Even though the condition is relatively rare, with anywhere from 5,000 to 13,000 patients diagnosed around the world each year, it's worth noting that 1 in 3 people can have long-term effects such as cognitive changes, muscle weakness, and paralysis.

Since Ticovac's first regulatory approval outside the U.S. 45 years ago, Pfizer notes that over 170 million doses of the drug have been administered. Based on decades of data and real-world studies from Austria, Ticovac has been proven to be 96.3% to 98.7% effective at preventing hospitalized TBE in people who have received at least three doses.

The FDA also authorized the option for a fourth booster dose to be given at least three years after completion of the prior series of three doses if ongoing exposure or reexposure to the TBE virus is expected.

What it means for Pfizer

Now that we know the FDA has approved Pfizer's Ticovac vaccine for TBE, we'll turn our attention to the total addressable market in the U.S.

Pre-COVID, tens of millions of Americans traveled to potential TBE locations, such as Europe and Asia, each year. In 2018, 17.7 million Americans visited Europe and 6.3 million visited Asia.

As international travel begins to open up again, especially to those who have received COVID vaccinations, the interest in vaccination against TBE will increase. Even if just 20% of the 24 million Americans who traveled to Europe or Asia in 2018 were to choose TBE vaccination, it's a market of 5 million patients, not even counting military personnel deployed to those regions who may choose the vaccine.

While there isn't yet information on the price of the vaccine per dose in the U.S., I believe we can use the cost per dose in the U.K. as a fair measure. According to the U.K.'s National Health Service (NHS), the cost of a TBE vaccine is "about 65 [British pounds] per injection," or nearly $90 based on current exchange rates between the pound and U.S. dollar.

Conservatively factoring in a cost of $60 per injection (or $180 for the three-shot injection series) for 5 million Americans, this is a billion-dollar market when also including the fourth booster shot that some would choose to receive.

Pfizer is a diversified biopharma worth considering

Although Pfizer's forecast for $78 billion to $80 billion in revenue for 2021 means that the Ticovac approval will have little impact on the company's top line in the grand scheme of things, any company will gleefully accept another billion-dollar market. After all, combinations of billion-dollar markets here and there will eventually add up to many billions. Pharma stock Pfizer is diversified into many promising products, which should drive revenue and earnings growth in the years to come.

Pfizer's top-selling vaccine is its COVID vaccine, which Pfizer anticipates will generate $33.5 billion in revenue for the company this year after its revenue split with BioNTech. Pfizer also has made it clear that it isn't just focused on vaccinating against COVID, but that it wants to offer effective treatments for COVID. One of those treatments in the pipeline is PF-07321332, which my colleague Keith Speights believes could be a blockbuster next year if the request for Emergency Use Authorization is approved by the FDA.

Even with Pfizer's 18% run-up over the last month, the company still appears to be a good pick for healthcare investors, especially those who appreciate a dividend. The stock's 3.2% yield is well-supported by its earnings base and is in a position to grow in the years ahead.