It's older than the dinosaurs.

In the 1992 movie Medicine Man, Sean Connery plays a researcher who finds a cure for cancer in the Amazon jungle. It's a lesson about the role of biodiversity in scientific discovery. And it's not just science fiction: It turns out nature plays an amazing role in medical advances.

One area in particular has fueled Charles River Labs (CRL -1.81%)the global leader in safety testing services. It could also pose a serious risk for shareholders. To appreciate what could go wrong, it helps to understand the blue blood of the horseshoe crab, an animal that has been around for 440 million years. 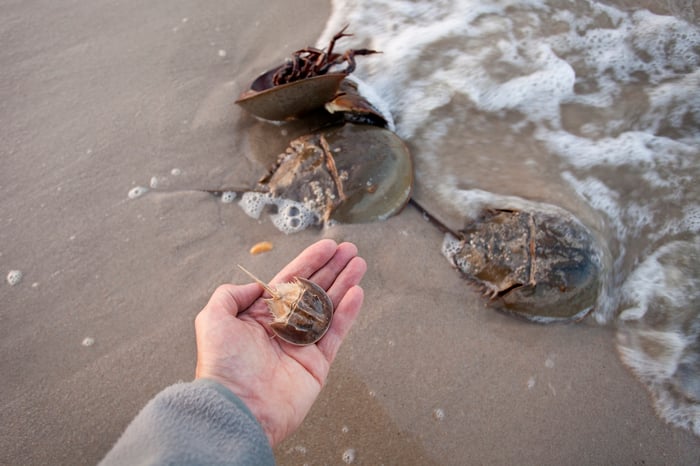 Blue blood of the animal kingdom

Horseshoe crabs are pretty amazing. They're actually more closely related to ticks or spiders than to other crabs. Perhaps the most interesting thing about them is their blue blood. It contains cells that protect it by secreting a toxin-trapping molecule. Scientists long ago discovered it could be used to test the safety of pharmaceuticals and medical equipment like IV bags, pacemakers, and prosthetics. It has even played a key role in testing COVID-19 vaccines.

One of the primary beneficiaries has been Charles River Labs. The company harvests these crabs, extracts some of their blood, and uses it in testing for bacteria. It has 55% market share and boasts a market cap of $21 billion. As you might expect, the pandemic -- and subsequent vaccine testing and administration -- has fueled the company to new highs. The stock is up 177% since the beginning of 2020 and trades at a price-to-sales (P/S) ratio, more than twice what it did before COVID. 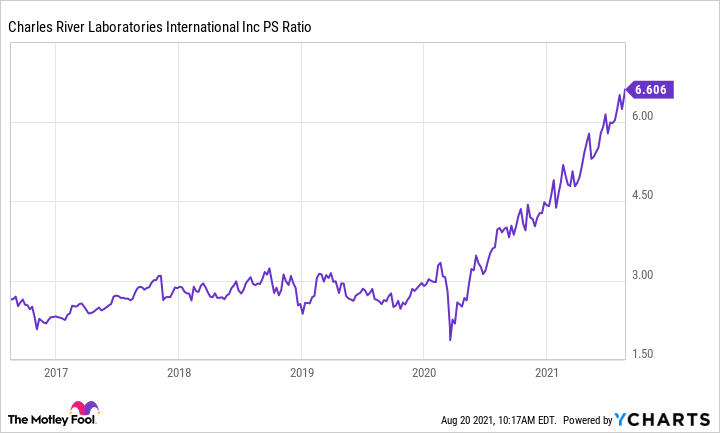 Humans haven't treated horseshoe crabs very well. Before 1991, there were no laws protecting them. Before we knew of their medical value, farmers ground them up to use them as fertilizer. Fishermen have also used them as bait. Now we gather and poke more than 400,000 of them every year to collect the magical blood that runs through their bodies. They are returned to the sea, but at least 10% of them don't survive the journey -- which can take up to three days. Even those that survive have been shown to exhibit lethargy and decreased navigational behavior.

That's why conservationists have sued to block the harvesting in some areas. To its credit, Charles River appreciates the delicate balance it must hold between commerce and nature. The company contracts only with fishermen trained to harvest the creatures and commits to returning them within 24 hours. Management claims an industry-leading survival rate for their donor animals. Recent surveys in the Southeastern Atlantic coast have indeed shown healthy and growing populations in recent years. But environmentalism isn't the only threat.

It's natural to ask why an artificial substitute for the crab's blue blood can't be developed. It has. Lonza Group (LZAGY -2.96%), a Swiss company best known for manufacturing Moderna's COVID-19 vaccine, launched a product called PyroGene in 2003. It wasn't until 2018 that the U.S. Food and Drug Administration (FDA) approved a drug tested with the method.

Charles River risks falling behind as the animal-free approach gains traction. A leading independent nonprofit dedicated to establishing safe medicines, U.S. Pharmacopoeia (USP), is on board. However, in May 2020 the group decided it needed more real-world data before accepting the synthetic method as equivalent. Plans for the test are still moving forward. There is a lot at stake. The testing market for endotoxins is expected to reach $1 billion by 2024.

The company does acknowledge the risk of a synthetic test in its SEC filings. And it claims to be interested in a refined or reduced use of animals in its testing. However, it may be too little, too late. With the USP on board, it seems like a question of if -- not when -- the horseshoe crab's blue blood is replaced. The critical role it played in humans' medical safety will just be a blip in its nearly half-billion-year history. And Charles River shareholders will be asking what is going to replace the revenue.