A short squeeze isn't the only factor sending the self-driving truck stock higher.

Shares of autonomous trucking tech start-up TuSimple Holdings (TSP -5.93%) were on fire today, jumping a staggering 27.8% as of 1:40 p.m. EDT. The stock started to reverse course on Aug. 16 after a precipitous decline, and there's just been no stopping it. The stock is now up a jaw-dropping 62% since.

There was no news at all from or about TuSimple today, so what set the stock on fire? Four things, I'd say: a short squeeze, investor perception, a driver crunch in the trucking industry, and China.

Let's start with the last. After greater scrutiny from regulatory authorities that led to nerve-racking volatility in Chinese stocks in recent weeks, CNBC reported today that China could finally slow down its pace of new regulations now that it has passed a data protection law. For now, that seems to have abated fears about Chinese stocks. Although TuSimple primarily operates in the U.S., it has operations in China and considers the nation a key growth region.

Meanwhile, TuSimple bulls and bears are walking a tightrope. The stock was under a lockup period until some days ago that prevented certain investors from selling their shares. Short-sellers dived all-in as the lockup neared its end in anticipation that the stock would crash thereafter. As of July 29, nearly 7.4 million shares of TuSimple were shorted. 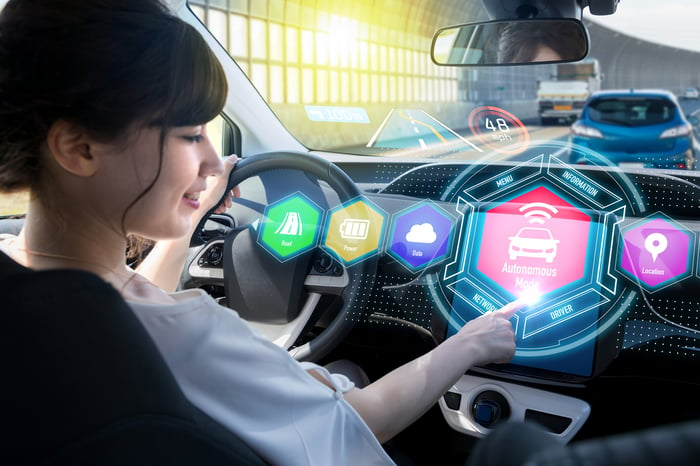 The reverse actually happened. Shares are headed for the skies ever since the lockup period expired, triggering a massive short squeeze as short-sellers are scrambling to close out their positions, sending the stock price even higher today.

As if Cathie Wood's attention on autonomous technology weren't enough, more and more industry reports are confirming how big the driver crunch is turning out to be. Just days ago, Eric Fuller, CEO of truckload carrier U.S. Xpress Enterprises (USX 10.31%), told Yahoo! Finance that the ongoing driver shortage is the worst he's seen in his entire career.

Driver shortages are compelling trucking companies to chalk out alternative strategies for the long term. TuSimple's autonomous-driving software for trucks is being looked upon as part of a solution to a big problem. In fact, U.S. Xpress itself is invested in TuSimple!

As the first autonomous-trucking software company to go public, TuSimple certainly has an edge. Any stock targeted by short-sellers, especially if it recently went public, is bound to be volatile. But with big investors and partners putting their weight behind TuSimple, you might want to pay attention to the stock's long-term story as it builds.

Why TuSimple Stock Is Jumping 25% Today

Why TuSimple Stock Is Lower Today
356%