The cruise lines have to deal with even more challenging CDC guidelines.

Getting back to business has been harder than many people expected for the cruising industry. The historically potent summer season has been a wash, as false starts, the surge of the delta variant, and political wrangling have kept sailings in check for Carnival (CCL 0.30%) (CUK -0.34%), Royal Caribbean (RCL -0.66%), Norwegian Cruise Line Holdings (NCLH -0.48%), and Walt Disney (DIS 0.85%).

The Centers for Disease Control and Prevention updated its guidance for cruise passengers late last week. It's now urging that even those who have been fully vaccinated to avoid cruises if they are older adults, immunocompromised, or dealing with obesity.

It's not breaking news that the CDC is urging caution for particular groups. We've long known that surviving COVID-19 is more challenging for folks who are older, have pre-existing medical conditions, or are extremely overweight. However, the new guidance -- suggesting that even vaccinated folks in those groups steer clear of cruise ships -- is a significant update. The near-term prospects for the cruise line industry get even worse when you check the calendar. 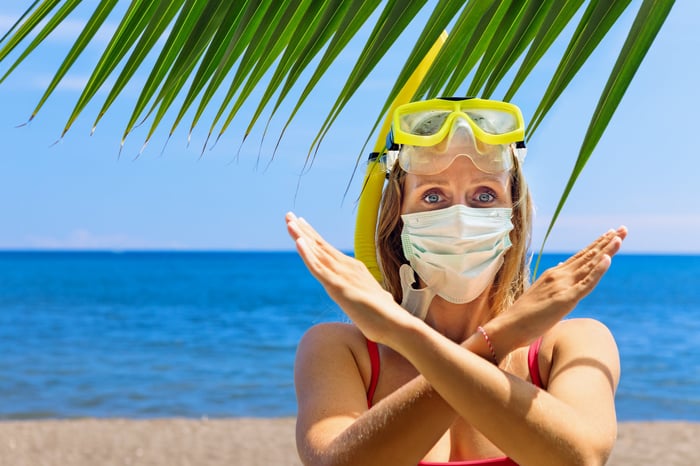 Fall is in the air

It's still technically summer for a few more weeks, but the new school years have started in the popular port states of Florida and Texas. Summer vacations -- including summer cruise vacations -- are no longer on the travel menu.

Fall is when passengers start to skew older for the industry. Families with children in school or college find it hard to take a week or more off once the new academic years start in August and September. Autumn cruising is popular for retirees, taking advantage of unique itineraries and lower price points once the demand for young families dries up. In short, the CDC is recommending that older passengers to stay away regardless of vaccination status just as we're heading into the the time of year when they make up the lion's share of the target audience.

No one is saying it will be impossible to fill a boat under these new guidelines. They are merely recommendations for Carnival, Royal Caribbean, NCL, and Disney right now. No matter what you may think about when you conjure images of all-you-can-eat dining stations and midnight buffets, many older cruise passengers tend to be fit and active. However, the new guidance will make a slow season even more problematic for the industry.

Royal Caribbean and Disney announced on Tuesday that they will be following Norwegian Cruise Line, but it's not necessarily out of a desire to get into legal fisticuffs with Florida Gov. Ron DeSantis. They don't have much of a choice. The Bahamas -- where most cruise lines including Royal Caribbean and Disney have private islands that are popular ports of call -- and St. Thomas aren't letting ships in unless all passengers and crew members are vaccinated. As important as it may be to keep the tourism industry going in those hard-hit island nations it's even more important to keep their citizens safe from potential COVID-19 outbreaks.

We're now more than 17 months removed from when the cruising industry suspended operations, and this summer's restart in the U.S. has been slow and challenging. Investors in cruise line stocks will need to be patient. Sooner or later the breaks will start to happen, but for now the headline risks remain all too real.