This bargain marijuana stock comes with a huge twist.

As it turns out, Trulieve faces several stumbling blocks ahead, with its growth looking poised to fall off a cliff. So is this a good time to open a stake? 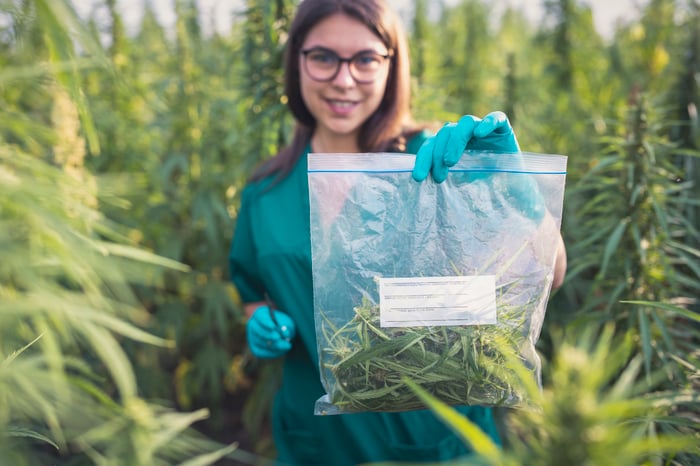 Because of its sheer size, Trulieve is having difficulties sustaining historical rates of growth. Its revenue and EBITDA increases are lower than last year, when they roughly doubled. So it's going ahead with its $2.1 billion acquisition of Harvest Health (HRVSF) to make up for the shortfall. The deal has received approval from the Supreme Court of British Columbia, where Harvest Health is domiciled.

Once it is finalized, Trulieve will add 42 more dispensaries to its roster, which it is focusing around three cannabis "hubs" in the East, West, and Gulf Coast. During Q2 2021, Harvest Health grew its revenue 84% over the prior year's quarter to $102.5 million, mainly thanks to skyrocketing cannabis sales in Arizona. But don't get too excited about Trulieve's prospects just yet.

It's quite clear to any outside observer that Trulieve holds the dominant position in the Florida medical marijuana industry -- it operates 88 of its 98 total stores in the Sunshine State, where it commands a 46% market share. However, don't assume that the company attained this success due to sheer perseverance and hard work. Earlier this month, a secretly recorded conversation between former state representative Halsey Beshears and J.T. Burnette, a businessman and the husband of Trulieve's CEO Kim Rivers, came to light.

During the recording, Burnette bragged about working with Beshears to grant his then-girlfriend, Rivers, and Beshears's brother Thad (who is now on Trulieve's board of directors) an advantage in their application for one of five medical marijuana licenses in the state. After the conversation, criteria -- including requirements for dispensaries to put up multi-million dollar bonds, have an inventory of 400,000 cannabis plants, and be incorporated (while conducting non-cannabis operations) for 30 consecutive years -- were added at the last minute to Florida's medical marijuana bill. This made it impossible for Trulieve's competitors to qualify for a dispensary license.

On Aug. 15, Burnette was found guilty of five charges involving extortion and lying to the FBI in unrelated cases. Trulieve is currently not under investigation for alleged past misconduct.

So should I invest now?

Trulieve could be in major trouble if it does come under federal investigation for alleged uncompetitive behavior. In addition, the company was dealt a serious blow after President Biden backtracked on his campaign promises by opposing the legalization of marijuana. While decriminalization is still possible, that would still leave marijuana as illegal to transport or ship across state lines. That means Trulieve would not be able to leverage the centralized hubs it created with its recent Harvest Health acquisition to save costs.

And there are challenges facing Biden or any president who moves forward with federal legalization. For one thing, the U.S. government would then need to answer for why it put hundreds of thousands, if not millions, of people in prison over the past decades for growing, using, and/or distributing a drug with multiple medical benefits -- opening it up to a wave of litigation. This wasn't much of an issue in Canada as penalties for marijuana possession were never that harsh, even during the height of the War on Drugs. On the other hand, federal U.S. legislation in 1986 mandated judges to hand out five- to 40-year sentences for first-time offenders convicted of possession with intent to distribute small quantities of designated substances (including marijuana), with no chance of probation or parole. The penalties have been watered down since then, but many of the felony sentencing guidelines still remain to this day.

Overall, it's important to understand that Trulieve could be in line for major legal liabilities, is seeing its growth slow down, and won't synergize that well with Harvest Health until cannabis is legalized on the federal level. All that said, these things are priced into the stock, which is trading at just 3.8 times forward revenue and 20.7 times earnings. These metrics are only a fraction of what its competitors like Green Thumb (GTBIF -1.17%) and Curaleaf (CURLF -0.41%) stocks are fetching. So if you have a big appetite for contrarian investments, consider buying Trulieve stock on the dip.

Zhiyuan Sun has no position in any of the stocks mentioned. The Motley Fool owns shares of and recommends Green Thumb Industries and Trulieve Cannabis Corp. The Motley Fool has a disclosure policy.

Can Trulieve Recover From the Harvest Deal?
351%