eXp is redefining how homes are sold by making top agents an offer they can't refuse.

You probably haven't heard of real estate business eXp World Holdings (EXPI 2.79%), but its recent growth suggests it could soon become a household name. eXp is making waves in the industry by attracting the best real estate agents with generous incentives and a fully digital workplace. The company's focus on making agents happy gives eXp the keys to achieve high growth in revenue and volume while expanding across the globe.

Getting agents in the door

eXp understands a crucial real estate idea: Having the best agents work for you brings customer satisfaction, customer loyalty, and immense revenue growth. Its unique ability to attract those top agents helped the company grow revenue 183% in the second quarter.

To get the best agents, eXp has to offer the best incentives. eXp charges agents very low start-up fees, along with a generous 80/20 split on the first $80,000 of gross commission income, or GCI. Where most brokerages -- like Keller Williams -- sometimes take 30% of all an agent's GCI, eXp is taking less, and only for the first $80k. After the agent reaches $80,000 in GCI, they get 100% of whatever they make; many traditional brokerages do not have a GCI cap. 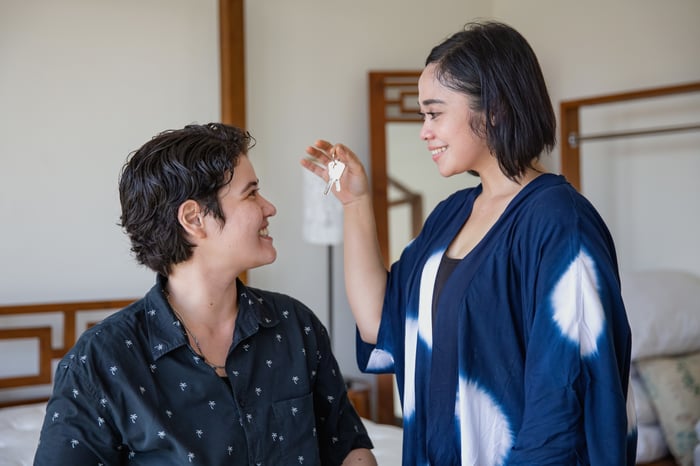 The benefits don't stop there. The company offers agents a total of up to $1,000 in stock for reaching certain milestones. Agents can get up to $16,000 more in stock, vesting over several years, when they meet ambitious sales goals, mentor other agents, and attend certain company events. Agents can also receive 5% of their commission in stock at a 10% discount -- a program in which roughly 25% of agents participate. The agents who benefit eXp the most can receive thousands of dollars in additional stock. The company also announced a small dividend of $0.04 per quarter to shareholders -- agents included -- further cementing agents to eXp.

eXp has yet another advantage: a completely digital workplace. Its virtual office, Virbela, allows agents across the globe to work completely online. Though this feature came in particularly handy during the pandemic, eXp has been doing this since 2018. The lack of capital costs like offices allows the company to spend even more on agent incentives.

Building on the foundation

eXp's successful international expansion puts the "world" in eXp World Holdings. With agents in 17 countries across six continents, eXp has been using its strong domestic growth as a foundation to start building out its offerings around the world. eXp only employs around 3,000 of its more than 58,000 total agents outside of the U.S. and Canada, so the company has plenty of room to continue building its international business.

The incentives that international agents receive in comparison to the industry standard are much greater than those for domestic agents. The company offers a 75/25 agent commission split on GCI internationally, whereas most international brokerages offer a 50/50 split.

In addition, eXp has chosen international regions that could see tremendous economic growth in the future. India, for example, is expected to grow its GDP in purchasing power parity -- removing price-level differences between countries -- by 400% over the next 30 years. If eXp can insert itself into the economic foundation of these developing countries, the company could grow with them.

The cost of all those agent goodies

Two factors diminish this business's value. First, all those amazing agent incentives lead to paltry 8% gross margins. eXp spent almost $920 million in commissions and other agent-related costs in the most recent quarter, against $1 billion in revenue. That means it spent 92% of revenue on commission expenses. For the quarter, its operating margin looked even slimmer, at 1.6%. Compare that to Compass, which spent only 81.5% of revenue on commissions. The company hopes that strong future growth will make up for the poor margins.

To flip this problem on its head, management has been aggressively buying back stock, including nearly $55 million in the second quarter alone. If it hadn't, dilution would have likely been much higher. But eXp easily covered this expense with the $85.1 million in free cash flow it posted during the same quarter. The company is profitable, with net income of $37 million, and it plans to keep using its $100 million cash hoard and growing free cash flow -- which more than doubled year over year in the second quarter -- to fund more buybacks.

Disrupting an industry is not cheap, but management's willingness to take on the challenge seems to be paying off. Revenue has grown 140% per year over the last five years. This quarter, the dollar amount of houses eXp sold grew 210% year over year, while net income rose 350%.

eXp is growing in popularity, even as traditional brokers like Compass and emerging digital players like Zillow and Redfin launch bidding wars over the best agents. So far, eXp is winning those wars, offering agent incentives that no competitor can currently match. Keep an eye on the percentage of revenue it pays back to agents, relative to its competitors. If that edge persists, it could help eXp build a mansion of a business while pushing its competitors into the dumps.