Investors have started to take for granted the relative strength of the Nasdaq Composite (NASDAQINDEX:^IXIC) compared to other major market benchmarks. That trend continued on Monday, with the Nasdaq up nearly 1% as of 12:30 p.m. EDT, even as some stock market indexes were closer to unchanged on the day.

The market's recent run has pushed the Nasdaq toward new highs, and many of the most influential stocks in the index have played critical roles. Below, we'll look at three stocks that are hitting all-time record levels on Monday, to see what sent them there and what could lie ahead for the companies. 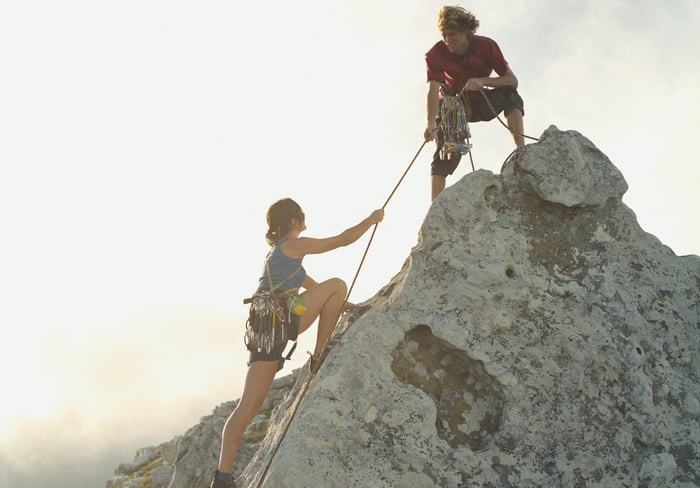 Shares of Alphabet (NASDAQ:GOOG) (NASDAQ:GOOGL) rose almost 1% at midday on Monday. That was good enough for a record, and the parent of the Google search engine empire has a market capitalization approaching the $2 trillion mark.

Alphabet has huge potential, benefiting from advertising revenue but also tapping into hot growth areas like cloud computing. The company's YouTube segment is an underappreciated asset that's seeing strong adoption from new generations of users. Meanwhile, other services like Google Pay are fleshing out Alphabet's lineup.

Yet even with its recent share-price jump, many investors have missed out on Alphabet. Even with its top valuation, however, there's a lot to like about the tech giant's prospects from here.

Athletic apparel has been a high-growth area for decades, and Lululemon Athletica (NASDAQ:LULU) has cashed in on the trend. The stock has soared since the company's founding, and today's rise of nearly 3% brings Lululemon's market capitalization to around $56 billion.

Lululemon has overcome past adversity to regain and maintain its customers' loyalty, and especially during the pandemic, that has resulted in huge sales gains. The yoga apparel specialist is slated to release its latest quarterly results in early September, and most of those following the stock expect that the company will generate revenue gains of 47% year over year.

Lululemon has been able to translate its brick-and-mortar store success to its e-commerce channel, and now both distribution methods are helping to drive the company's business forward. The recent acquisition of interactive fitness equipment maker Mirror should also help bolster Lululemon's prospects. It's easy to see the potential for Lululemon to keep picking up steam throughout the rest of 2021 and beyond.

Shares of Atlassian (NASDAQ:TEAM) picked up another 2%, sending the Australian workplace collaboration software giant to a record. With the rise, the company is fast approaching the $100 billion mark in market capitalization.

Atlassian has benefited greatly from the digital transformation that businesses across the globe have adopted over the past several years. With its subscription-based software products available on the cloud, Atlassian has helped make it easier for companies of all types and sizes to manage projects and ensure strong communication across entire organizations. In its most recent quarter, Atlassian continued to see strong sales growth of 30% year over year, with a 36% rise in customers.

Atlassian's gains have been impressive. But with a still relatively modest size, it could well continue to plow ahead in its massive addressable market a lot further into the future.