One of the effects of economic reopening is an increase in marketer spend.

At the pandemic's onset, marketers reined in their ad spending as the direction of world economies was uncertain. The advertising market remained depressed as governments worldwide imposed economic lockdowns to slow the spread of a deadly virus.

A fortunate few businesses were allowed to remain open. Deemed essential, the businesses had the responsibility to serve a public that was hunkering down at home. Still, with much of the economy closed and facing a surging demand from the public, essential retailers had little reason to advertise.

Thankfully, billions of doses of effective vaccines against COVID-19 have been administered, and economies are reopening. That's requiring businesses to get the word out that they are back. The flood of marketers returning to the marketplace is boosting prices for advertising, and that's good news for The Walt Disney Company (DIS 0.85%). 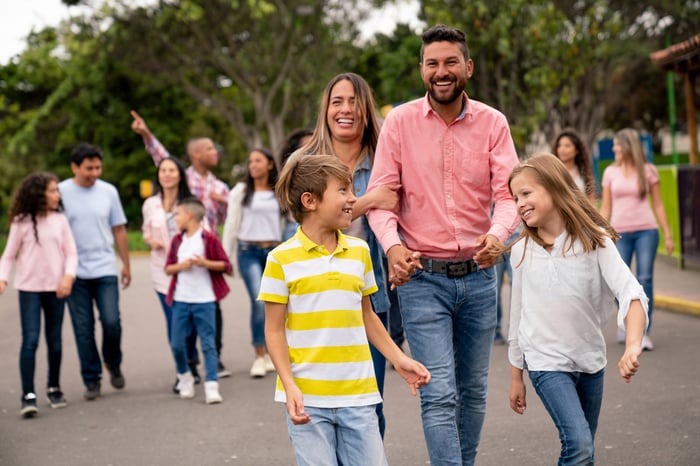 The price to get your attention is going up

The House of Mouse runs a wide business empire that includes theme parks, hotels, resorts, cruise ships, studios, streaming services, and more. While the company doesn't break out the figure specifically, advertising revenue is a meaningful part of its operations. Therefore, an increase in the price of ads will have an additive effect on the company's revenue and earnings.

And indeed, the price of ads is rising. Alphabet (GOOG -0.44%) (GOOGL -0.55%), one of the largest sellers of advertising in the world, reported in its most recent quarter that the cost per click increased by 31%, and the cost per impression increased by 63%, from the same time last year. Admittedly, these metrics are more relevant to digital advertising on phones, tablets, and computers. Still, it sheds light on soaring prices to gain people's attention. After all, many of the same businesses on Alphabet are also spending on Disney's cable networks or streaming services.

In its most recent quarterly report, Disney also mentioned that increases in ad prices are helping offset the losses from people canceling their cable subscriptions. The long-running trend of cutting the cord and switching to streaming services harms Disney's bottom line as the cable segment is more profitable than its rapidly growing streaming services.

In its fiscal 2020, when the business was being devastated by the effects of the pandemic, its media segment earned 111% of the company's operating profits. With higher prices to gain people's attention, Disney can earn the same revenue with fewer cable subscribers -- a welcome sign as the company transitions its focus to developing its streaming services.

One of its streaming services (Hulu) is offered with advertising at a lower price. Consumers can choose from an ad-supported version of Hulu for $5.99 per month or pay $11.99 per month without ads. Increasing prices for advertising could give Disney the option to subsidize the cost of its ad-supported version to attract more subscribers or allow the added revenue to flow to the bottom line.

Although economies are reopening and businesses have reason to spread the word, there is still significant strain in world economies. Supply shortages are abounding everywhere you look, which keeps retailers from spending as much as they would on marketing 1if their shelves were fully stocked. The trend of increasing ad-space prices could have more room to grow.

Moreover, the end of the pandemic is still nowhere in sight. Outbreaks are frequent and cause disruptions in manufacturing and logistics. Thankfully, the direction is generally positive, and as more of the world gets vaccinated, people will have more options for where they can spend money, which will cause marketers to ramp up their calls to attract customers.