The home improvement giant has been a rewarding holding for its investors, but they need to have reasonable expectations going forward.

Home improvement retailer Home Depot (HD 0.28%) has given investors stellar returns over the past decade -- it's up by 865% in that period, more than tripling the return of the broad market. The business is doing better than ever on the back of a scorching hot housing market, which is driving demand for building and remodeling supplies.

However, investors looking for the stock to repeat that kind of performance are likely to come away disappointed. There are several clues that Home Depot will cool down in the years ahead.

Even if you're not looking to buy or sell right now, it's hard to miss the fact the U.S. housing market is beyond hot. According to the National Association of Realtors, the median price for existing homes jumped 17.8% year over year in July (following a 23.4% increase in June). 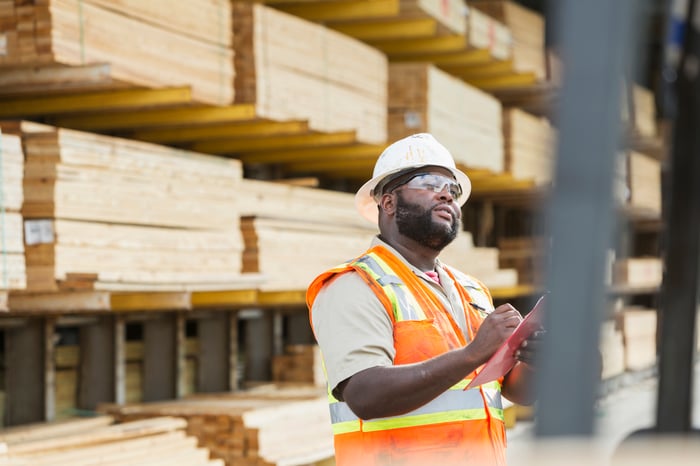 A quick internet search will produce videos of people lining up to tour homes for sale, stories of sellers being flooded with offers, and buyers having to bid far more than a property's list price just to have a shot at coming out on top.

A combination of factors are contributing to this environment: record-low interest rates on mortgages; the rapid normalization of telecommuting, which has given many people the option to live far from their "offices"; and the government's distribution of stimulus money during the pandemic, which could be helping people save up for down payments.

As sellers fix up their properties in preparation for a listing and buyers remodel their new purchases, Home Depot has seen an uptick in revenue growth. Sales grew just 1.8% in fiscal 2019 but 19.9% in fiscal 2020.

Overall, its business is quite sensitive to the state of the housing market. For example, its top line shrank about 15% between fiscal years 2007 and 2009 after the housing bubble burst, setting off the financial crisis. Much of the past decade has been a recovery from the Great Recession. If the next decade features its own downturn in the housing market, that would likely stunt Home Depot's growth.

2. Home Depot is fighting the law of large numbers

Home Depot also faces the obstacle of its own size. Most businesses find it increasingly difficult to grow at their previous rates as they get larger. For example, it is generally much easier to go from $10 to $100 in sales than $100 to $1,000, despite both being a 10-times increase.

Home Depot nearly doubled its annual revenue from $67.8 billion in fiscal 2010 to $132.1 billion last year. It will likely take the company considerably longer to double its top line again, if it ever does so at all. As the size of a company increases and the underlying business matures, its growth must eventually slow down. It's the "circle of life" for a business, and it's one reason why stocks of maturing companies usually trade at less expensive valuations.

3. Not a lot of room for valuation to expand

If Home Depot's growth does slow down in the coming years, what could happen to the valuation? The stock trades at a price-to-earnings ratio of 23. Over the past decade, the stock has averaged a P/E ratio of 22, so it is currently just above that long-term average. But let's keep in mind that period coincided with a surge in Home Depot's business, and the overall stock market has been steadily hitting new all-time highs.

If conditions for Home Depot's business cool off, it could be difficult for the market to support a valuation for the company as high as it did during the last decade. And don't forget the recent double-digit growth is a near-term outlier driven by the current state of the housing market.

None of this is meant to suggest that Home Depot is a bad investment. It's one of the world's largest and best-run retailers, but the bigger a company gets, the harder it becomes to sustain the same pace of growth. Home Depot sells lumber, paint, appliances, and tools -- that isn't a business model that can expand and scale in the way a technology business might.

The company is also benefiting right now from some of the best operating conditions it has ever seen, so it's possible it can maintain its momentum in the near term. However, the odds are quite low that Home Depot stock will deliver more multibagger returns over the next decade.

Did Home Depot Just Hint That It's Reached Its Peak?
376%