Please ensure Javascript is enabled for purposes of website accessibility
Log In Help Join The Motley Fool
Free Article Join Over 1 Million Premium Members And Get More In-Depth Stock Guidance and Research
By Jamie Louko – Sep 1, 2021 at 8:30AM

This disruptor is making it easy for consumers to find their prescriptions for the cheapest price.

When GoodRx (GDRX -0.45%) founder Doug Hirsch realized that Americans lacked a one-stop destination for prescription discounts and prices, he decided to build an app where consumers could get the cheapest prescriptions available. With its unique customer-centric business, GoodRx holds a key competitive advantage in the industry, and its growing popularity could enable the company to become a product that every American uses.

The U.S. doesn't regulate prescription drug prices like other countries do. This lack of regulation allows pharmacies to set their own varying price for drugs. 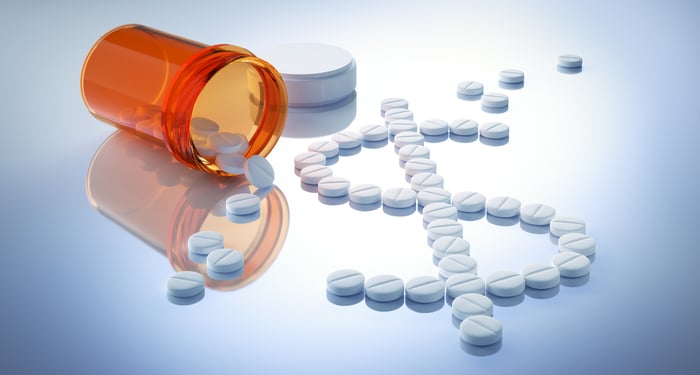 There are also tons of middlemen trying to make money between drug manufacturers and consumers. Manufacturers sell to distributors who sell to pharmacies, and pharmacy benefit managers, or PBMs, fight to get the best prices for insurance companies. In exchange, PBMs get a slice of every transaction. Five separate hands in the pot result in variable, opaque prescription prices.

GoodRx partners with PBMs to display the price at which pharmacies buy the drugs, and allows GoodRx to offer prescriptions at that price to the consumers. PBMs love it because they can more easily collect their slice of transactions, and pharmacies need to accept GoodRx or risk losing business to rivals who do. The biggest winner in this entire transaction are consumers -- who can easily find the cheapest prescriptions.

GoodRx takes a small cut of the transaction, which begs the question: Isn't it just another middleman in this complex process? Yes, but GoodRx is the only customer-focused middleman. It lowers pharmacies' retail markups by offering consumers wholesale prescription prices, giving consumers a better bargain than they'd otherwise get.

GoodRx's platform looks great in theory, and its financials seem to bear out that promise. In the most recent quarter, revenue grew 43% to $176 million and reached 6 million monthly active customers, up 36% year over year. GoodRx's main platform is free, but it also offers a Gold version -- which offers even cheaper prescription prices for a $6 monthly subscription for individuals, or $10 for families-- that over 1 million additional customers use. The company's subscription members increased 86% year over year, driving revenue 125% higher to $14.3 million.

GoodRx has other forms of revenue, including telehealth and manufacturer solutions -- in other words, advertising revenue from drug manufacturers. GoodRx offers free information about prescriptions and other healthcare matters where these manufacturers can advertise their drugs and services. These revenue streams grew 136%, passing $17 million last quarter.

GoodRx enjoyed a gross margin of 95% in the most recent quarter, alongside an adjusted EBITDA margin of 31%, which helped the company  solid net profits. Because of large stock-based compensation, or SBC, grants related to last year's IPO, net income has been very lumpy, but GoodRx could be continuously profitable as those grants fade away. Even after $41 million in SBC, the company still booked $30 million in net income in the recent quarter. Investors should, however, expect this figure to remain volatile in the short term.

Customers love GoodRx's services, giving the company a net promoter score (NPS) of 90 out of 100 in 2020. GoodRx has saved consumers an estimated $30 billion since 2011, so this satisfaction should be no surprise. Even high-quality, industry-leading businesses such as Netflix (NFLX -0.07%) only have NPS scores around 55-58.

The side effects of owning an industry disruptor

Companies that disrupt an industry typically attract competition. Recently, Amazon (AMZN -1.63%)  attempted to enter the prescription industry by launching Prime Rx. But Prime Rx focuses mostly on mail-order prescriptions rather than GoodRx's retail prescriptions, which only make up 5% of Amazon's total prescription fill count. For this reason, GoodRx does not view Amazon as much of a threat today. While nobody should underestimate Amazon, it hasn't been able to take any market share away from GoodRx so far.

High stock-based compensation might also give investors pause. After its IPO, GoodRx planned to give over $530 million in stock bonuses to its co-CEOs -- $470 million of which has already been paid out. The company will still be dishing out roughly $60 million over the coming quarters, damaging profitability.

GoodRx has been able to push back competition, making way for its dominant position. Its strong growth in subscription users could result in even larger revenue growth in the future. Looking forward, investors should watch for user growth -- specifically subscription user growth -- and keep an eye on stock-based compensation. If it can grow its customer base and keep costs low, GoodRx could help even more Americans find the cheapest prescriptions for many years to come.