Please ensure Javascript is enabled for purposes of website accessibility
Log In Help Join The Motley Fool
Free Article Join Over 1 Million Premium Members And Get More In-Depth Stock Guidance and Research
By Nicholas Rossolillo – Sep 2, 2021 at 8:33AM

These three companies used surges in online activity to their benefit over the last 18 months.

The retail economy had to cope with unprecedented change in the past decade. Spurred on by Amazon's epic growth, retailers struggled to adapt to a modern selling model that made use of the internet and flexible order fulfillment. The pandemic not only cemented this new operating model into place, it also produced a surge in online activity while providing plenty of new opportunities for traditional brick-and-mortar businesses to acquire new customers and get up to speed for the digital era. 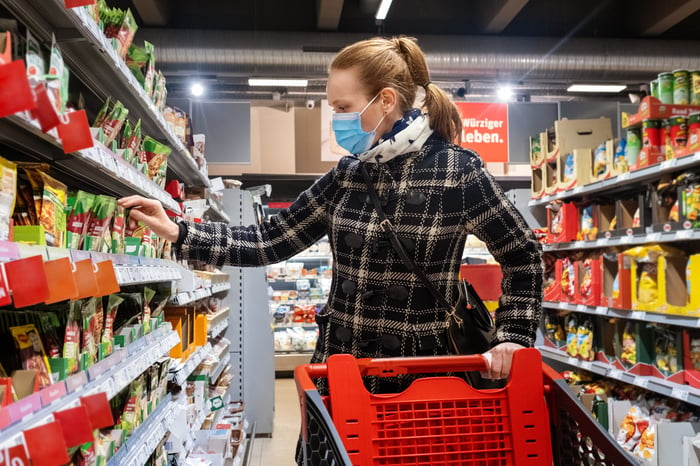 Target: The heir apparent to the department store model

The big box store concept has had its fair share of Amazon-induced headaches in recent years, but Target has seemingly cracked the code and enjoyed robust growth during the pandemic. A combination of one-stop shop department store categories (clothing, home furnishings, electronics, etc.) along with household basics and groceries are part of its equation. More than just an also-ran option, Target's in-house brands have also turned into top-of-mind labels in many lucrative segments of retail, providing growth while department stores overall continue to struggle.

But Target is also winning because of its flexible fulfillment terms. It offers delivery via its wholly-owned subsidiary Shipt, in-store and curbside pick-up options, and of course the traditional shopping experience. No matter how consumers prefer to shop, Target has a format to match. In its fiscal second quarter (the three months ended July 31, 2021), Target reported an 8.9% year-over-year increase in comparable sales, building on the more than 24% surge reported in the same period last year when the COVID-19 outbreak was still in its early stages. Digital comps were also up 10%, and all five of Target's sales categories recorded year-over-year comps growth.

Clearly, the company is doing something right and winning over shoppers. And because 95% of all sales are fulfilled by an actual store (versus a distribution center), Target has been able to efficiently repurpose its existing real estate footprint for this digitally enhanced retail experience. Second-quarter earnings per share more than doubled from where they were in 2019. As a result, this is a rock-solid dividend payer currently yielding 1.5%, and management announced a new $15 billion share repurchase program (worth nearly 10% of Target's market cap).

It's been an epic run for Target stock, which has returned over 180% in the last three years. That impressive run isn't over, though, as this big box retail leader is also a top digital commerce business. Best Buy has long utilized similar digital-fulfillment methods as Target, bolstering its online and physical stores with flexible options like curbside pickup and direct shipping. But Best Buy has also benefited from increased demand for tech devices in the last 18 months. Stay-at-home orders pushed millions of people toward the work-from-home movement, and along the way, households have required new device upgrades to manage their needs. The company has thus enjoyed strong sales as of late.

Compared to its fiscal 2020 second quarter (pre-pandemic), Best Buy's revenue in its latest report was up 24%. And like Target, its bottom line surged with operating income doubling over that span. Last spring, the company's stores were relegated to online shopping and curbside pickup only, so it's not a surprise digital sales were down 28% year over year. However, comps overall increased 20% as in-store spending made a big comeback.

With its best-in-breed hybrid selling model, Best Buy believes it's in superb shape going forward. Not only is this a top e-commerce business offering multiple ways for shoppers to receive their orders, Best Buy has more customers than ever as consumer behavior has been permanently altered by the pandemic. At-home entertainment (such as TV streaming and video games) and remote work are here to stay, creating a new hardware upgrade cycle and a new base of users that will need home office and personal devices for years to come.

Texas Roadhouse: Turning the page on a new chapter

Few segments of retail were dealt a more difficult hand by COVID-19 than the restaurant industry. Texas Roadhouse, with its focus on rural and suburban markets, has fared better than average, but the company and shareholders received some extra sad news this past spring: the passing of CEO and founder Wayne Kent Taylor.

The company is thus starting a new chapter on multiple fronts. But the in-demand dining experience Taylor established and built over the last three decades is an enduring growth story -- and in many ways it's an "antifragile" one (that is, it's gotten stronger from being under stress). Before the pandemic, some of the busiest Texas Roadhouse locations were bumping up against max dining room capacity. To-go, online orders, and delivery had historically never been significant channels for the company, but all that changed. To-go sales made up nearly 17% of the total in the fiscal second quarter.

As a result, Texas Roadhouse comps were up 21% on a two-year basis. Add in slow and steady expansion of its store base, and this is a top story to follow in the casual table-service restaurant industry as it benefits from its newfound online and to-go business. Total revenue through the first half of fiscal 2021 was up 23% from the same period in 2019, and earnings per share were up 50%. Texas Roadhouse also boasts an incredibly strong balance sheet. It ended June with $483 million in cash and equivalents, offset by debt of only $190 million.

With remote work now established as a mainstay for many people, migration from more crowded urban centers to the suburbs could be an ongoing theme in the U.S. for years to come. With its restaurants set to enjoy an influx of potential new patrons because of this trend, a new to-go business to complement its dining room experience, and a dividend yielding 1.7%, this is one great restaurant stock for the digital age.

Best Buy Is Shrinking: Time to Sell the Stock?
351%