Investors are pricing in too much of the recent noise, ignoring this PC and printer company's respected name and track record.

There's no denying last quarter wasn't a great one for computer maker HP (HPQ -3.08%). The company's top line improved 7% year over year, but it fell short of the revenue figure analysts were looking for.

CEO Enrique Lores assured shareholders, "We are selling everything we can produce." But with a global chip shortage still in effect, HP simply can't produce enough PCs to meet current demand. The stock stumbled when investors were brought face-to-face with this reality last  Friday. 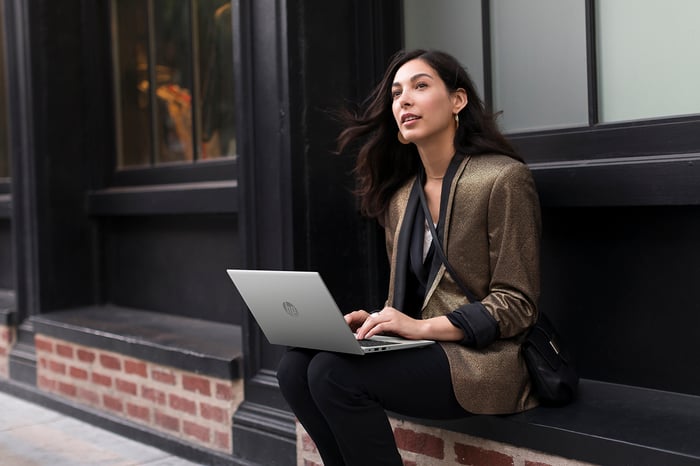 However, a bit of perspective is in order. Last quarter does not represent the norm for this company. While the personal computer industry will probably never rekindle its glory days of the late 1990s and early 2000s, it's likely to stabilize and hold steady at least through 2025. It'll certainly be firm enough to support HP's above-average dividend in the meantime, and that might just buy the company enough time to come up with something really cool to drive good growth again.

For the record, HP turned $15.3 billion worth of revenue into a per-share profit of $0.92 during the third quarter, which ends in July. That top line is 7% better than the COVID-19-crimped year-ago comparison of $14.3 billion when the company earned $0.52 per share. But while analysts were modeling profits of only $0.84 per share, they were also looking for sales of a little over $15.9 billion. And all of that growth came from printing. PC sales, which account for roughly two-thirds of the company's revenue, were effectively even with the third quarter in 2020. Supply chains clearly remain disrupted, weighing on overall sales.

Be wary, however, of becoming a victim of what psychologists call the recency effect, or the tendency to remember only the most recent data at the expense of older (and perhaps more relevant) information.

In this case, the recency effect could lead investors to believe last quarter's lackluster PC sales from HP represent the company's past and probable future. The future actually looks much brighter.

That's not a self-serving call from HP, either. Rather, the optimism comes from technology-market researcher International Data Corp. IDC estimates firm sales growth in the latter half of this year will translate into full-year PC unit sales growth of 14.2% in 2021. Although that pace is expected to cool to a more modest annualized clip of 3.2% for the five-year span between 2021 and 2025, it's still growing. Notebooks (or laptops) are projected to lead the way, followed by desktops. Tablet sales are likely to shrink quite a bit beginning in 2022.

OK, it's not a thrilling outlook. But it's an undercurrent that HP should be able to tap into.

Analysts certainly think that's the case anyway, although they might be underestimating the company's potential to win at least its fair share of the slow-growing market.

The chart below tells the tale. HP is projected to work its way out of the pandemic-prompted revenue slump, but sales are expected to level off in 2023. Earnings should continue to improve through 2023, although at a snail's pace. 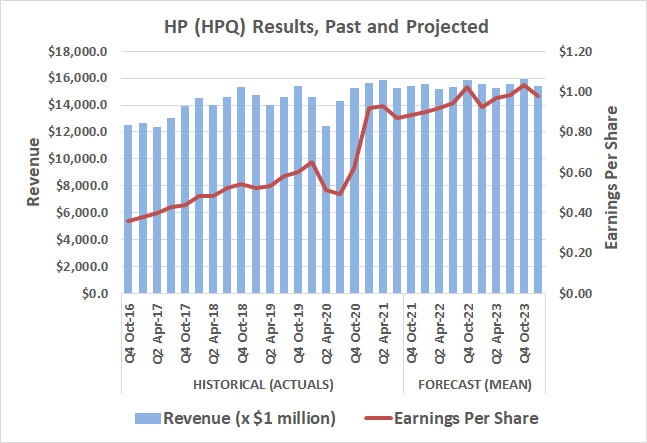 It's arguably a conservative outlook, though, in light of the company's proven capacity to connect with prospective buyers.

Case in point: HP mustered revenue growth between 2016 and 2019, a time when PC sales were merely leveling off after a multiyear decline, leveraging its respected name and pricing power to gain market share. Another tech market researcher, Gartner, estimates HP's personal-computer market share grew from 18.3% in 2015 to 22.1% in pre-pandemic 2019. It's not a huge shift, but it's a huge sign of HP's brand power given the lethargic market environment during this period.

Perhaps the bigger and better bullish argument for owning HP right now, however, is that the market expects little to nothing from the stock. The trailing price-to-earnings ratio currently stands at 9.4, while the forward-looking version of the same measure is 8. For comparison, the S&P 500 is presently priced at 31.3 times its trailing earnings, and 22.3 times its anticipated earnings. HP's ultra-low valuation suggests investors don't see much upside for HPQ shares. That doesn't make them right, though. It might simply mean the crowd doesn't see IDC's outlook or remember HP's track record.

Not exciting, but smart

A low P/E doesn't inherently make a stock a worthy buy. As the adage goes, some stocks are cheap for a reason. Investors can generally expect to pay up for quality.

On the other hand, it's certainly not unheard of for the trading crowd to draw conclusions that just aren't rooted in the facts. That's arguably what's happening with HP here, with chip shortage headlines still circulating en masse. The stock's risk-versus-reward profile is pretty compelling as-is when taking supply chain woes out of the picture, which we'll eventually be able to do. The kicker is the dividend yield of 2.7% newcomers will be plugging into -- a dividend that, by the way, has only consumed about 20% of the year-to-date profits. That's a huge cushion, but also leaves plenty of cash to invest in growth.

Bottom line? This stock is worth scooping up while it's still down around 20% from May's peak.