The company's second-quarter results were strong, and management boosted its guidance despite COVID-19.

Reporting its fiscal second-quarter results on Aug. 31, apparel company PVH Corp (PVH -0.80%), once known as the Phillips-Van Heusen Corporation, revealed revenue and earnings that topped analysts' estimates. The enterprise, which owns or licenses world-famous brands such as Calvin Klein, Tommy Hilfiger, Michael Kors, and Kenneth Cole New York, is outperforming pre-pandemic results from 2019, and management forecasts better-than-expected results for the full year. Three signs point to this optimism being justified.

1. The company is outpacing even its own expectations

Rebounding at lightning speed from the lows brought about by COVID-19 lockdowns, PVH surprised not only Wall Street but its own executives with the strength of its recovery. Fiscal second-quarter revenue increased 46% year over year, though that figure was still approximately 2% short of revenue from the same quarter in 2019. Adjusted earnings per share (EPS) soared more than 20-fold from $0.13 to $2.72 year over year. That bottom-line result also far exceeded management's previous guidance for adjusted earnings of just $1.15 to $1.18 per share. 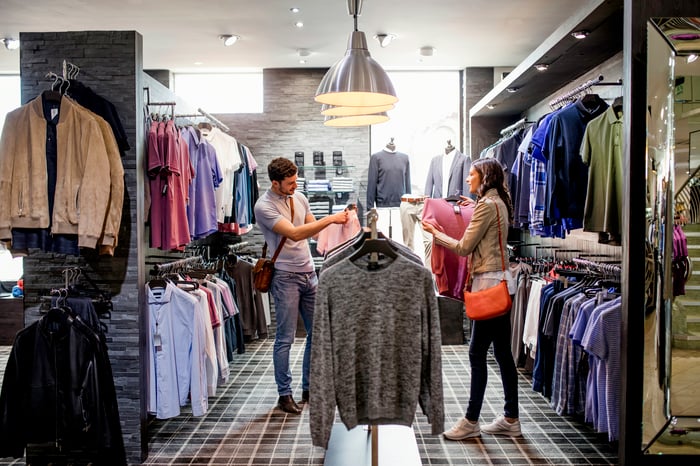 The gains aren't accidental, according to CEO Stefan Larsson, who said the success was "driven by disciplined execution of our key strategic priorities, led by Calvin Klein and TOMMY HILFIGER and our international markets." He also noted growth was "super-charged by e-commerce," and the company's "international performance was particularly strong," outpacing pre-pandemic results.

In light of this strength, PVH raised its guidance for full-year fiscal 2021. Adjusted EPS, previously pegged at $6.50 for the year, is now expected to reach $8.50. The company also continues to pare down less successful brands and intellectual property. It completed the sale of Heritage Brands to privately-held Authentic Brands Group in August, bolstering its already strong cash position with another $223 million.

Though the spin-off closed after the second-quarter ended, the recent earnings report indicates $200 million of the sale proceeds will go toward share repurchases, reducing dilution and boosting stock value for shareholders.

2. It's improving both its margins and debt position

Thanks in part to a 35% rise in digital revenue (though physical retail sales are also growing and pricing is favorable), margins are also rising for the company. These results are "driven by pricing power, lower promotions, and higher retail productivity," according to Larsson's comments from the earnings call. Gross margin was 57.7% in the quarter, up from both 2020 and 2019, providing concrete evidence PVH's strategies are boosting its performance.

The company is flush with cash, and it used some of its reserves to pay off debt. PVH deleveraged by an additional $200 million in the latest quarter, bringing the total debt payoff in the first half of fiscal 2021 to $700 million. This, the company says, is enough to offset its borrowing from last year. Net interest expense is expected to drop from $121 million in 2020 to $105 million for 2021. With these latest moves, PVH has freed itself from most of 2020's lingering effects on future performance, and it doesn't have the excess debt burden many other companies are still struggling with in the wake of COVID-19.

3. It seems to be taking supply chain difficulties and COVID-19 in stride

In its press release, PVH notes its upbeat guidance is "despite" the uncertainty around COVID-19's effects during the second half of the fiscal year. The company is investing heavily in further developing its digital business, and it expects this to both make operations more efficient, counteracting problems around raw material price increases and the supply chain, and to further reduce costs.

Corporate controller Jim Holmes said during the earnings call PVH is "experiencing supply chain delays of four to six weeks" but added the company expects "inventory levels pretty much to get back in line with future sales growth projections" by late 2021. Inventories were down 13% year over year for the quarter, mirroring the healthy sales.

Overall, PVH looks like it has shaken off many of the challenges from the past year. With strong revenue, plenty of cash, and a strategy in place, investors should be bullish on this leader in the apparel industry.

Why PVH Stock Triumphed on Thursday

Why PVH Stock Jumped on Wednesday
376%