Their businesses don't deal with the marijuana plant directly, so they can freely expand and grow across the country.

Cannabis stocks have been struggling over the past six months, with the Horizons Marijuana Life Sciences ETF down more than 30% while the S&P 500 has risen by 17%. Though optimism was high when the Democrats took control of the Senate earlier this year, a lack of progress with respect to the federal legalization of marijuana may have led investors to look for other near-term growth opportunities instead. Although the majority of Americans are in favor of legalizing pot federally, it still could take years before that happens.

But there are some cannabis stocks that can do well even if the U.S. government doesn't legalize marijuana anytime soon. Pick-and-shovel plays like Agrify (AGFY -0.96%) and Scotts Miracle-Gro (SMG 0.94%) aren't plant-touching businesses, so they don't need legalization to expand and grow throughout the country. And as more states legalize marijuana use, that will open up more opportunities for these companies, regardless of what happens with marijuana at the federal level. 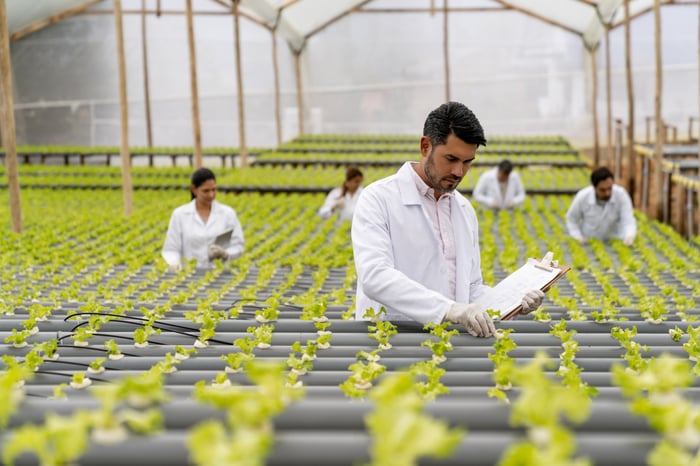 Agrify provides premium grow solutions that can help cannabis producers improve efficiency and get the most out of their products. In an industry where many businesses are still incurring losses, those solutions could be in high demand. Specifically, the company's vertical farming units (VFUs) allow a producer to grow plants in a vertical arrangement, which can save significant space that translates into cost savings. For cannabis businesses that may be intimidated by the need for large greenhouse operations, an efficient solution involving VFUs can make it easier to get started.

Today, Agrify is still a business in its early growth stages, but if its VFUs prove to be the real deal, this could be an incredibly promising growth stock to own. Agrify posted its second-quarter results Aug. 12, and sales of $11.8 million for the period ending June 30 were more than triple the revenue it generated in the prior-year period. Management anticipates that sales could top $50 million in 2021. That would be more than four times the $12 million in revenue it reported in 2020.

Although the company remains in the red and will likely continue to generate losses, the business is in good shape to continue growing regardless. As of the end of Q2, Agrify had $79.8 million in cash and cash equivalents -- far in excess of the $13.8 million it burned through in its operating activities over the past six months.

There's some risk with Agrify in how popular its VFUs will end up being with cannabis producers, but this is a stock that investors should certainly keep a close eye on.

A safer pick-and-shovel play for cannabis investors is hydroponics and gardening company Scotts Miracle-Gro. Like Agrify, Scotts can help cannabis producers with their growing operations. Through the use of hydroponics, which involves a system of pumps and pipes that require no soil, companies can save on space and eliminate the need for a complex greenhouse to grow their crops. The cannabis part of Scotts' business falls under its Hawthorne Gardening Company subsidiary; meanwhile, its largest operating unit is its U.S. consumer segment, which offers traditional gardening tools and supplies. That gives investors a safe and reliable business to fall back on, plus the opportunity to cash in from growth in the cannabis sector.

And Scotts is diving even deeper into cannabis with last month's announcement of a new subsidiary, The Hawthorne Collective, "which will focus on strategic minority investments in areas of the cannabis industry not currently pursued by The Hawthorne Gardening Company." Scotts is banking on the expertise it has developed in running Hawthorne Gardening for several years to identify investment opportunities in the cannabis sector. Given the company's exceptional results, it's easy to see why management feels comfortable diverting some of its money to new investment opportunities; for the trailing 12 months, Scotts has generated free cash flow of $210 million. And its cash from operating activities has totaled $308 million -- many cannabis producers struggle to stay cash flow positive.

The new investment subsidiary will open up more opportunities, but it's not as if the overall business is struggling to grow. For the period ending July 3, Hawthorne Gardening's sales of $421.9 million grew at a rate of 48% year over year. The U.S. consumer segment (the lawn and garden business), which still accounts for the majority of Scotts' revenue at just over $1 billion, was down 4% -- but it went up against some tough comparables during the early stages of the pandemic, having hit record levels last year. Overall, the company's net income remained strong at $225.9 million, up more than 11% from the same period last year.

For investors who want a safer option to invest in the cannabis industry, Scotts is an easy choice. And with its shares falling 27% in the past six months for no discernible reason besides bearishness in the marijuana sector, now may be a great time to pick up the stock at a reduced price.