Please ensure Javascript is enabled for purposes of website accessibility
Log In Help Join The Motley Fool
Free Article Join Over 1 Million Premium Members And Get More In-Depth Stock Guidance and Research
By Zhiyuan Sun – Sep 14, 2021 at 8:00AM

Investors are pretty euphoric about Solana -- will it continue to rise?

Decentralized finance (DeFi) token Solana (SOL -0.68%) is flying to the sun with a monstrous rally of 10,200% year to date. But unlike the ancient Greek mythical hero Icarus, Solana holders aren't getting burned, as there have been very few corrections during this monstrous rally.

Developers behind the idea designed the Solana protocol to build decentralized applications (dapps). Due to its unique features that allow concurrent transactions, the network can handle as many as 50,000 transactions per second, much faster than Ethereum (CRYPTO: ETH) network's 30 per second. As a result, Solana can host a wide variety of dapps on its infrastructure. On a side note, the number of smart contracts executed on Ethereum amounted to 4,920 in the past 24 hours, for a total transaction volume of $311.4 million. So can Solana one day disrupt Ethereum and become the world's top DeFi network? 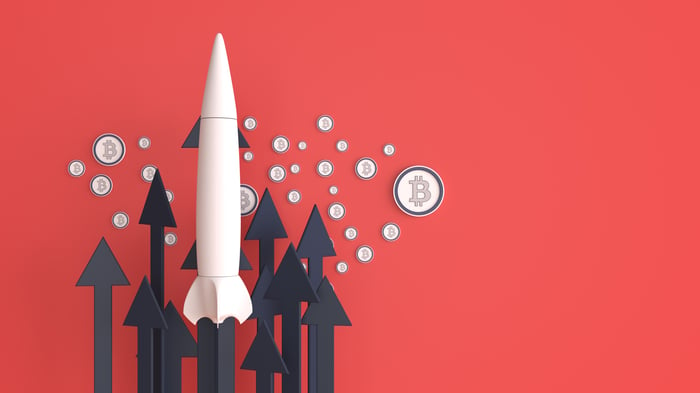 Earlier this month, blockchain streaming platform Audius announced it would be showcasing non-fungible tokens on the Solana Library to more than 6 million users and 100,000 artists. Audius sees $60 million of NFT trading volume on its platform alone each week. What's more, it is also using Solana to scale its infrastructure. Due to the development, it takes less than one minute for Audius users to upload their favorite tracks onto TikTok to create videos. That's not all; FTX, the four-largest cryptocurrency exchange globally, is also creating a marketplace to enable creators to trade their NFTs cross-chain between the Ethereum and Solana networks.

What's more, last month, Solana integrated Chainlink and Aleph.im onto its network. Through Chainlink, dapp users on the Solana blockchain would be able to link real-world data feeds like asset prices or weather patterns into smart contract execution. Simultaneously, Aleph.im enables Solana developers to tabulate data such as token swaps, trading volume, for use on its decentralized exchanges (DEX).

Finally, Solana is one of the blockchains selected by Visa for the payment provider to integrate cryptocurrency transactions. Over 70 million Visa merchants will soon be able to accept stablecoins  like USD Coin as payment via the Solana network as an intermediary.

Can the hype last?

But it's clear that all this progress has been baked into the token's price, and then some. Right now, SOL's market cap is approaching $50 billion. There are currently 339 dapps on the Solana blockchain, but most of them are still in development. That's tiny compared with over 2,845 dapps on the Ethereum network that are already in the commercialization phase.

It doesn't take a great deal of knowledge to buy into cryptocurrencies, but it sure takes a lot of brainpower to know when to cash out. Right now, Solana is fast approaching euphoria territory. Hence, it's best to wait until the value of projects catches up before buying. Now is a good time for early investors to cash out.

Why ApeCoin Is Popping While Solana and Binance Coin Are Dropping

Here's Why I Just Bought This Bitcoin Alternative
351%