Please ensure Javascript is enabled for purposes of website accessibility
Log In Help Join The Motley Fool
Free Article Join Over 1 Million Premium Members And Get More In-Depth Stock Guidance and Research
By Howard Smith – Sep 14, 2021 at 10:30AM

Past performance can certainly be worth studying to assess the potential ahead.

"Buy low, sell high" is a phrase every investor has heard. It's good advice, but things are a bit more complicated when the goal is to grow wealth to a level that allows for a secure and comfortable retirement. Long-term planning doesn't necessarily require you to wait for a stock to drop or for a general market downturn. That makes sense for trades, but not necessarily for true wealth-building investments.

One name that has given long-term investors significant returns is mega-retailer Target (TGT -0.02%). Even when the stock price seemed high at the time, it has eventually worked out well for stockholders. Let's see if now is one of those times where that strategy can pay off again. 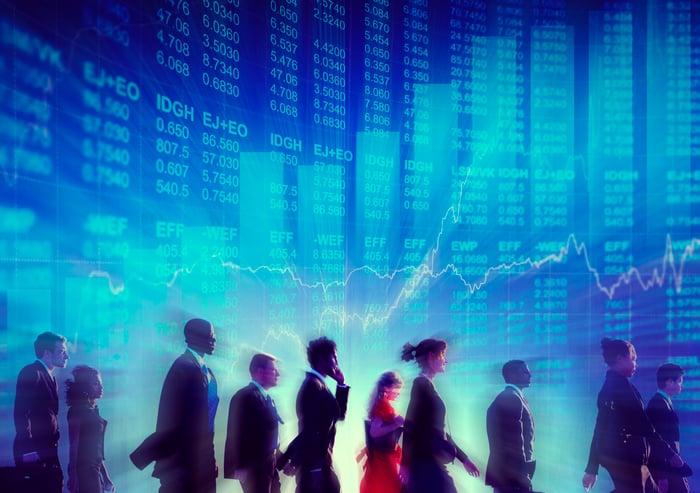 As the disclaimer goes, past performance is not a guarantee of future results. But the past performance of Target stock has been impressive. Here's a 20-year chart showing its returns vs. the S&P 500 Index, including dividends. 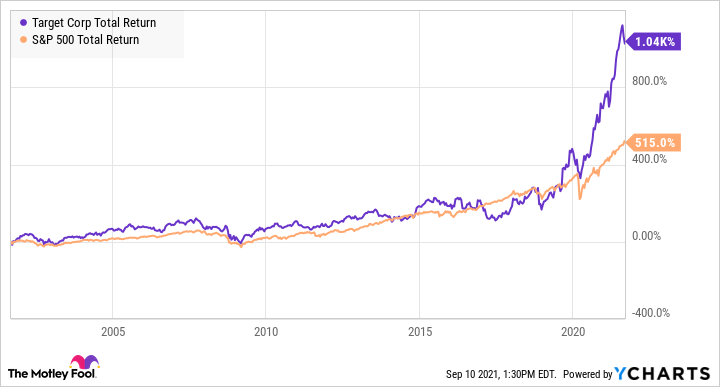 While it may look as if recent outperformance is a result of the pandemic, Target stock did just fine before the start of 2020. The chart below shows the stock's return through the end of 2019. 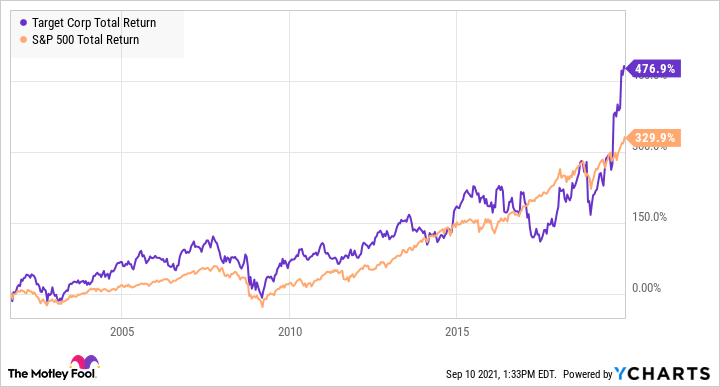 What's notable is that timing the entry point was not an important factor in achieving significant returns. Investors who bought at the high in mid-2007 experienced more than a 50% decline during the Great Recession of 2008-2009. Target stock experienced another drop of more than 30% from late 2016 to mid-2017. Yet investors who bought at that latter peak still more than doubled the index's returns if they continued to hold shares until today.

So what could propel Target's stock higher from here? In short, online shopping. Target has been working on growing this sales channel for years. It acquired Shipt, a platform for same-day delivery service, in 2017. As a result, online sales using same-day services nearly doubled in 2019. The pandemic in 2020 accelerated that growth still further with comparable digital sales soaring 145% over 2019's levels. In the company's recent earnings conference call, Target CEO Brian Cornell told investors, "Same-day services now account for well over half of our digital sales."

Impressively, management believes it can still grow year-over-year sales beyond the recent, pandemic-influenced highs. For the second half of 2021, the company says it expects high single-digit growth in comparable sales. The year is already off to a good start. For the second quarter ended July 31, comparable sales grew almost 9% year over year while revenue from just the digital channel grew by 10%.

Target is demonstrating confidence in other ways as well. In its second-quarter earnings release, the company announced that its board had approved a new $15 billion share repurchase program. And in June, the company declared that it will increase its base dividend by 32%, marking the 50th consecutive year the retailer has raised its dividend. So at the end of the calendar year, Target will officially become a member of the elite list of Dividend Kings.

Target had the foresight to develop its digital sales infrastructure well before the pandemic exploited that advantage. The company's future looks bright, and buying shares at past peaks has worked out well for long-term investors. Doing so now probably won't be any different.