Which Japanese gaming giant is the better all-around investment?

Nintendo (NTDOY 0.19%) and Sony (SONY -0.70%) are two of the world's most well-known video game companies. Nintendo has produced market-leading gaming consoles for nearly four decades, as well as first-party games featuring iconic characters like Mario. Sony became a gaming giant after it launched its first PlayStation, which was originally intended to be a collaborative project with Nintendo, in 1994.

Both Japanese companies remain far ahead of Microsoft (MSFT -0.46%), which has shipped 50.4 million Xbox Ones since 2013 and 6.9 million Xbox Series S and X consoles since last November. But is Nintendo or Sony the better all-around video game stock? 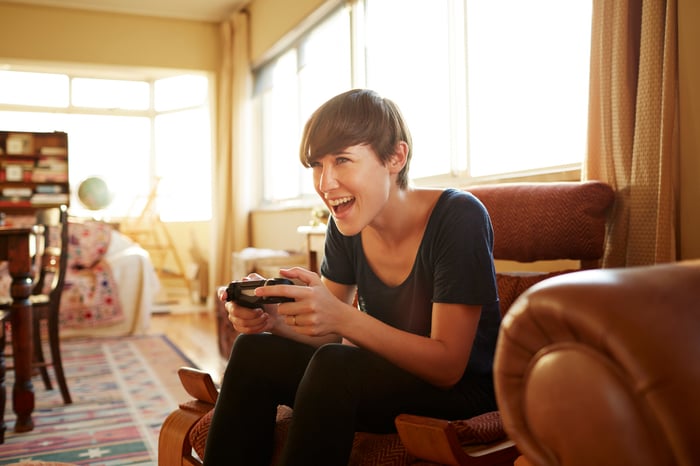 Nintendo generated 96% of its revenue from its Switch consoles, games, and related products last quarter. The remaining 4% came from its mobile gaming, IP licensing, and playing card businesses.

Sony is a larger and more diversified conglomerate, and generated 27% of its revenue from its gaming and network services (G&NS) business last quarter. Sony Music, which generated 11% of its revenue, also houses its smaller mobile gaming and anime businesses.

The rest of Sony's revenue came from its Electronics Products & Solutions business, which sells its consumer electronics and mobile devices; its Imaging & Sensing Solutions business, which mainly sells image sensors for cameras and smartphones; its Financial Services division, which sells investment and insurance products; and Sony Pictures, which produces TV shows and movies.

Therefore, investors seeking a "pure play" on gaming will likely favor Nintendo, while those looking for a more diversified company that generates significant growth from the gaming sector will prefer Sony.

But in the first quarter of fiscal 2021, Nintendo's revenue declined 10% year over year as its net profit fell 13%. It attributed that slowdown to tough comparisons to its stronger sales during the pandemic last year, as well as its launch of the tremendously popular Animal Crossing: New Horizons last March. The ongoing chip shortage is exacerbating that pain by crunching its supply of new Switch consoles.

For the full year, Nintendo expects its revenue and net profit to decline 9% and 29%, respectively. The upcoming launch of its new Switch OLED model alongside the eagerly anticipated Metroid Dread in October could cushion the blow, but Nintendo's growth probably won't accelerate significantly until it launches a true successor to the aging Switch.

Sony's revenue rose 9% in fiscal 2020, which also ended in March, as the growth of its gaming, music, and financial businesses during the pandemic offset the declines across its consumer electronics, image sensors, and Sony Pictures businesses. Its net profit increased 101% as it focused on cutting costs across its weaker and pandemic-stricken divisions.

In the first quarter of 2021, Sony's revenue and net profit rose 15% and 9%, respectively. All of its core businesses, except for Financial Services, generated year-over-year sales growth as the pandemic-related headwinds waned. Its G&NS revenue only rose 2% year over year -- due to a tough comparison to higher PS4 sales during the pandemic and chip shortages disrupting its PS5 shipments -- but its growth should accelerate as it gradually resolves its component shortages.

For the full year, Sony expects its revenue and net profit to rise 8% and 6%, respectively. It expects all of its businesses, except for Financial Services again, to continue growing throughout the year. Sony Pictures will likely generate the strongest year-over-year growth as more movie theaters reopen.

Based on these facts, Sony not only looks like the better gaming stock, but it also looks like the better all-around investment. Nintendo's stock could perk up in the future, but it needs to either beat its own downbeat estimates, launch more hit games, or reveal a brand new console to bring back the bulls.