Market-battered Sunrun looks undervalued as it promises a "break-out year."

Sunrun (RUN -4.54%), a home solar, battery storage, and energy services company, has lost more than half its value since reaching itsall-time high in January -- but it looks like the company's cloudy days may be over.

The renewable energy industry has grown substantially since 2016, and that trajectory is expected to continue for decades to come. By 2020, renewables made up 21% of the electricity generated in the United States, according to the U.S. Energy Information Adminstration. The agency projects that percentage will rise to 42% by 2050, driven largely by solar and wind. 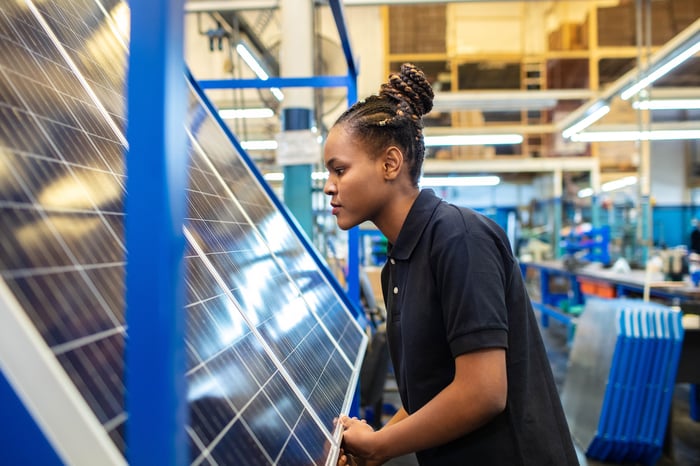 Amid this growing trend, Sunrun, founded in 2007, is posting impressive growth. Its second-quarter revenues were up 121% year over year, beating expectations from analysts who follow the company. And Sunrun's CEO is predicting a "break-out year," telling investors to expect full-year growth of 30%.

Sunrun has taken some blows from a pandemic-stricken economy, as well as investors' expectations that solar tax credits would expire. But the economy is now on the mend, and the Trump administration extended renewable energy credits through 2022. The Biden administration, given its commitment to fight climate change, could extend them further.

On the negative side, Sunrun is not turning a profit, and in the second quarter its losses widened. It reported a net loss attributed to common shareholders of $41.2 million, or $0.20 per share, up from about $13.6 million, or $0.11, in the same quarter last year. Sales and marketing costs, as well as interest expenses, drove much of the losses, as the company pushed to grow its customer base with an eye toward future profits.

And while it may be a leader in the U.S. residential solar industry, that's a crowded segment. With the exception of Tesla Energy, Sunrun mostly competes against privately held home-solar installation companies. And its total market share is only about 15%.

That's more than twice the size of its nearest competitor after Sunrun acquired the No. 2 player, Vivnt, last year, but it doesn't make for much of an economic moat. Many of its competitors could potentially rise to take the lead in market share through mergers or more capital financing.

Another caution: Sunrun may fail to achieve the synergies it expects from its recent merger with Vivint, or its strategy to manage cash flow could falter. The company runs on financing and cash flow, including annual recurring revenue of $747 million from contracts with an average duration of 17.2 years.

A money-losing solar company with huge growth potential and some guaranteed revenue is difficult to value. Argus analysts calculate a price-to-earnings ratio of 20 for Sunrun, lower than many P/Es among its profitable rivals. And Sunrun's price-to-book value is 1.4, compared to an average of 2.7 among its closest competitors, according to S&P Capital Intelligence.

Investors will have to bet on company's growth potential -- and in an epoch of rising storm-related power outages, Sunrun's management is looking at all the homes that don't have panels on their roofs or batteries on their walls. Management notes that only 3.5% of 77 million homes have solar in a U.S. residential electricity market worth more than $187 billion.

Buying Vivint made Sunrun the largest player in its field, and gave the company a broader reach into the residential market than its competitors. Taking market share and achieving greater scale also increases its ability to control costs, which could make Sunrun a more price competitive company.

Today, the stock carries a cheap price relative to the company's potential, and at least one thing is all but certain: The sun will come out tomorrow.