The stock market looked poised to close the week on a down note today. Even the Nasdaq Composite (^IXIC -0.59%), which has been an outperformer lately, found itself down three-quarters of a percent as of 12:30 p.m. EDT on Friday.

Most investors are excited when a company whose shares they own gets an offer to get taken over. Such buyout bids usually come with a nice premium to where the stock traded immediately prior to the news, and that can mean a quick payday for shareholders.

However, an acquisition bid also means that the fortunes of the target are tied to those of the buyer, and sometimes that doesn't lead to the best results for investors. That's something that shareholders in Five9 (FIVN -0.97%) are learning the hard way, and now, it looks increasingly possible that its deal with video collaboration giant Zoom Video Communications (ZM -1.43%) might well not go through.

History of the deal

Two months ago, Five9's stock moved higher after Zoom announced that it had come to an agreement to acquire the call-center platform specialist. Under the terms of the deal, Zoom would pay roughly $14.7 billion in an all-stock transaction that would give Five9 shareholders 0.5533 shares of Zoom stock for every Five9 share.

There were ample business reasons for Zoom to seek the acquisition. Zoom's growth from its core videoconferencing business was decelerating after a huge performance in 2020, and the company wanted to branch out into other adjacent areas. Five9's call center business was a natural fit, and Zoom saw call centers as a $24 billion market opportunity worth pursuing. 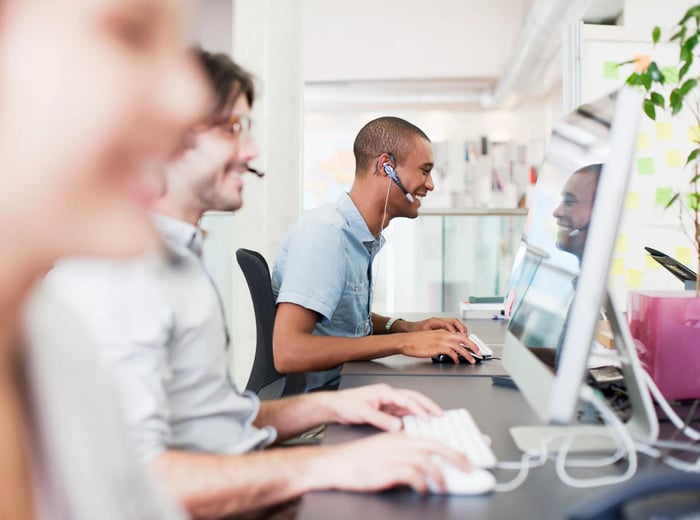 For Five9's part, connecting with Zoom offered the opportunity to give Five9's customers more complete access to the features that Zoom's video collaboration platform offered. In particular, the Zoom Phone product could grow into a superior service that Five9's clients would be interested in pursuing.

Since then, though, things haven't gone well for Five9 shareholders. To be clear, Five9's business has done very well, with sales in its most recent quarter rising 44% powered by a 50% rise in subscription revenue from its enterprise customers. But because of the deal, Five9's stock has tracked Zoom's share price lower, and Zoom has been under pressure as growth for the video giant has slowed even further.

Meanwhile, many companies in the software-as-a-service space  have continued to move higher. That adds insult to injury for Five9 investors who thought they were getting a good deal by joining forces with Zoom.

Coming to a head

But there might be a way out. Five9 shareholders have to approve the deal, and although shareholder votes are usually rubber stamps for management, proxy advisory specialist Institutional Shareholder Services took the unusual step of recommending against the merger. ISS argued that the all-stock deal forces Five9 investors to take on a core Zoom business that it characterized as having "growth prospects [that] have become less compelling" as the pandemic hopefully approaches an end.

The ISS move doesn't guarantee the deal will fail, though. Five9 has significant institutional ownership, and many institutions choose almost always to side with management in agreeing to deals. Nevertheless, some institutional investors rely heavily on services like ISS, and if similar proxy advisory companies agree with ISS, it could jeopardize the deal or prompt a higher bid.

The vote is currently scheduled for Sept. 30. A new bid would potentially reset that timeline, and so it'll be interesting to see what happens in the coming days and what it means for both stocks.

Shareholders Wish This Nasdaq Stock Never Agreed to a Buyout
351%