All three are riding major trends.

"The trend is your friend."

You've probably heard the investing adage before. It's typically used in reference to buying stocks that are in defined upswings.

However, there's an even more important application of the saying for long-term investors. Some broader trends that aren't related to a stock chart nonetheless have the potential to create massive tailwinds for certain stocks.

Identifying such trends and buying shares of the corresponding market leaders offers an opportunity to make tremendous returns over time. Here are three unstoppable growth stocks to invest $500 in right now. 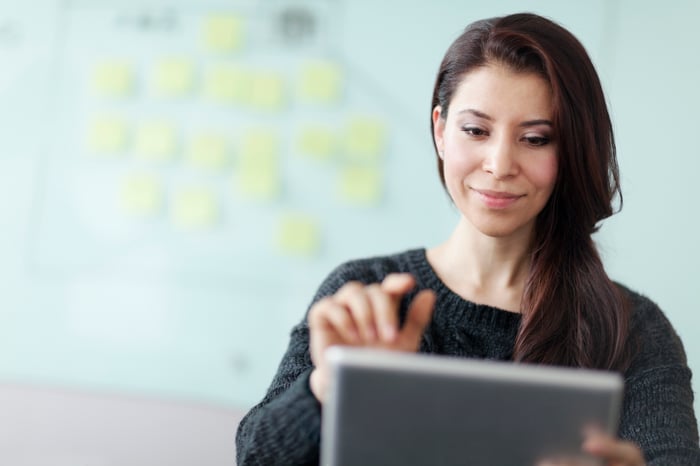 Arguably no trend could affect our world as much as the adoption of artificial intelligence (AI). The technology is already becoming pervasive in businesses and homes. Nvidia (NVDA 1.25%) ranks as one of the best AI stocks that you can buy right now.

Nvidia's graphics processing units (GPUs) are used extensively in data centers to power AI applications. The company generated $2.37 billion in data center revenue in the second quarter, roughly 36% of its total revenue. Its momentum in this arena could accelerate.

Another application of AI isn't a huge revenue source for Nvidia yet. However, it could be the company's next big thing. Nvidia recorded sales of $152 million in Q2 for its automotive unit, which develops AI technology for self-driving vehicles. The autonomous driving market is still only in its really early innings. Look for Nvidia's automotive platform to become a much more important growth driver over the next few years.

Of course, gaming is the main trend that has fueled Nvidia's remarkable rise. The next gaming frontier for the company could be the Omniverse, a virtual reality metaverse that goes beyond gaming. Nvidia CEO Jensen Huang recently predicted that the Omniverse and the metaverse will "be a new economy that is larger than our current economy." And Nvidia is well-positioned to be a leader in it.

The adoption of digital payments stands out as another important trend that continues to gain steam. Several companies are profiting and will profit from this trend. You can put Square (SQ 2.07%) high on the list.

For years, Square was best known for its seller ecosystem. The company's payments processing platform is especially popular with small businesses. Square has steadily made inroads with larger businesses, though. It has also expanded its offerings for sellers to the point that its ecosystem is very sticky.

Today, Square is just as widely known for Cash App. The fast-growing platform supports transferring money plus buying stocks and Bitcoin. In Q2, Cash App generated nearly as much gross profit for Square as its seller ecosystem did.

The stock might seem super-expensive with shares trading at 119 times expected earnings. However, Square's opportunity makes it worth the price. The company is targeting a $160 billion market. Its current market cap is less than $120 billion.

There's another trend that you might not hear as much about. Pet ownership is rising. The COVID-19 pandemic is providing an added catalyst as more people work from home (and can spend more time with their pets). One top beneficiary of this trend is Trupanion (TRUP 0.11%).

Trupanion ranks as the leading provider of medical insurance for cats and dogs in North America. The company insures more than 1 million pets in the U.S. and Canada.

Other companies also compete in the pet insurance market. However, Trupanion has a big competitive advantage with its software that supports paying veterinarians within minutes of checkout.

Currently, only around 1% of pets in the U.S. and 2% of pets in Canada are covered by insurance. Market penetration is much higher in Europe. As the North American market expands, Trupanion should be a big winner.