PayPal (NASDAQ:PYPL) dropped by close to 2.5% in Monday trading amid a generalized sell-off. Since its spinoff from eBay (NASDAQ:EBAY) in 2015, the fintech's stock price has surged more than 625% amid the rising prevalence of financial technology, even after a 13% drop from highs set earlier this year.

Financial technology is vast in scope, and has already attracted numerous PayPal competitors to the field. But it may be this new decline that leads investors to ask whether the falling stock price is a reason to sell or a buying opportunity. 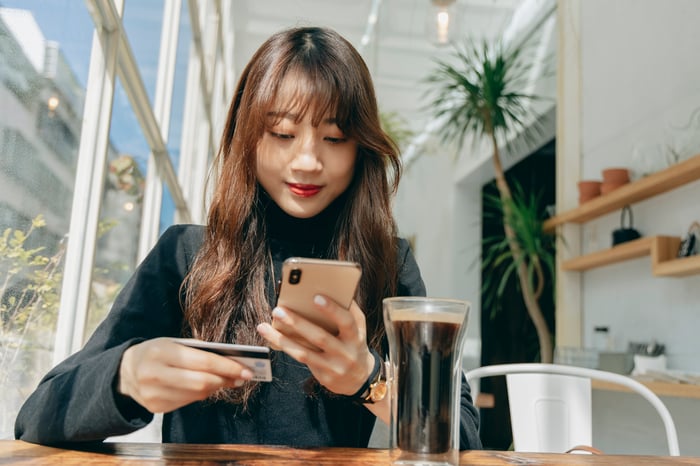 The state of PayPal

While the slight drop in the stock on Monday may have piqued the attention of a few worrisome investors, they can't deny the strength of PayPal's growth story. PayPal led the way for the fintech industry in the 1990s, allowing users to make payments from their computers.

Despite this longtime presence, the company could easily continue its expansion for the foreseeable future; Grand View Research forecasts a compound annual growth rate (CAGR) for global fintech of 19% through 2028. This will take the size of the industry to an estimated $236 billion globally. As societies go cashless, sites like PayPal have offered more services, increasing options for making payments electronically.

Additionally, Venmo, PayPal's peer-to-peer payments app, has become an increasingly popular option that allows users to spend and collect money, performing transactions with individuals and businesses without needing a wallet or a credit card. And PayPal just bought Paidy, a Japanese buy-now, pay-later (BNPL) company, for $2.7 billion. Paidy is the leader in BNPL in Japan, which has the third largest e-commerce economy in the world.

However, while PayPal went into BNPL before Square (NYSE:SQ), in areas like crypto and app-linked cards, PayPal seems to merely react to this peer's moves. Square's ecosystem, which now includes an industrial bank, poses an increasingly serious threat, as many businesses can now conduct all the necessary financial transactions inside the Square ecosystem. Currently, PayPal does not offer traditional banking services. Hence, it would require businesses to link an external account in order to move money outside of the Venmo or PayPal ecosystems.

PayPal's presence in 200 countries means only so much given that in developing nations, many people do not use credit or debit cards. This makes PayPal inaccessible to many in cash-based societies. In such countries, PayPal operates at a disadvantage to a company like MercadoLibre (NASDAQ:MELI), which offers services that allow cash-only customers to access fintech services.

PayPal cashes in on fintech

So far, PayPal's challenges do not seem to have slowed growth. For the first six months of 2021, revenue of $12.3 billion surged 24% compared with the first half of 2020. Over the same period, net income rose 41% to $2.3 billion as expenses climbed by only 18% and PayPal received an income tax benefit in Q1. This made up for lower net gains on investments that reduced other income by 92%.

For fiscal 2021, the company expects revenue of nearly $26 billion, which would amount to an increase of nearly 20% versus fiscal 2020. Still, PayPal began to drop following this announcement as investors reacted negatively to eBay's shift away from the PayPal platform. Nonetheless, While PayPal stock has surged by more than 50% over the last 12 months, it's P/E ratio has fallen to around 65, closer to pre-pandemic levels. Meanwhile, Square shares trade for almost 220 times earnings. 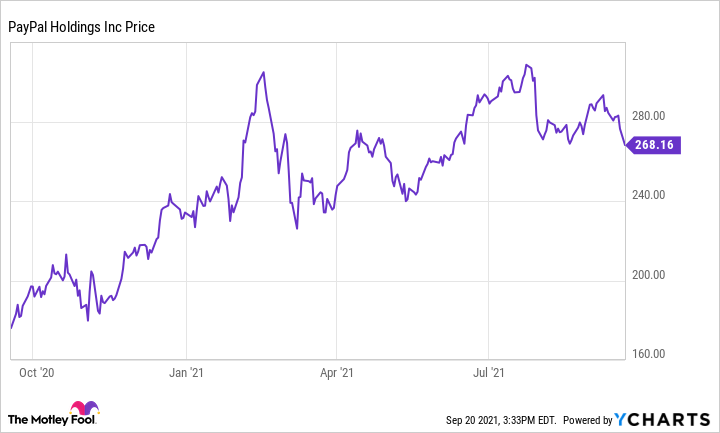 Is PayPal worth considering?

Although any drop in the stock price may foster some investor anxiety, it appears that concerns including competitive threats and a general weakening of confidence in the market have driven the decline. Admittedly, Square's ecosystem and Cash App have become a notable competitive threat. Moreover, PayPal may have to compete more directly with the likes of MercadoLibre in countries that are still bringing banking and financial services to the mainstream.

Nonetheless, the overall fintech industry continues to expand rapidly, and PayPal still stands to benefit. Revenue and a rising stock price indicate that the company can deliver for both customers and investors. Over the next few months, investors should look to a falling stock price with a cautiously optimistic eye: I think this sell-off points to opportunity rather than adversity.