This bank not only offers a strong 3% yield, but it could also be a promising value play.

The September sell-off is proving formidable so far, with the S&P 500 falling nine out of 13 trading days through Monday's close for a quick 4% dip from its recent all-time high. Fears regarding the delta variant, the Federal Reserve's potential tapering of its bond purchases, and now problems in the Chinese real estate market have made investors quite sensitive.

But with declining prices also comes opportunity. Smart investors are currently scanning the market to see what they can grab at a discount. For those investors who love passive income and strong dividend yields, I would highly recommend taking a look at one of the largest banks in the U.S., Citigroup (C -1.13%). Here's why.

Since the Great Recession, Citigroup has generated lackluster returns compared to its big-bank peers: JPMorgan Chase, Bank of America, and even troubled Wells Fargo. Citigroup never really recovered from the financial crisis and has also been facing regulatory issues, which culminated last year with a $400 million civil penalty order and a cease-and-desist order from regulators.

All of these factors have resulted in Citigroup trading at a much lower valuation than its peers. The bank is trading at just 86% of tangible book value (TBV), which is a bank's equity minus its goodwill and intangible assets, and represents what the bank would be worth if it were liquidated. Peers like JPMorgan and Bank of America have recently traded closer to or above 200% TBV. 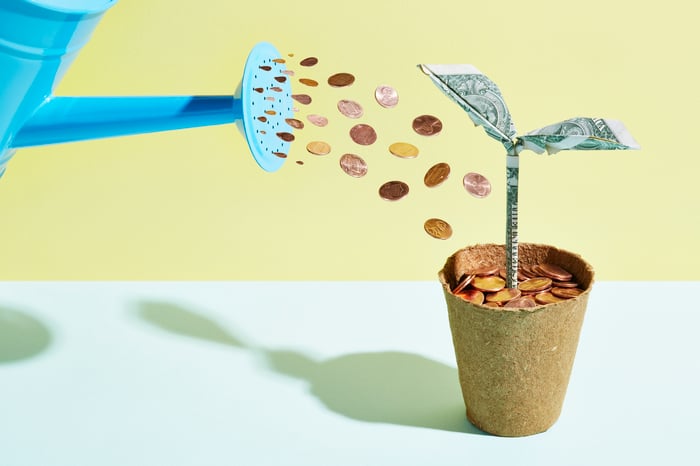 Citigroup has been at a lower valuation than peers for some time, so it's fair to ask why. Is this just another value trap?

I see momentum in the business that hasn't been there in recent years. For one, the bank has a new leader in new CEO Jane Fraser, who is already making efforts to rein in the bank's sprawling and often confusing business. Earlier this year, Citigroup announced it would be winding down and selling its inefficient consumer banking operations in 13 global markets where it doesn't have the scale to compete. Citigroup instead plans to further focus on existing businesses that are already putting up high returns, such as investment banking, securities services, wealth management, and treasury and trade solutions.

Additionally, Citigroup is using excess capital and profits from quarterly earnings to repurchase shares. This is incredibly beneficial when the stock trades below TBV, because the repurchases not only grow earnings per share, but also TBV per share. Considering that banks trade relative to their TBV, a growing TBV is usually good for the stock price. Last quarter, Citigroup grew TBV per share 3%, and I expect it to grow solidly again in the third quarter. Even if the bank traded at its current TBV per share of $77.87, which would be a low valuation for most banks right now (and I think completely reasonable for Citigroup), that implies roughly 16% upside from current levels.

One thing Citigroup does have going for it right now is that its dividend yield is higher than all of its peers, currently at more than 3%. 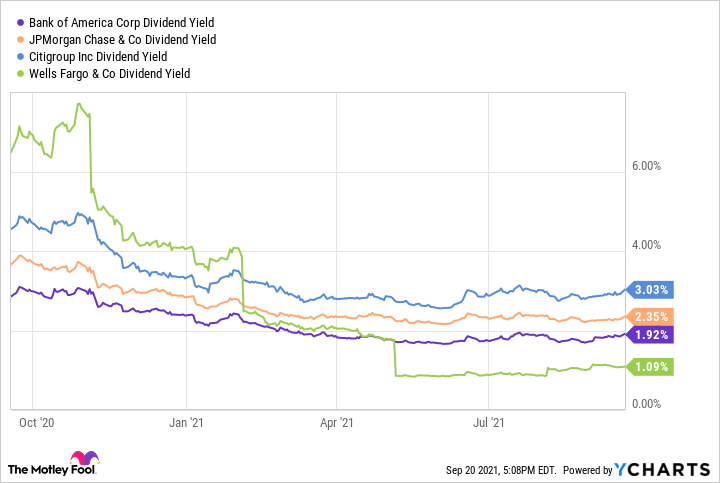 Even if the bank traded close to TBV or slightly above at $80, its yield would still lead the pack at 2.5%.

Additionally, Citigroup's dividend payout ratio -- dividends expressed as a percentage of profits -- is in line with competitors and still fairly low, giving the bank ample opportunity to continue to grow the dividend (although share repurchases are likely the best use of excess capital right now with the bank trading below TBV). 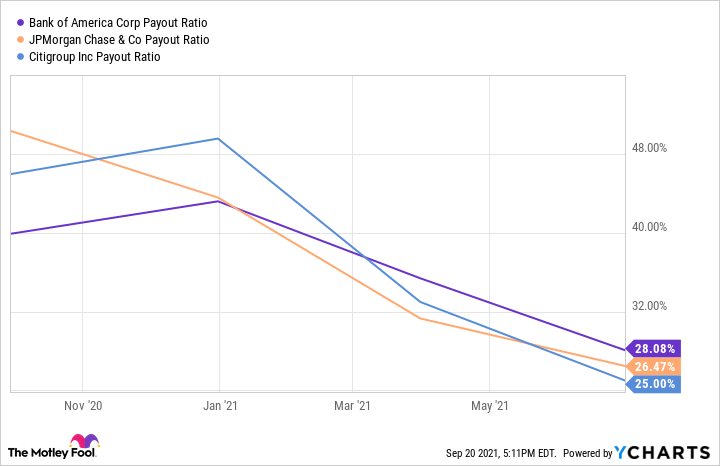 Citigroup stock, already at a depressed valuation, has fallen roughly 6% in September, presenting another opportunity for investors to get in at a good level and on a potentially very strong value stock. There could be some concern in the wider economy with mounting problems for real estate developer China Evergrande Group, as Citigroup does have exposure in the country and large banks in general are impacted by global economic events. But I still think Citigroup's current valuation is far too low, given that the bank now has a real plan in place to simplify the company and enhance returns. And while you wait for the stock to go up, you can enjoy a nice 3% yield -- which is why this is my top dividend stock to buy right now.