The buy-now-pay-later fintech will help Goldman grow Marcus and the rest of its consumer banking franchise.

Recently, the investment banking giant Goldman Sachs (GS -0.51%) announced its intention to purchase the point-of-sale and buy-now-pay-later fintech GreenSky (GSKY) in an all-stock transaction valued at roughly $2.2 billion. GreenSky is a large facilitator of home improvement and elective surgery loans, and allows customers to make purchases and pay them off with multiple payments over a set amount of time.

GreenSky currently services a $9 billion loan portfolio, and since launching, has served roughly 4 million consumers who have taken out roughly $30 billion of loans. Here are three reasons Goldman is dipping into the buy-now-pay-later space and purchasing GreenSky.

For the past few years, Goldman has strived to grow its consumer banking franchise to generate more steady earnings, which can be volatile in the investment banking business. A big part of this strategy has been the bank's launch of its digital bank, Marcus, which offers high-yield savings accounts, loans, and credit cards, and plans to eventually offer checking accounts.

GreenSky will help Marcus grow its loan product offerings, but more importantly, it will help the bank grow its overall user base. Currently, Marcus has about 8 million customers. GreenSky provides a low-cost strategy to acquire not only more customers who will take out high-margin loans, but also customers it can cross-sell other Marcus products to -- whether it's a savings or checking account or maybe a mortgage.

In a slide on the acquisition, Goldman believes GreenSky presents an opportunity to capture a $430 billion home improvement market that provides 20% plus returns at scale.

GreenSky has also built up a network of 10,000-plus merchants that it works with to make the transactions and draw the customers in at point of sale. This segment could be valuable in the future as well. Goldman already offers lots of capital markets and investment banking products that it might be able to sell to these customers.

And who knows, maybe at some point the bank will expand its consumer franchise into business banking. It's certainly not planned or expected, but this segment could be a good jumping-off point if Goldman ever decided to do so.

2. Adding the stability of a bank

Most fintechs tend to struggle to generate the kind of profitability and returns that shareholders desire because they are filling the role of a bank without being an actual licensed bank. Not being a bank has advantages, primarily less regulatory oversight, which enables these fast-moving technology companies to be more nimble and acquire customers in a much more effective manner than a traditional bank.

But the drawback is that fintechs can't gather cheap deposits to help fund loans and therefore must rely on partner banks and warehouse facilities, which increases their cost of funding. GreenSky also relies on partner banks to originate its loans, which likely costs them as well.

With the backing of a massive bank like Goldman, GreenSky will not have to worry about the funding aspect as much, especially with Marcus proving successful at gathering deposits. The bank will also likely be able -- if it wants -- to balance sheet these high-interest loans and collect recurring monthly interest payments.

That is more profitable than selling the loans for a fee, which is primarily how GreenSky makes most of its revenue. Goldman will also be able to offer more resources to GreenSky to improve its tech platform.

3. Not a bad purchase price

Goldman's $2.2 billion offer sent GreenSky's stock soaring more than 50%, but the purchase price is not that crazy a valuation for a somewhat promising buy-now-pay-later fintech company, a sector that is drawing a lot of investor interest right now. On a forward basis and after the Goldman announcement, GreenSky currently trades at 3.8 times sales, 20 times earnings, and 14.3 times earnings before interest, taxes, depreciation, and amortization (EBITDA). 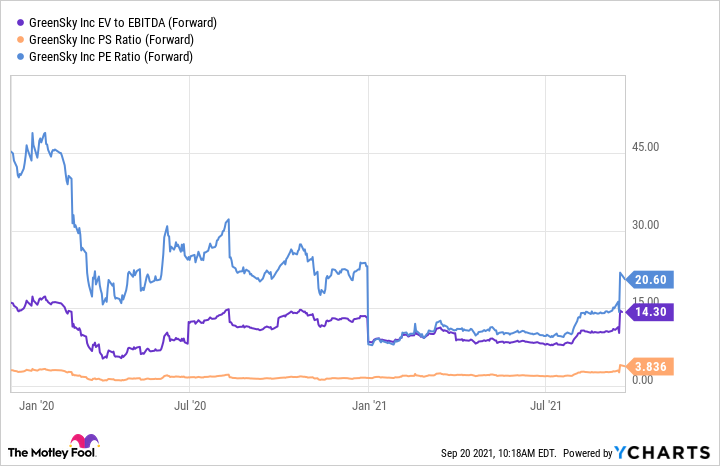 Is it a good move for Goldman?

With Marcus and the consumer banking franchise seemingly on the right path, I do like this deal for Goldman. It offers the consumer banking business a whole new, low-acquisition customer base that it will hopefully be able to cross-sell its other consumer banking products to. I also think the price Goldman is paying is fine, considering how large the bank is and how the stability of the bank should be able to make GreenSky's operations more efficient and profitable.