Shares of Ambarella (NASDAQ:AMBA) climbed sharply higher Monday, surging as much as 10.8%, though the stock ended the trading day up 10.4%.

The company announced that it has partnered with a notable Chinese automaker to build a driver monitoring system, which is already rolling off the assembly line. 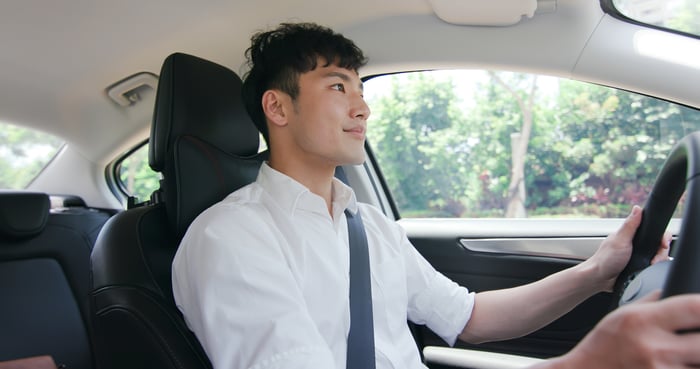 In a press release on Wednesday, Ambarella revealed a collaboration with Dongfeng Fengshen -- a mid to high-end brand within the Dongfeng Motor Group -- to create a cutting-edge system to detect driver distraction and fatigue. The driver monitoring system (DMS) will be based on Ambarella's CV25 artificial intelligence, computer vision, and system-on-a-chip (SoC) technology. The system was included in Dongfeng Fengshen's Yixuan Max model, which launched on Sept. 1, 2021.

The technology, dubbed a fatigue alarm system, will monitor the "driver's behavior and physiological state," to alert the user when they are placing themselves at risk. By tracking eye movements and objects in the surrounding area, the DMS can detect "when the driver is driving dangerously, including while distracted, fatigued, dozing, smoking, talking on the telephone, and other unsafe behaviors." If any of these situations is detected, an alarm will sound, notifying the driver within an established period of time.

This system "promotes driving safety, reduces the possibility of car accidents, and protects the safety of the driver and their property."

European regulators will require DMS systems in vehicles driven within its borders and manufactured beginning in 2025 and beyond. By collaborating with Ambarella now, Dongfeng Fengshen -- which is the flagship product from Dongfeng Passenger Vehicles -- is ahead of the curve.

For Ambarella, this offers additional validation of the company's state-of-the-art technology and could prompt other automakers to tap the company for its AI-powered, computer vision, and SoC systems.