Stocks moved sharply higher on Wednesday, bouncing back from losses earlier in the week. Investors got just about exactly what they wanted to hear from the Federal Reserve's monetary policy committee, which left interest rates in a range between 0% and 0.25% and signaled a potential time frame for starting to pull back on its quantitative easing program. The Dow Jones Industrial Average (^DJI), S&P 500 (^GSPC -0.09%), and Nasdaq Composite (^IXIC) were all up around 1% on the day.

The financial sector has faced some challenges recently as a result of the Fed's actions, as a flatter yield curve has played havoc with net interest income and hurt banks' bottom lines. However, that's arguably been good news for the disruptive fintech companies looking to displace traditional banks.

Both Robinhood Markets (HOOD 2.92%) and SoFi Technologies (SOFI -1.86%) have made forays into the fintech arena, and both stocks made big jumps as investors hoped for positive results from their latest initiatives. Below, we'll look more closely at Robinhood and SoFi to see what generated excitement Wednesday. 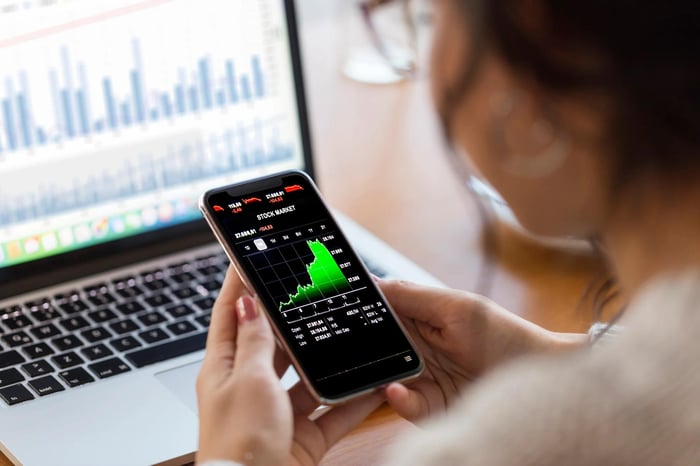 Shares of Robinhood Markets finished higher by nearly 11% on Wednesday. The popular brokerage app expanded its platform's capabilities in the cryptocurrency arena, and investors were pleased to see Robinhood reaffirm its strategic emphasis on crypto as a key growth driver in the long run.

Robinhood revealed that it will start doing a user test of a cryptocurrency wallet product beginning in October. The move will expand what users can do with their crypto tokens, and Robinhood is hopeful that excitement about key niches in the crypto markets could produce a positive impact on its own business.

In particular, Robinhood's crypto wallets will allow users to move digital tokens in and out of brokerage accounts. Although users can buy and sell crypto on Robinhood currently, they have to leave their tokens on the Robinhood platform.

Many crypto traders aren't entirely comfortable with such arrangements, as it takes responsibility for securing their crypto tokens out of their hands and potentially leaves them exposed to cyberattacks on Robinhood and its cryptocurrency custody partners. Moreover, users will be able to participate more fully in areas like non-fungible tokens, which have gained in popularity recently.

Robinhood's lack of added fees on crypto trading gives customers a competitive advantage over using most platforms, which still charge commissions. Wallet functionality, which could become available to the general user base by early 2022, would take that advantage a step further.

SoFi gets a vote of confidence

The praise came from analysts at Jefferies (JEF 0.08%), who initiated coverage of SoFi with a buy rating and a stock price target of $25 per share. Jefferies sees SoFi generating impressive user growth, and that's an essential element of the cross-selling strategy that it and fellow neobanking institutions utilize in order to gain traction and build loyalty among customers. By fostering new-member acquisition, SoFi could see revenue rise at an average annual rate of more than 45% in the next four years.

Moreover, SoFi has even larger aspirations. The company is looking to get a federal banking charter, which would expand SoFi capacity for lending by giving it a single set of regulators at the federal level rather than dealing with 50 different state jurisdictions and regulatory agencies. Moreover, a charter would give SoFi greater autonomy in setting pricing and interest rates, as well as opening doors for its Galileo global payments-processing platform.

Even with today's gains, SoFi's stock is well off its highs over the past year. However, shareholders have hopes that SoFi's long-term aspirations will pay off and deliver even better rewards for their patience.

Dan Caplinger has no position in any of the stocks mentioned. The Motley Fool owns shares of and recommends Jefferies Financial Group Inc. and SoFi Technologies, Inc. The Motley Fool has a disclosure policy.

Robinhood Is Rising, but This Nasdaq Stock Is Tuesday's Big Early Winner

Robinhood's Down, but This Nasdaq Stock's Fall Is More Surprising
370%