The end of virtual queues for Disney's Hollywood Studios' wildly popular "Star Wars" ride is really just the beginning of the tollbooths.

Today isn't going to be just another day at Walt Disney's (DIS 0.85%) theme park resort in Florida. Star Wars: Rise of the Resistance, the high-tech trackless dark ride that has been dazzling thrill seekers since its debut at Disney's Hollywood Studios in late 2019, is changing the way riders can access the marquee attraction.

Instead of pounding the My Disney Experience app at 7 a.m. or again six hours later to secure a boarding group, aspiring riders will now be able to queue up in the standby line just as they do at every other attraction at the park. It's a big move for a flagship attraction that doesn't have the capacity to entertain everyone who wants to ride on any given day. The shift away from a virtual queue to standby access doesn't make sense at first, but thanks to the looming arrival of the pay-per-ride Lightning Lane+ platform, it's all coming together. Disney's repurposed tourist magnet is about to become a next-level cash machine. 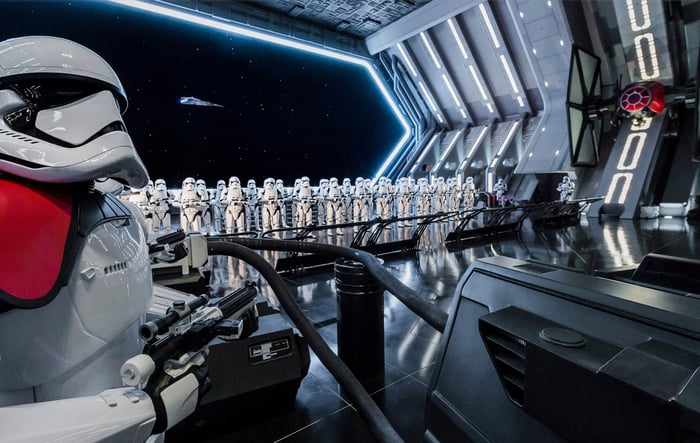 The Stormtroopers pre-show room at Rise of the Resistance. Image source: Disney.

Disney World has been making moves this summer to make its parks pricier and more exclusive. The strategy is naturally not sitting well with many of its hardcore fans. The FastPass system that was freely available to all park guests (but more efficient for holders of annual passes who knew how to master the ride reservation system) is now going behind a paywall.

Guests will have to pay $15 per day for access to the rebranded Lightning Lane expedited queues, part of the new Genie+ premium offering that should kick in soon. Then we get to the handful of elite attractions under the Lightning Lane+ banner. Those rides will require guests to pay up for a single ride. Disneyland Paris introduced a somewhat similar program this summer with visitors paying between $9 and $18 per ride for access to the expedited Premier Access lines. Rise of the Resistance is going to stretch the limits of how much Disney can charge for Lightning Lane+.

Time is money for visitors, and when the standby line gets to be a couple of hours long (and it will be that way for this particular attraction), folks won't flinch at paying $20 to $30 a head to experience the next-gen attraction. Annual-pass holders paying less than $4 a day for access to Disney World's four gated attractions will balk at paying up for access, but non-regulars paying as much as $143 next month for a one-day ticket won't flinch at paying for Genie+ and select Lightning Lane+ access.

It's just smart tourist math. If you're paying $143 for a 10-hour day at Disney's Hollywood Studios, why wouldn't you pay $30 to get on the park's most jaw-dropping ride and save a couple of hours in the process to enjoy other attractions? The standby line for Rise of the Resistance will be the slowest-moving line in the entire resort, largely because of the high number of Lightning Lane+ customers.

Today may seem to be just another Disney day, but it will be a case study in business practices for years to come. It's a gamble for Disney, even though most major theme park and amusement park operators have premium-priced access to expedited queues. It will be interesting to see how Lightning Lane+ prices play out over time, as clearly guests will be willing to pay more the longer the standby line is at any point.

Disney is getting skewered on social media for the cash grab, but in reality, the bellwether travel and tourism stock is simply making up for lost time. It's late to the premium-queue game, and it's going to make a lot of money this way.